Couple make £38,000 selling home renovated on Love it or Leave It

A couple have revealed how they made £38,000 after selling their ‘ugly’ home renovated on Kirstie and Phil’s Love it or Leave it in 2016.

Lucia and Matt Calune, from Wiltshire, appeared on the programme three years ago, and deemed their 1960s house ‘ugly’ and impractical.

Following Kirstie’s advice, they renovated the £300,000 property, knocking together a cramped kitchen and boxy dining room to build a huge kitchen-diner and simplifying the downstairs of their four-bedroom house.

But as Kirstie revisited the couple tonight, she discovered they’d gone on to sell the renovated house for £365,000, making back the £20,000 spent on renovations, plus an additional £38,000, with Lucia saying: ‘[Kirstie’s renovations] obviously helped us sell the house, and at a really good price.’ 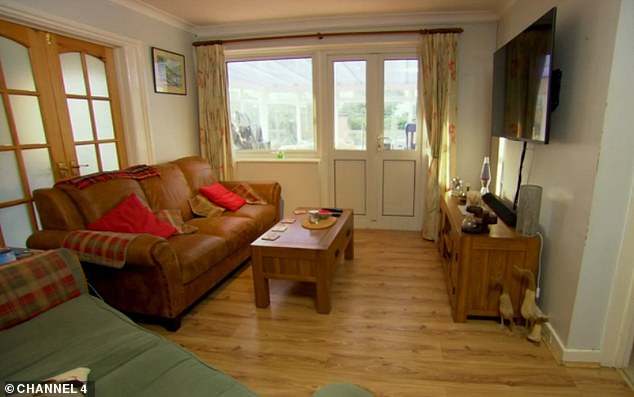 Before: The couple’s home was cramped and impractical, with one of the main lounges being treated as a ‘corridor’ before the renovation 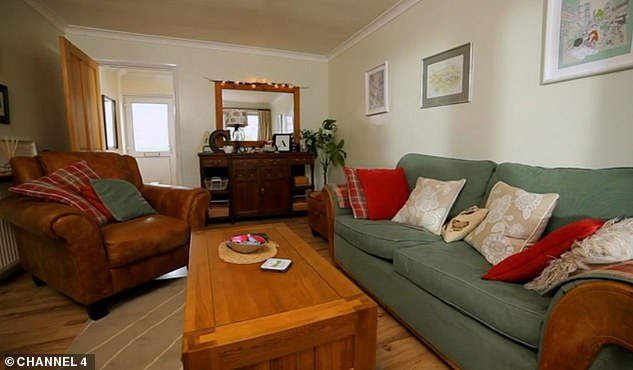 After: The couple also moved the double doors which had been in their lounge, creating a cosy living space rather than a through-way 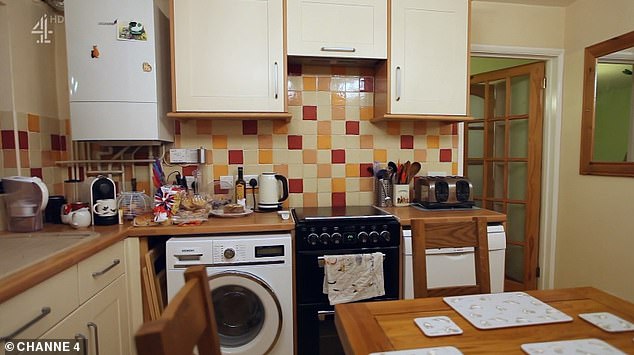 Before: Meanwhile the cramped kitchen was unsuitable for the family of four living in the property before Kirstie’s suggested renovations 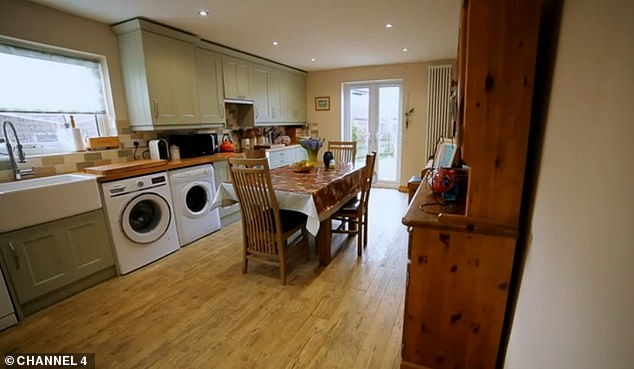 After: Following Kirstie’s guidance, the couple renovated the property, creating a huge kitchen-diner room by knocking two box rooms together

The couple, who lived in Royal Wooton Basset in Wiltshire, were split over their 1960s style home when they first appeared on the programme.

Meanwhile school caretaker Matt said: ‘It’s got everything we need ,it’s a lovely house. It’s got space, it’s got convenience.’

The couple, who had  six children from previous marriages and three who still lived at home, as well as four cats, two rescue dogs and rescue chickens. 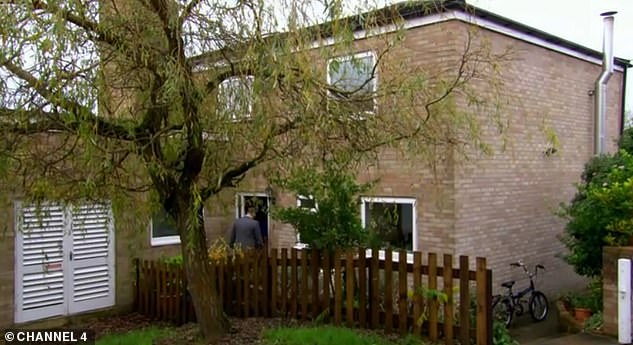 The four-bedroom house was valued at £300,000 at the start of the programme, but after the renovations the couple went on to sell it for £365,000

The downstairs of the property had an impractical layout, with doors leading from one boxy room to the next.

The cats had the run of the conservatory, and the dogs had the space in the dining room.

She said she was keen to create a simplified layout with cosy lounges, as opposed to two ‘sitting areas’, and create a larger kitchen which Lucia can be proud of. 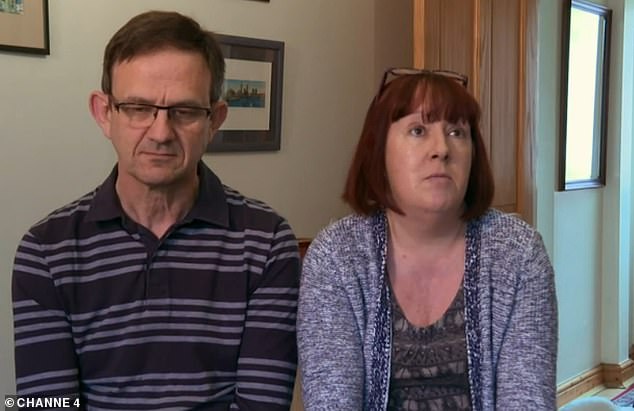 Lucia and Matt Calune revealed they had sold their home renovated on Channel 4’s Kirstie and Phil’s Love it or Leave it, which aired at 8pm, and made £38,000 in profit 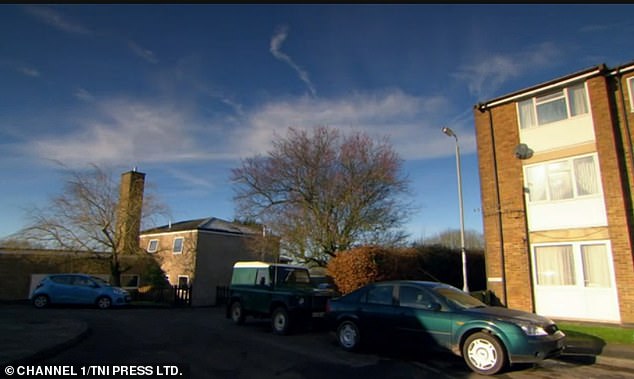 Kirstie went on to say the jumbled living space had to be reorganised to convince them that anything was possible in the home.

Lucia revealed: ‘I don’t need a house as big as this, but a better design of house, where the space is more usuable.’

She suggested creating an open plan space in the kitchen diner, as well as moving the doors within the rooms downstairs to create more space and simplify the flow of the ground floor.

Lucia said: ‘I think it will help sell the house, so I’m happy to go ahead.’ 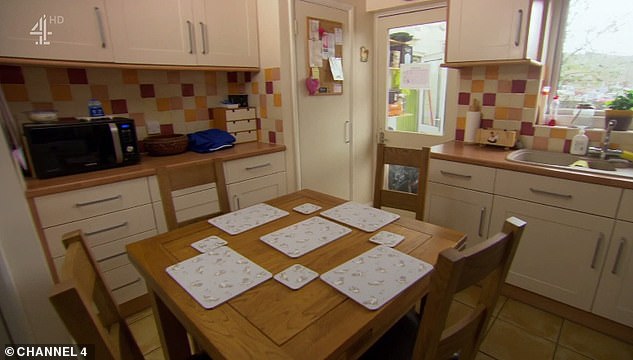 Before: Kirstie had been unimpressed by the cramped and inconveniently sized kitchen, and suggested the couple knock through one of the walls to create a larger room 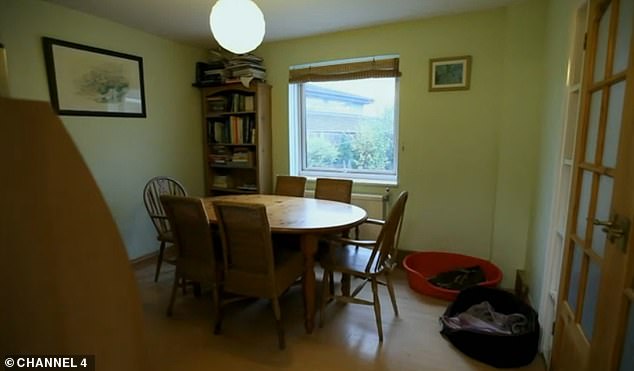 Before: The new kitchen was created when the kitchen was knocked into the dining room – a room which had been taken over by the family’s pets 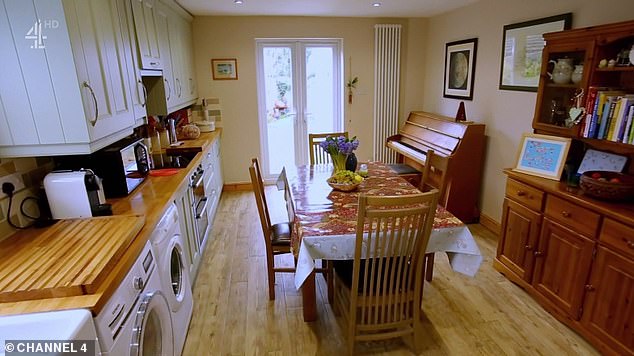 After: The couple’s kitchen was transformed by knocking together the two boxy rooms, and putting in french doors into the garden

Seven weeks later, the couple went ahead with the building work, but it was fast work, and within a month it was complete.

By doing some of the work themselves, they’d been able to save money and splash out on other areas, such as adding french doors to the kitchen.

Having been shown around the new build, Phil admitted he was ‘blown away’ by the new kitchen, which saw two ‘box rooms’ combined.

And they moved two doors within the house to stop one of the living rooms being used as a corridor. 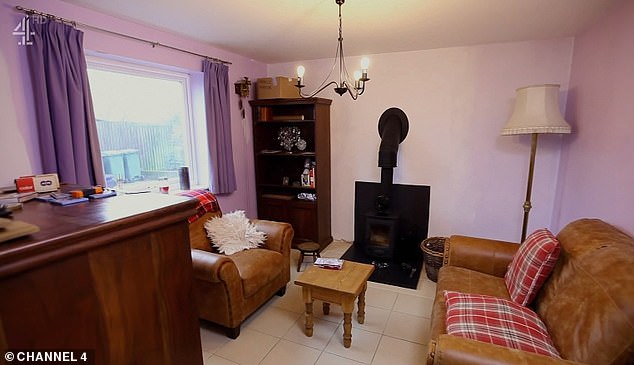 Before: A boxy sitting room had been inconveniently located off their main lounge, so Kirsty suggested moving the door to create a more ‘cosy’ space 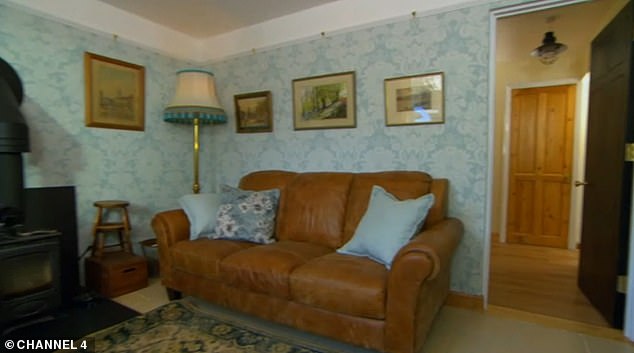 After: The couple’s ‘snug’ room, which they likened to a ‘Victorian parlour’ was created simply by moving the location of the door into the room

Meanwhile by removing the old snug door from the main lounge, and creating a new entrance, it created a cosy ‘Victorian parlour’ space for Lucia and Matt to relax.

Other rooms, like the conservatory, and the upstairs of the house, remained untouched in the renovations.

But despite the couple’s incredible new layout on their house, they decided they still wanted to move.

Lucia said: ‘I do love the house but I would still happily move. I’m glad that we’ve been able to realise it’s potential before moving on.’ 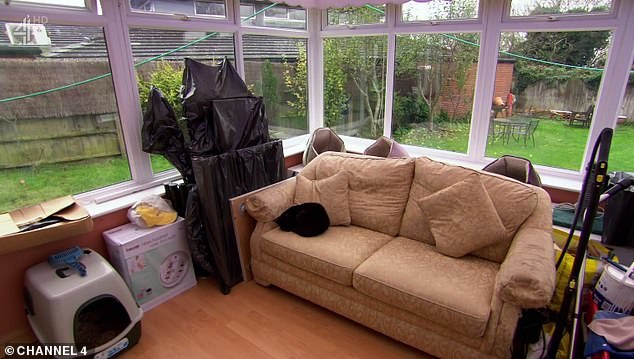 Meanwhile Matt explained: ‘Having been able to do this, I have now realised I am able to cope with moving.’

And when Kirstie went to catch up with the couple earlier this year, she discovered the house-sale had been hugely successful.

Lucia revealed that the day after the house was put on the market, it was snapped up. 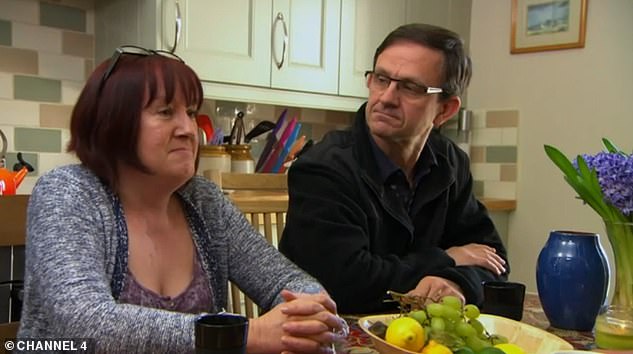 The couple remained determined to move however, and sold their home for £365,000 one year after appearing on the programme

The difference meant they more than made back what they’d invested in the renovation, plus some extra profit, which meant they’d been able to buy their next home mortgage free.

The couple brought the 1970s bungalow in the heart of rural Wales, fifty miles north of Swansea, for £275,000.

Now both retired, and with all their children flown the nest, they sacrificed convenience for provincial charm.

She said: ‘We looked all over England, we looked as far as Scotland and we thought Wales is going to offer us so much we were looking for.’ 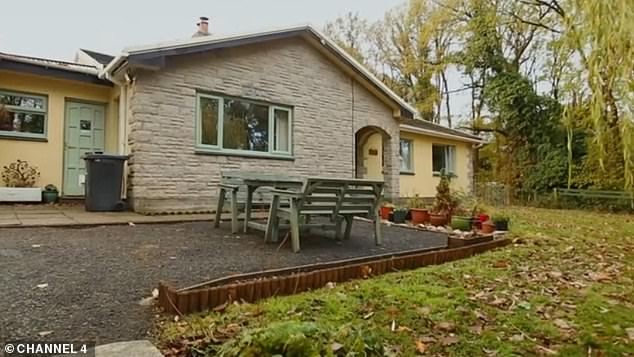 Lucia  and Matt went on to move to a rural retreat in Wales, fifty miles from Swansea, and said selling their home for ‘a really good price’ allowed them to live mortgage free 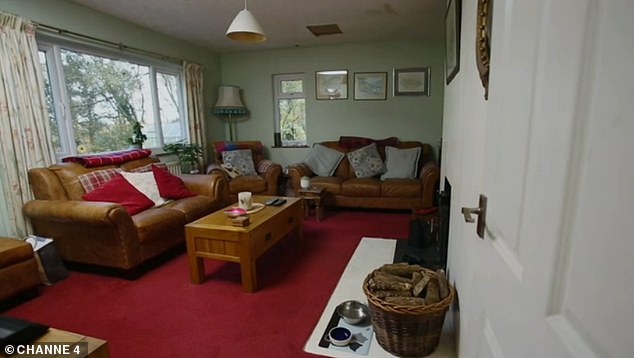 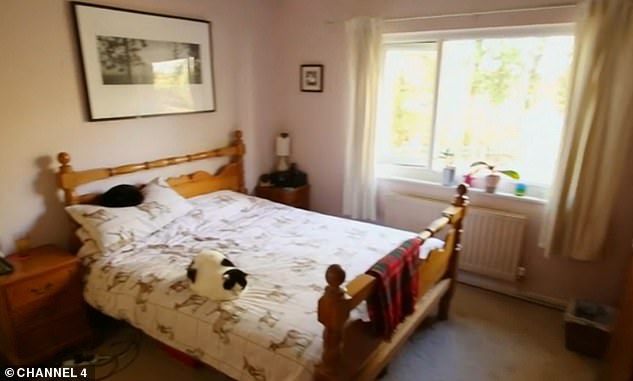 Following the programme, Matt and Lucia went on to relocate to a three bedroom 1970s style bungalow in rural Wales

Matt credited the programme with giving him the confidence he needed to move, saying: ‘I needed a kick up the bum. I needed somebody else to say you need to do this.’

Meanwhile, Lucia said Kirstie’s suggested renovations had ‘obviously helped us sell the house, and at a really good price.’

Along with a paddock, the couple have over an acre of land and an outdoor chicken run. 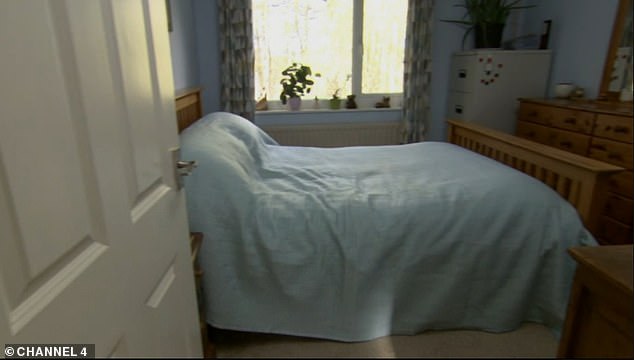 Matt and Lucia said they adored their new three bedroom home in rural Wales, which had everything they needed 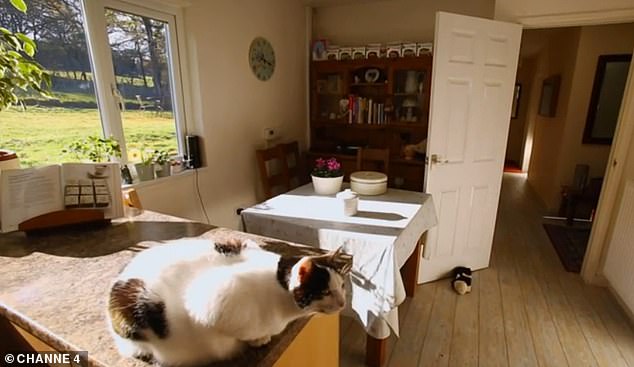 The couple said they loved their new bungalow home, which they bought mortgage free thanks to the profit made on their old home

But they added that they weren’t sure if it would be their ‘forever home’ as Lucia’s health had deteriorated since the programme.

She has been living for years with Crohns disease and may need medical care at times, which was hard to access from the remote property.