A couple whose penchant for walking around their house naked prompted a complaint from a neighbour have defied their critics – by appearing on This Morning nude.

Karin Stone, 33, and her husband Jay, 34, were stunned when they received an anonymous letter through their door asking them to close their blinds, as the author was fed up of seeing their ‘big bum, big boobs and little willy’.

Rather than covering up, the couple appeared naked via video link on the ITV chat show to defend themselves on Tuesday – insisting they aren’t exhibitionists and were simply going about their day to day lives when neighbours caught a glimpse

Despite their protests, not all viewers were convinced, with some taking to Twitter to accuse them of ‘attention seeking’. 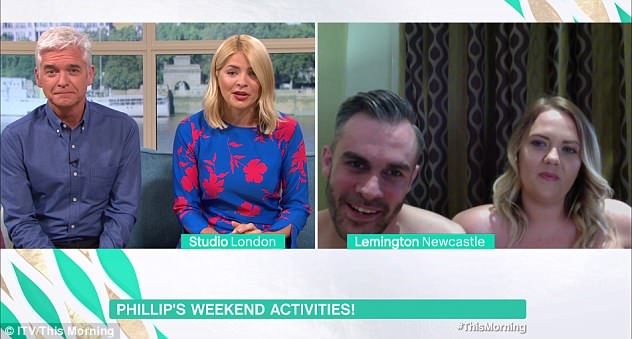 Karin Stone, 33, and her husband Jay, 34, appeared on This Morning completely naked on Tuesday

The couple, from Lemington in Newcastle, appeared on This Morning via webcam, with their modesty protected only by the careful camera angle.

Holly and Phil appeared shocked by their lack of clothes, with the latter saying ‘Look at you!’

Holly giggled: ‘You are fully committed to this cause this morning, we can see.’

Karin, an office manager, admitted it had been a ‘shock’ to receive the note because they weren’t aware they were being seen naked. The note asked them to close their blinds as the neighbours were sick of seeing their ‘big bum, big boobs and little willy’ 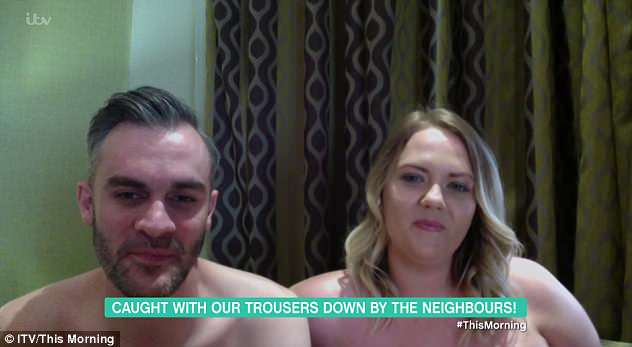 She said: ‘I think for me it was quite a shock really because we didn’t think about it. It’s not as if we’re dancing at the window naked, we’re just going about our general life.

‘I think if they had just come to the door and knocked on the door and said ”Look, you’ve got a privacy issue” we probably would have taken it a bit more seriously, but like you say, the note is really rude, so we’re not going to change much.’

But viewers weren’t convinced by the interview, and took to Twitter to question their motives for appearing naked.

One tweeted: ‘Jesus wept, this couple have been everywhere over the weekend. Hardly a situation to be proud of! We’ll be seeing them on Big Brother or in the jungle next. Sad.’ 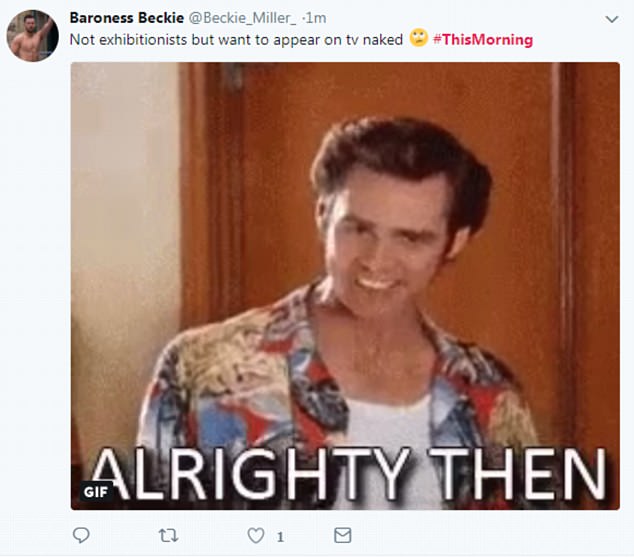 Viewers took to Twitter to slam the couple’s stunt, calling them ‘attention seeking’

‘Not exhibitionists but want to appear on tv naked,’ another said, followed by the eye roll emoji.

A third ranted: ‘Put your clothes on and p*** off you attention seekers.’

The note, which was posted through the couple’s letterbox, read: ‘Would you please close your blinds when getting dressed or undressing.

‘We are sick of seeing big bum big boobs and little willy [sic] and we will report you both for indecent exposure. Your neighbours.’

They responded to the letter by posting their own note in the window of their house. 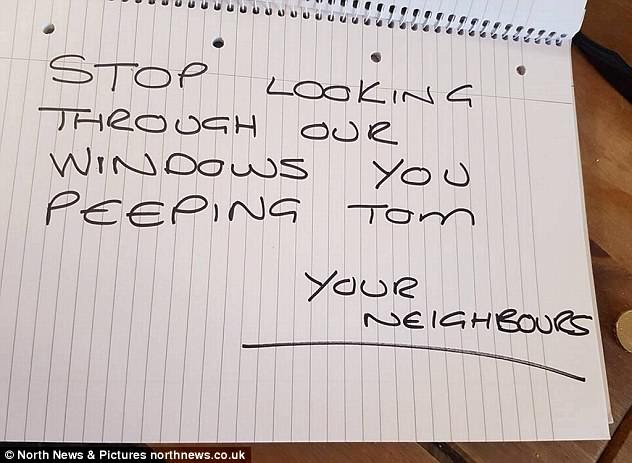 They responded to the letter by posting their own note in the window of their house, calling the neighbour a ‘peeping tom’

It says: ‘STOP LOOKING THROUGH OUR WINDOWS YOU PEEPING TOM – YOUR NEIGHBOURS’

The couple don’t know who posted the note, but revealed today that they suspect they are close to working it out.

Jay, a DJ, said: ‘We have an idea who sent it. We have a neighbour who receives Christmas cards from various neighbours. He’s seen the note and thinks the handwriting matches up with a card he received this year, last Christmas just gone.

‘We’re waiting for him to come back and he’s going to come over and we’ll try and see if it matches up, and maybe write a note back.’