The operator of a cruise ship that sailed off the coast of Argentina in the same week the deadly coronavirus was declared a global pandemic has been described as "irresponsible" by Australian medical experts.

Seventy per cent of the 112 passengers who stepped off a repatriation flight from Uruguay at Melbourne's airport on Sunday morning have tested positive for COVID-19.

Baggage handlers clad in hazmat suits loaded suitcases at Tullamarine, while the Australian and New Zealander passengers who had been stranded on the Greg Mortimer luxury cruise for more than two weeks were assessed by medical staff at the airport.

One passenger was hospitalised and the others were sent directly to a 14-day quarantine in hotels, where they will receive daily medical checks. 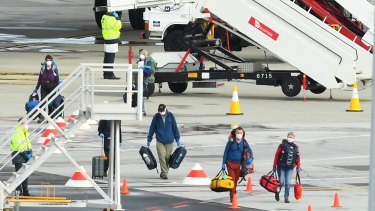 Passengers from the cruise ship, Greg Mortimer, arrive at Melbourne Airport from Uruguay.Credit:AAP

Experts have applauded moves by government and health officials to immediately transfer passengers to quarantine or hospital upon arrival, saying the incident was evidence that lessons had been learnt from the Ruby Princess cruise ship fiasco.

As authorities seek to return the remaining 160 Australians still stranded on cruise ships around the world, medical professors say the cruise industry has been slow to respond to the threat of COVID-19 and must now take “hard look at itself”.

The University of New South Wales' epidemiology expert, Mary-Louise McLaws, who is a technical adviser to the World Health Organisation, criticised Aurora Expeditions' decision to go ahead with its Greg Mortimer cruise on March 15 – four days after the WHO had declared the coronavirus a pandemic. 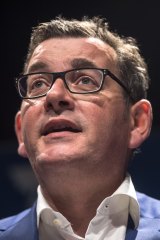 Victorian Premier Daniel Andrews said the repatriation mission was a “complex task that has been managed well” and was “not comparable” with the Ruby Princess debacle.

“Their right to return to their home is paramount, and we simply weren't going to allow them to be left on the other side of the world without, possibly, the care and attention that they needed," he said.

Passengers on the charter flight included 96 Australians and 16 New Zealanders, while a further eight passengers from the US and Europe are still on board the ship in South America, waiting to be evacuated.

A spokesman for the Cruise Lines International Association representing the industry said companies started suspending operations from March 13 and had since been working with government authorities to return passengers home.

“Only a handful of vessels remain to disembark guests and these are making their way to ports. Other ships are either berthed in ports, anchored at sea, or repositioning without passengers on board.”