So the trains are going to be late! How very British: ALEX BRUMMER says Crossrail is yet another sorry saga of spiralling costs and tedious hold-ups

The hype surrounding the £15billion Crossrail project has been extraordinary. Breathlessly described as Europe’s biggest infrastructure project and the most complex piece of engineering ever attempted, it has been presented as a resounding demonstration that we are still every bit as good at public works as our Victorian forebears.

In response, across the capital, residents, commuters and businesses have endured a decade of disruption with great stoicism. The endless drilling, cracked walls and cancelled trains have – remarkably – been accepted as a price worth paying.

With its wide, safe platforms, architect-designed stations and – foremost in people’s minds after our sizzling summer – air-conditioned carriages, the December 9 opening of Crossrail, or the Elizabeth Line as it will be known, has long been in the diary as the day the capital gets a new train line it can really be proud of. 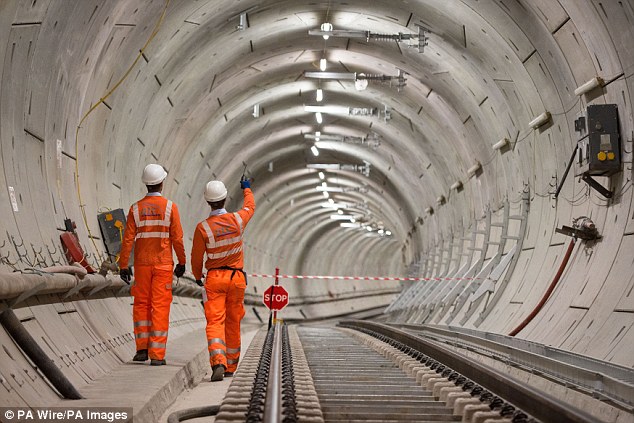 With its wide, safe platforms, architect-designed stations and – foremost in people’s minds after our sizzling summer – air-conditioned carriages, the December 9 opening of Crossrail, or the Elizabeth Line as it will be known, has long been in the diary as the day the capital gets a new train line it can really be proud of

But as the grand opening approaches, now we learn that this magnificent British infrastructure project is not just going to be over budget, it’s also going to be late.

Instead of a triumph harking back to the days of Isambard Kingdom Brunel, it has turned into the same sorry saga of spiralling costs and tedious hold-ups as Heathrow’s Terminal Five, the launch of the new Thameslink trains, and the abandoned electrification of the trans-Pennine rail route from Manchester to Leeds. In Japan and in parts of America they work around the clock, on public holidays and during every waking hour to ensure that promised developments are delivered on time and with minimal chaos.

Here, we just seem to shrug our shoulders and pretend everything is fine. In the case of Crossrail the bills were rising even while we were being assured that everything was on track. The Government has already had to come up with £600million extra and Transport for London another £150million to support the project. The upshot will almost certainly be higher fares for passengers and no central section to speak of until autumn next year.

Officials say that 94 per cent of the job is done. However, when the outstanding work consists of some of the most frustrating tasks – including safety checks – the optimistic tone struck by this claim is unconvincing.

Passing the final tests, in our age of health and safety, can be the hardest part of the entire project. Just ask supporters of Tottenham Hotspur, who are still watching their team play at Wembley because issues with ‘critical safety systems’ prevented the new White Hart Lane stadium opening in time for the start of the football season.

This paper has long been sceptical about the £56billion HS2 project providing high- speed rail travel between London, Birmingham and eventually Manchester.

But it has always been my personal view that, like the Victorians, we ought to bite the bullet and leave something memorable and economically beneficial for generations to come. Tinkering with commuter lines and building better roundabouts, despite the importance of secondary projects, just don’t make the same statement as a major new development.

With the Elizabeth Line estimated to boost the capital’s rail capacity by 10 per cent, the potential benefits of taking an ambitious approach are clear.

Sadly, when we look at the real Crossrail, as opposed to the dazzling fictional vision we have been sold, it’s impossible not to wonder whether Britain plc will ever be capable of delivering something so complex and expensive.