Cult of KAWS: from the street to Sotheby’s

The NGV is accustomed to its Design Store selling out of blockbuster exhibition merchandise – the Escher-inspired tea towels, terracotta warrior tote bags – but its upcoming KAWS show is likely to eclipse anything that's come before.

KAWS: Companionship in the Age of Loneliness is the first Australian exhibition for American artist KAWS – real name Brian Donnelly – and it will likely have already sold out of exhibition merch by the time you read this. 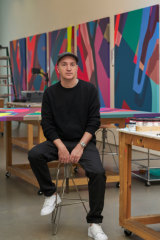 Brian Donnelly, aka KAWS, in his Brooklyn studio.

A former street artist, KAWS sits in something of a unique artistic space, commanding as much respect from millionaire collectors as he does from millennial students; one of his paintings sold for $22 million at Sotheby's in Hong Kong earlier this year (despite an initial estimate of about $1.5 million), but his limited run T-shirts retail at about $14.

And his high-street offerings bring out the same rabid competitiveness as the high-end auctions. His June collaboration for Japanese fashion retailer Uniqlo – a line of T-shirts for adults, one for children and a series of tote bags – caused a frenzy in one shopping centre in China, with crowds gathering ahead of the special midnight opening, stampeding the store and fighting each other to reach the merchandise. Video footage shows customers punching each other and T-shirts being torn from mannequins while staff look on, bewildered. The entire stock sold out within minutes.

Dr Simon Maidment, NGV's senior curator in contemporary art and the exhibition curator, has seen the video and concedes it was alarming.

"It had our security team nervous for the pop-up shop," he says, adding that in the three years he's been working with Donnelly on the exhibition, the artist's popularity, particularly in Asia, has ballooned. "It'll be fascinating to see the response too, in particular, from the local south-east Asian student community here."

The exhibition, Maidment says, is a departure from much of the NGV's usual offerings. "And quite different for gallery programming in general, which is why he's been such a divisive figure. There are definitely two camps in the art world about his work."

Straddling the worlds of art, commercial design and even fashion, New Jersey-born Donnelly, who adopted the name KAWS as a graffiti artist in the early '90s (it has no deeper meaning; he liked the way the letters worked together), made a name for himself with "subvertising", illegally adding his tag to advertisements in public spaces.

He studied illustration at art school and worked as a background animator for Disney before launching his own store in Japan, Original Fake, for which he created streetwear and collectible vinyl toys, including his now-signature figure Companion, a sort of humanoid Mickey Mouse gone bad with skull-like face and XXs for eyes, and BFF, a muppet gone awry that comes in a range of candy colours and plush toy iterations.

The store, which operated from 2006 until 2013, cemented KAWS' brand, and his vinyl toys became cult collectibles. He was soon in demand for collaborations with fashion labels from Dior to Comme Des Garcons and Nike, and counts celebrities among his fans, from fellow artists to rappers such as Pharrell Williams (who reportedly has an entire room of KAWS artworks) and Kanye West; his artwork featured on the cover of West's 2008 album, 808s & Heartbreak. 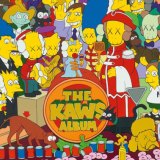 KAWS’ artwork THE KAWS ALBUM, which sold for more than $22 million at Sotheby’s.

In 2012 he created a 12-metre balloon version of Companion for the Macy's Thanksgiving Day parade, and in 2013 he reimagined the award design for the 30th anniversary of the MTV video music awards.

Still, the Sotheby's sale took the art world by surprise; what made the sale more remarkable was the work's subject matter. The 2005 piece, THE KAWS ALBUM, is a riff on a riff on the cover of the Beatles 1967 album cover for Sgt. Pepper's Lonely Hearts Club Band. KAWS' work is a parody of a parody from The Simpsons cartoon.

Donnelly – as surprised as anyone at the hammer price – doesn't find his crossover appeal unusual. "I never aim to please everybody, so it's not weird for me," he says.

"I just aim to create work that's true to my interests, and where I feel like I fit… When I started Original Fake, I said, 'I don't care about galleries' and I fully delved into the commercial world. In the '90s when I was first doing commercial work, people were very clear that you can take this road and be a fine artist, or another and be a commercial artist," he says.

"So I just made the work that I wanted to make and … let the chips fall as they do."

Having to choose one path was "a dominating stance in the art world" for years, he says. "But things are changing. And things will continue to change. I can only be honest to myself – that's kind of what comes out."

This year alone, Donnelly's varied output has included the travelling installation Kaws: Holiday, which saw a 37-metre-long inflatable sculpture of his Companion float in Hong Kong's Victoria Harbour during the city's Art Basel, after appearing in Seoul and Taipei; a monumental BFF, constructed entirely from flowers for fashion house Dior at Paris Fashion Week; that auction; and several gallery shows around the world. 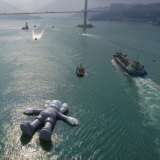 Donnelly is part of a new breed of artists who embrace social media to promote not only his own practice, but that of other artists. His 2.4 million Instagram followers might not be able to see his giant inflatable installations in situ, but they can follow his Instagram updates.

"Only 10, 15 years ago, you'd wonder what's going on in galleries and museums – it was more intimidating, and I think now younger people are becoming very familiar and comfortable and knowledgeable about what they're interested in," Donnelly says.

The idea of making art accessible is, of course, not new.

"Keith (Haring) did that with the Pop Shop, and there's a long history of artists who have worked with making objects and designs like Noguchi, and Picasso used to make ceramics in that way of having more accessible works," Donnelly says. "It's not really new, it's just, now the capabilities – enter a Macintosh, all this stuff you can do in your own space, is really good."

We're at his sleek studio in Brooklyn, filled with artworks he's collected; it's an eclectic mix, from Pop Art predecessor Peter Saul to punk artist Raymond Pettibon, outsider artist Henry Darger and Keith Haring, a key influence on his own work. Donnelly has lent some of his Haring pieces to the NGV for the upcoming Keith Haring | Jean-Michel Basquiat: Crossing Lines at NGV, and it's no coincidence that the two exhibitions overlap.

"It was important, given this is Brian's first show in this country, to show the lineage," says Maidment. "It's a great opportunity to show people Brian's work and … the lineage he is continuing – that work in the street and also the democratisation of art that Haring was so heavily involved in with the Pop Shop. He really comes out of that New York, Manhattan street lineage, as do both those artists." 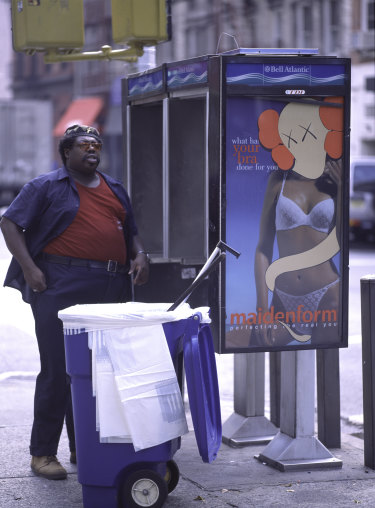 KAWS: Companionship in the Age of Loneliness, one of Donnelly's biggest shows to date, is a survey which encompasses his career, from high school sketch books to traditional graffiti and photography of his 1990s "subvertising".

As well as painting on billboards, Donnelly used to break into bus shelters and phone box ads ("They had master locks that were very easy to open") and add his own "tag" and iconography, before relocking the doors, "to create something that seemed like part of the campaign".

These works were, of course, ephemeral, but Donnelly photographed many. "Growing up, looking at the guys who did graffiti before me, I knew that the only thing that exists in the end is the photos of the work on the street."

Some of these advertisements were themselves pilfered and 20 years later Donnelly found himself bidding on one at auction – an ad for a Keith Haring exhibition from 1997.

The show will also feature Donnelly's paintings reworking pop culture icons such as Snoopy, Bambi and Sesame Street, many of his human-scale sculptural figures and a specially commissioned monumental sculpture that will be acquired for the NGV's permanent collection.

Donnelly and his team have worked on the sculpture for the past year, and it's his largest bronze to date.

"I'm super-excited about this one, it's incredible," he says. "I've worked large in bronze before but this is a whole new undertaking – it's as wide as it is tall." 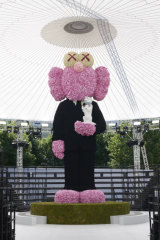 Titled Gone, the mammoth seven-metre sculpture, which will be displayed in the gallery's covered courtyard, is an iteration of his Companion character carrying a seemingly lifeless BFF, and seems to exude an underlying sadness. (A collectible vinyl version will also be released the day the exhibition opens.)

Many of his figures seem downcast, even despairing, but Donnelly is reticent to ascribe too much meaning to his work. His first Companion, he says, was "very static" but over the years he has injected more human qualities into them, giving them "empathy with human situations," he says.

Maidment, though, says his curatorial framing of the show will reflect the current state of the world.

"Brian and I have spoken at length about the various things happening in his country and around the world; the rise of toxic public discourse and various violence within his own country and around the world," he says. "He feels passionately about those things, although he wouldn't consider himself to be making work that is particularly political. But I think it does speak in some ways to the social and political atmosphere of our times."

Maidment wanted to add something different from the discourse around KAWS; a lot of the thinking behind Donnelly's work, he says, is often "skipped over" because of its accessibility.

Donnelly's appropriation of pop culture icons (none of which are licensed, and none of which have as yet attracted any legal notices) represent key pop-cultural touchstones.

"Each of those, from Fat Albert, Snoopy through to the Smurfs and The Simpsons, made an impact and … defined different generations in a way," says Maidment; Fat Albert is acknowledged as an early series that depicted black characters positively, Snoopy's influence was global, likewise the Smurfs in the 1980s and The Simpsons in the '90s.

Maidment sees these works as an evolution of Donnelly's early graffiti work.

"In some way, graffiti artists try to intervene in this built environment that is somehow impervious to reflecting them back. It's a representation of a bigger world they feel they have no agency within, so making a mark in that space, seeing your name was somewhat empowering," he explains. "It's the same impulse at work … where he's repainted and made very slight interventions, to see his character, KAWS, reflected back in all of these key series that helped define the generations."

Maidment admits he's not sure what to expect from the show, audience-wise – at least from the traditional art world. He says anecdotally there's enthusiasm from people who wouldn't necessarily go to museum shows.

"But I'm also looking forward to our more core audience being exposed to something different at the NGV."

KAWS: Companionship in the Age of Loneliness, NGV International until March 1, 2020.
The writer travelled to New York as a guest of the NGV.