DAN HODGES: Why won't either candidate in Batley stand up for teacher?

DAN HODGES: Why won’t either the Labour or Tory candidates in Batley stand up for the teacher robbed of his home, his career and his identity?

The light bulbs have been removed from their fittings. I’m in Batley, West Yorkshire.

A few weeks ago this was the home of a teacher at Batley Grammar School.

Then one day, as part of a course on blasphemy, he showed his pupils a cartoon of the Prophet Mohammed.

At which point, he was forced to flee for his life. It’s why he can now only be known as The Teacher. To use his real name would put him and his family in danger.

Several doors down from the empty flat, one of The Teacher’s neighbours – a woman in a hijab – is returning home. I ask if she knew the person who used to live there.

‘No,’ she responds. ‘Yes, we do!’ shouts her excited child. His mother smiles apologetically. ‘Yes, I do.’ What was The Teacher like, I ask. She pauses. I explain I won’t identify her.

‘Very good. A very good neighbour.’ She pauses again. ‘But he doesn’t live here any more.’

The Teacher had been at Batley Grammar for several years. The image he showed during the fateful lesson had been used before.

But on this occasion someone took offence. A complaint was made – and within hours an angry mob had descended on the school gates. 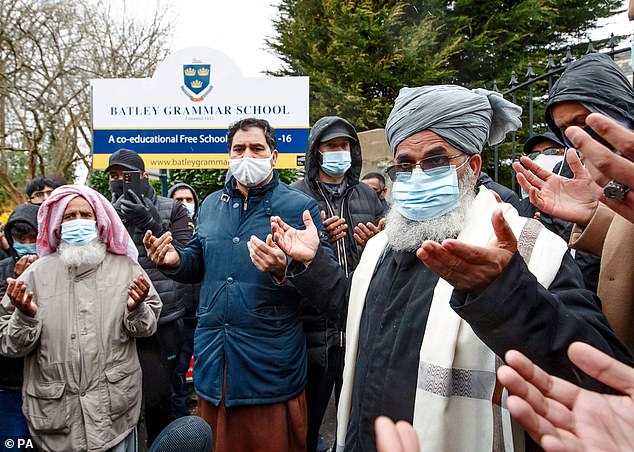 The Teacher had been at Batley Grammar for several years. The image he showed during the fateful lesson had been used before. But on this occasion someone took offence. A complaint was made – and within hours an angry mob had descended on the school gates (pictured, protesters outside Batley Grammar School)

Today, leafy Carlinghow Hill – where that mob assembled – is peaceful. The school has been portrayed in some quarters as some sort of Yorkshire madrassa.

Yet as I walk up to the traditional arched stone entrance, all I can see is a normal, well-maintained co-ed.

The last Ofsted report rated it as ‘Good’. The percentage of pupils meeting the expected standards in reading, writing and maths is above the local authority and English averages.

But a member of staff is missing. In the aftermath of the outcry over the cartoon, The Teacher was suspended pending an investigation.

Batley head Gary Kibble issued an ‘unequivocal apology’ for what he said was a ‘totally inappropriate image’.

Then, last week, the investigation concluded. It found that while the lesson could have been conducted differently, there was no intention to cause offence. It advised the suspension could be lifted.

I’m hoping to speak to Mr Kibble to see if he’s planning to reinstate his staff member. Or at least speak out in support of him.

‘I’m sure he’ll give you a ring,’ the school receptionist tells me politely.

As I turn to leave I see a large sign. ‘Preparing students for life in modern Britain,’ it says. Mr Kibble never calls.

The Teacher was, I’m told, well respected and regarded as ‘friendly and sociable’ by those with children at the school.

But as I stand in the drizzle observing the morning drop-off, I’m again finding it hard to get someone to speak up for him, or agree he should return.

‘We’ve been told he doesn’t want to come back,’ one parent claims. ‘And can you blame him?’

Another tells me: ‘It’s done and dusted. The school has dealt with it. You shouldn’t be here. I don’t know why you’re wasting your time.’

A third parent just shrugs. ‘It is what it is,’ he says.

Every day seems to see a new front opened in our so-called ‘culture war’. But the battleground is invariably trivial. Flags. Anthems. Pictures of the Queen.

There’s nothing trivial about what has happened here. 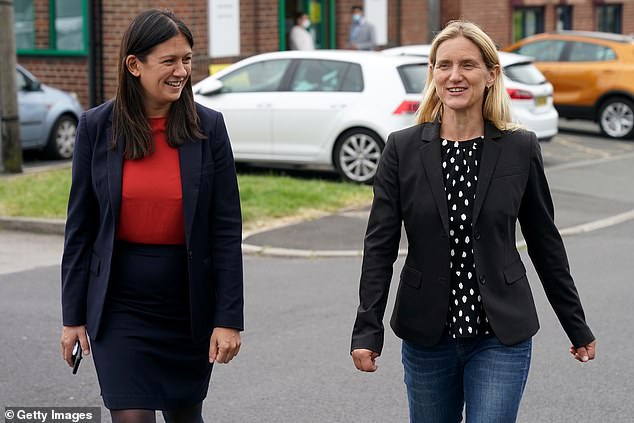 Labour’s Kim Leadbeater (pictured, with the Shadow Foreign Secretary Lisa Nandy) is the sister of murdered MP Jo Cox. When she announced she was running, she said: ‘Jo used to say to me, “If good people don’t step up, then nothing will change”‘

In a quiet British town, a man has been disappeared. Yet this act of erasure has been greeted not by a righteous outcry, but a conspiracy of silence. Both local and national.

Britain’s political class are encamped in Batley in preparation for this week’s by-election.

But attempting to get the candidates of our two main parties to address the vanishing of a respected member of the local community is proving impossible.

Labour’s Kim Leadbeater is the sister of murdered MP Jo Cox. When she announced she was running, she said: ‘Jo used to say to me, “If good people don’t step up, then nothing will change.”’

But despite the fact that she has herself been the subject of vicious abuse during this campaign, I’m unable to get Leadbeater to step up on Batley Grammar.

As I shuttle between her campaign HQs, I’m variously told she’s out on the doorstep, preparing for hustings or ‘at the other office’.

But asked about the issue in an online debate on Wednesday, she reportedly said: ‘We’ve got to have the right to freedom of speech, but we should also be really sensitive to other people’s feelings and opinions.’

She was, she added, ‘satisfied with the results’ of the investigation.

As I leave her office on Wellington Street after another fruitless attempt to meet her, I see a sign in the window. ‘We’re With Kim,’ it reads. Maybe. But Kim isn’t with The Teacher.

Nor is Tory candidate Ryan Stephenson. According to Conservative co-chairman Amanda Milling, Stephenson wants to ‘work with Government on local issues and be a strong voice in Parliament’.

But instead of being strong, he’s currently spending his time cowering from the press and the voters.

Stephenson is, according to his campaign blurb, a member of a Yorkshire academy trust, committed to ensuring ‘all children excel regardless of their background’. And like everyone else, he’s gone AWOL on the issue of Batley Grammar.

I ask Milling – being deployed today as his human shield – what her view is on the school.

‘There have to be lessons learnt,’ she says meekly.

Should The Teacher be allowed to go back, I ask. ‘Yes, and the teacher has been able to return to the school,’ she claims, ‘though I understand he still has concerns about doing so.’

When I query the idea he’s been able to return, she tries to clarify. ‘So my understanding is – from the report – that he’s been reinstated.

I’m not sure if he’s actually gone back to school because he’s still got concerns about the situation.’

So why isn’t Stephenson here, explaining this himself, I ask. ‘Ryan’s out on the doorsteps. He’s been doing lots of interviews with the local press,’ she says. 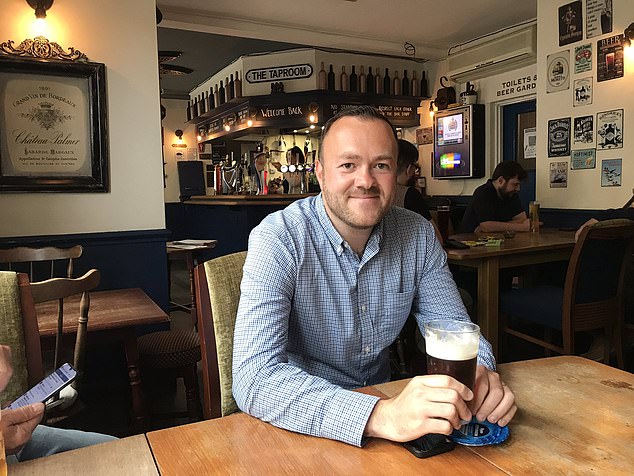 Ryan Stephenson (pictured) is, according to his campaign blurb, a member of a Yorkshire academy trust, committed to ensuring ‘all children excel regardless of their background’. And like everyone else, he’s gone AWOL on the issue of Batley Grammar

But if the two main candidates are running scared of the mob that appeared outside the gates of Batley Grammar, another is not.

‘If I had been the MP, I don’t think this would have happened,’ George Galloway tells me.

‘After what happened in Paris, with the horrific murder of a teacher there, I would have been into the Batley schools. But if it had happened, I would have provided leadership in response to it. Labour ran away.’

According to Galloway, a vacuum was allowed to develop that was exploited by what he calls ‘extremists’ from out of the area. ‘

If it had been me here, I’d have been outside the school, and I’d have told everyone to go away. I’d have calmed the situation down.’

Clear enough. But on the issue of the cartoon itself, he’s more equivocal.

‘Parents have a right to know, and have a say, in what is taught in their schools. Not just on this matter, on all other matters. All over the country, people of all colours and creeds are not happy about the kinds of things being taught to their children, particularly of a very young age. And I’m one of them.’

I ask him the question I would have liked to ask Leadbeater and Stephenson. Should The Teacher be reinstated?

‘If he wants to be, of course he should. His life and his safety are not in any danger from local people. But I think there are Islamist extremists in the country – the ISIS mindset exists in this country, it’s a significant problem for us – so in so far as that teacher is in danger from that kind of extremism, then we must all rally round him and support him.’

Again, that appears to be the full-throated defence that has been lacking from our mainstream politicians. 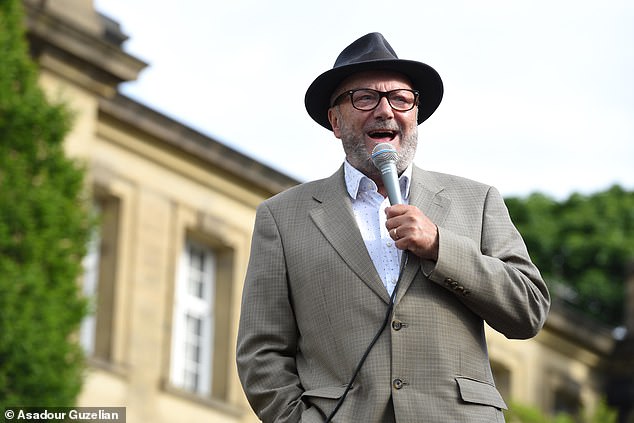 If the two main candidates are running scared of the mob that appeared outside the gates of Batley Grammar, another, George Galloway (pictured), is not

But George Galloway is a master at working the angles. And in Wednesday’s debate, he took a rather different tack.

The image shown to the class was ‘horrific’ and ‘insulting’, he claimed. The school had ‘absolutely no right’ to use the caricature, he said.

But on one point Galloway is correct. The leadership vacuum – or chasm – that has been allowed to develop in Batley has indeed opened the door to those from outside.

I’m now standing in the sunshine in Batley Market Square, as Laurence Fox – replete in his signature sunglasses and crisp, white shirt – addresses a small but appreciative crowd.

The former actor, failed London mayoral candidate and vanquished opponent of lockdown has suddenly found a new cause.

‘I stand with the teacher,’ he tells his audience. ‘We cannot have an education policy driven by intimidation, bullying and death threats.’

Fox’s address is received warmly, rather than rapturously. ‘I don’t really know who he is,’ one onlooker concedes to me. 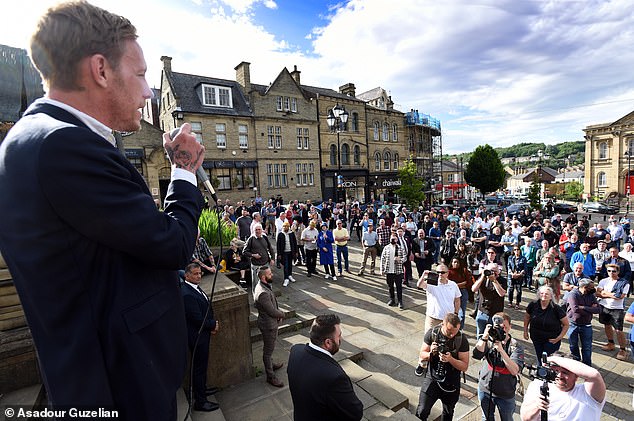 I’m now standing in the sunshine in Batley Market Square, as Laurence Fox (pictured) – replete in his signature sunglasses and crisp, white shirt – addresses a small but appreciative crowd

Just as I prepare to return to London, I take a walk along Market Street in Birstall. It’s here, just outside the library, where Jo Cox was murdered.

In the years that have followed her death, a lot has been said and written. About togetherness. Social cohesion. Turning away from hate.

The words of her maiden speech have been replayed and recounted many times – ‘We are far more united and have far more in common than that which divides us.’

But what does that mean, really? What is actually the point of any of it if, five years on, The Teacher and his family remain in hiding for their lives?

Hiding not in the way our spineless politicians are hiding, but literally in fear of the splintering of a door or shattering of a window that means they are about to be added to the roll of horror that includes the staff of Charlie Hebdo and the French teacher Samuel Paty.

This week a new MP will be elected for this constituency. At which point the parties will decamp, those of us in the media will pack up, and the town of Batley will move on.

Except for one man. A teacher – a good teacher. A neighbour – a good neighbour. Who has been disappeared by his own community. And his own country.