Daughter recreates her late mother's dinner parties from her planner

A daughter is healing her heartbreak following her mother’s death by lovingly recreating five decades of dinner parties from a meticulously handwritten planner she kept for 52 years.

Debbie Money, 58, from East Anglia, discovered that her mother, Patsy Turner, had kept a careful record of every dinner party she held between 1967, when the family lived in the Bahamas, up until she fell ill in 2019.

The party planner has the names of everyone invited and a detailed record of each course, including drinks and cocktails. It is a fascinating record of changing tastes and food fads through the decades as the family moved around the world, eventually settling in East Anglia.

Debbie took to recreating some of the party and ‘cooking through her mother’s life’ after Patsy passed away age 84 in February and shares pictures of the parties on her blog. 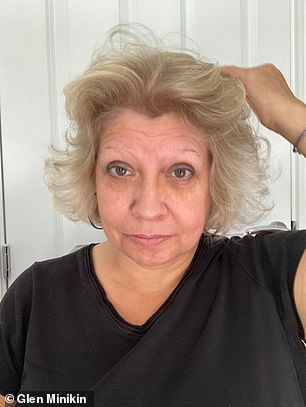 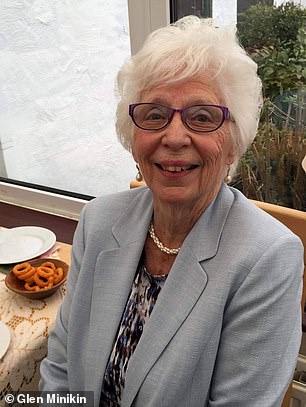 Debbie Money, 58, left, from East Anglia, discovered that her mother, Patsy, right, has been recreating dinner parties she found in her mother’s old planner dating back to 1967 when the family lived in the Bahamas after Patsy died aged 84 in February 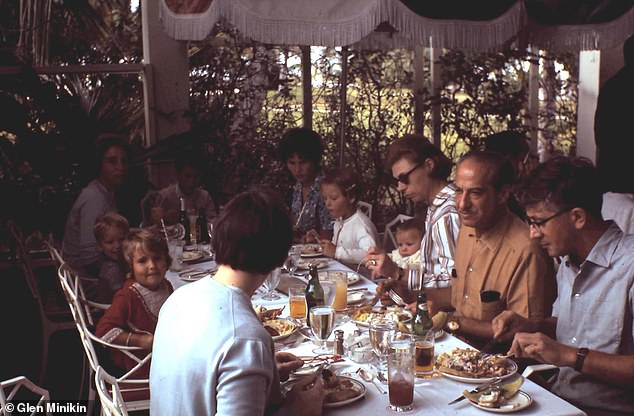 Patsy was a social butterfly in the 1960s when she and her husband Fred moved their family to the Bahamas. Pictured: one of the dinner parties she hosted, circa 1968 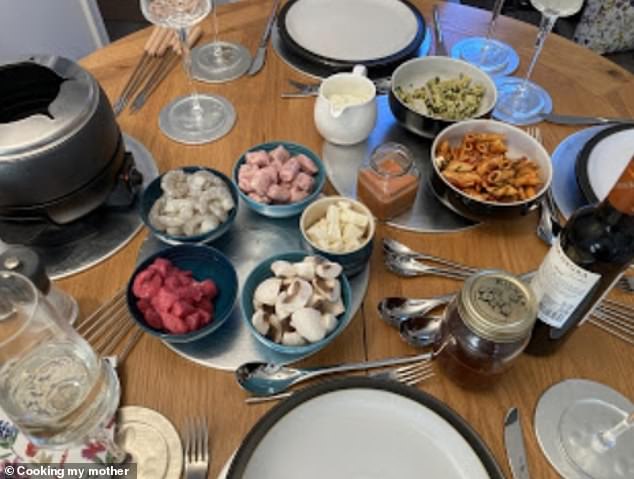 Debbie recreated one of her mother’s dinner parties so far, serving a fondue as the main course, pictured

She said: ‘During the grief and sorrow, of missing mum but looking after dad, and cooking in mum’s kitchen, I realised that the place I most missed mum was in that kitchen.

‘Everywhere I looked was something that she had taught me to use, or a place I would sit or stand while she cooked and I watched or both of us cooked together, or her recipe books and folders of dishes that were part of her repertoire and had become part of mine.

‘So I started to look properly through her books and folders, and pulled out one that I’d been aware of, but hadn’t fully explored: her dinner party planner.

‘She and dad had always had people round to dinner, and been to friends’ houses, but I hadn’t seen the whole picture. 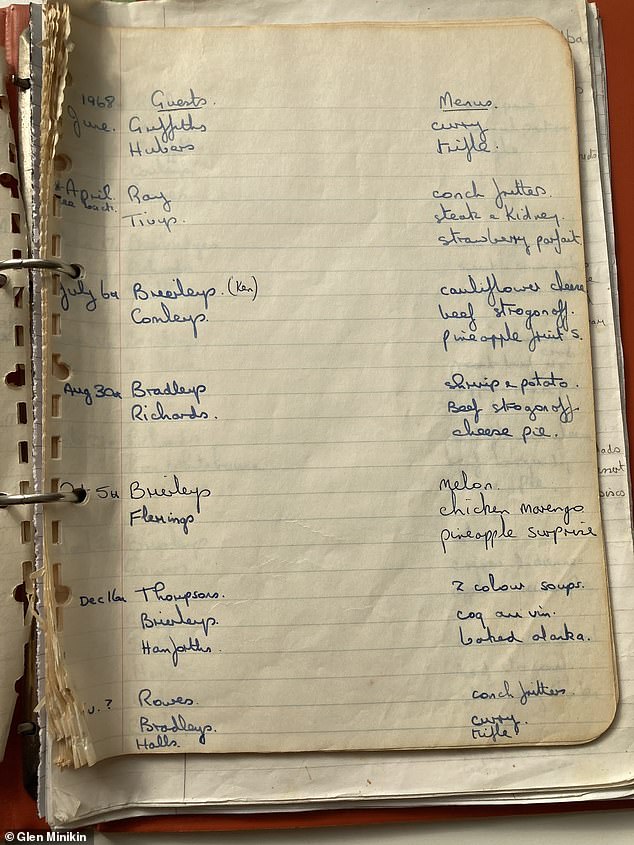 The mother-of-two’s planner, pictured, details the courses, drinks and cocktails served at her parties, as well as the dates and guests she invited 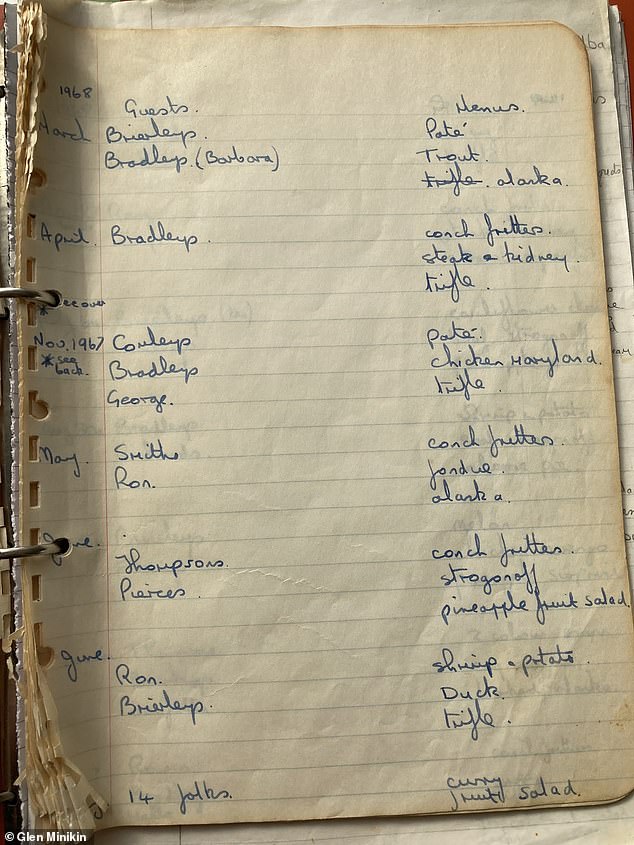 ‘Mum had kept a dinner party planner, not just occasionally but thoroughly, and there in the folder was a record of everyone who had come, and everything she had served them from 1967 to September 2019, when she first fell ill.

‘So, I decided to explore the folder, thinking about mum and dad and their lives, mum’s growing food repertoire and looking at how mum’s food reflected – or didn’t – the changing food of the past five decades.

‘So I decided I was going to cook my way through my mum’s life.’

Debbie has already held her first parties using the exact recipes – as closely as possible – that her mum used. She’s keeping a record of the parties in her blog ‘Cooking my mother…time travelling with food.’

Patsy, a school secretary from Somerset, married husband Fred, now 86, in 1960 after meeting at a Young Conservatives barbecue. Fred, who came from a mining family in Tantobie, County Durham, went on to become a civil engineer, a job that would take him around the world. 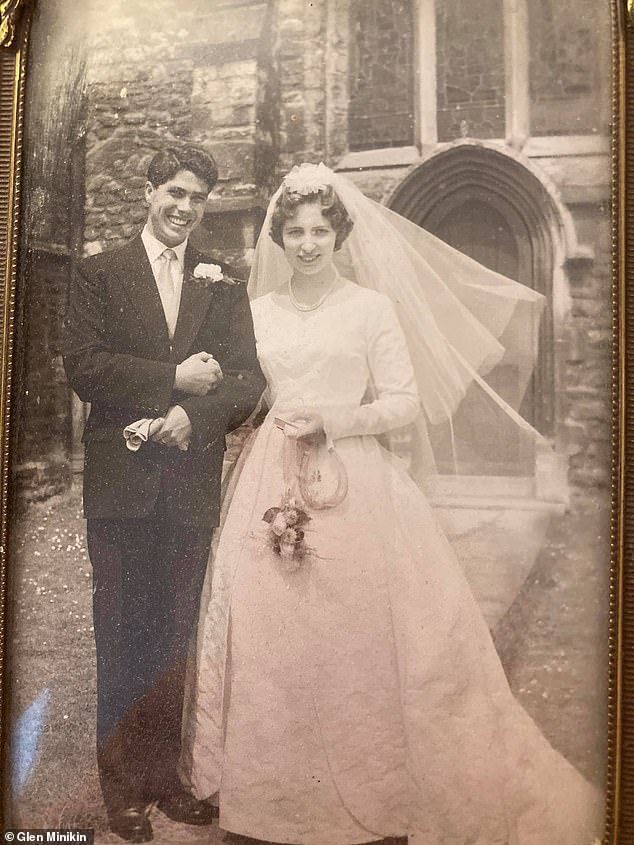 Pictured: Fred and Patsy Turner pictured on their wedding day in 1960. Fred, a civil engineer, soon moved his family to the Bahamas

His first posting with his family was in the Bahamas, but his work also took them to Fiji, Portugal and Hong Kong.

With each new posting Patsy picked up influences that shaped her cooking and meant her dinner parties – which sometimes attracted as many as 20 guests – were eagerly anticipated.

The couple eventually settled in Cambridge, where Fred still lives. Debbie, who took early retirement from her job as a drama teacher, said she and her brother Simon’s earliest memories were of their mum entertaining at home.

She said: ‘Mum was such a lovely, warm, welcoming and vibrant person and the place I remember her best and that holds all the most precious memories of her is the kitchen.

‘She worked hard as a secretary at Sheffield University and at schools following that, but it meant she had time to spend with me and my brother during school holidays and it was a very happy childhood. 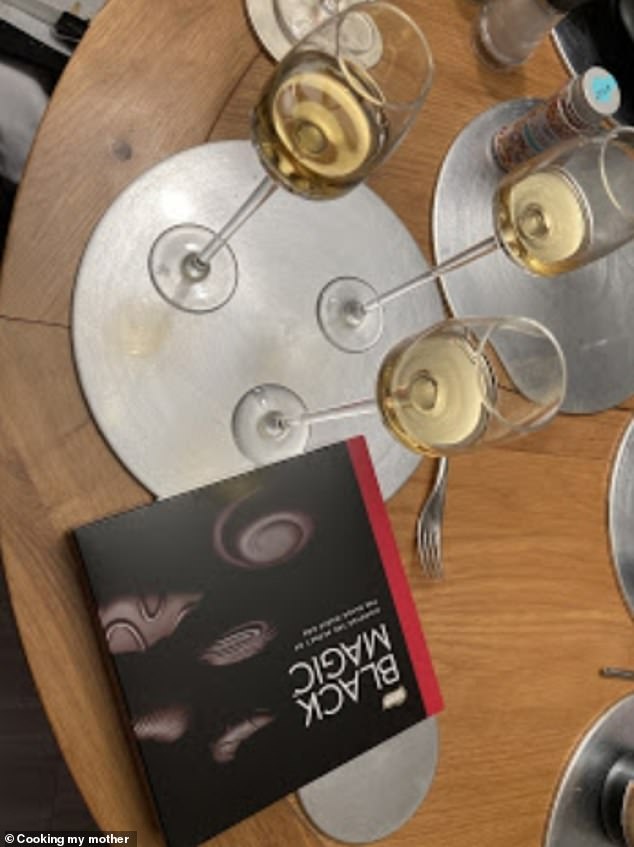 Debbie followed every step of her mother’s planner, including with the choice of drinks and chocolates, pictured 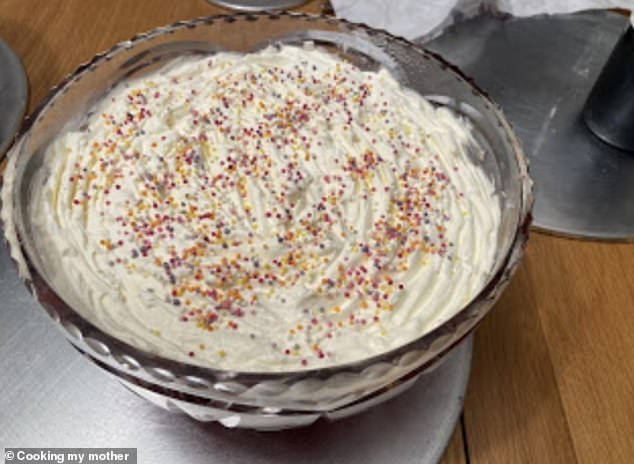 For dessert, Debbie made a trifle following her mother’s recipe for her and her guest, completing missing bits with her memories of her mother’s cooking the dessert in front of her

‘I learnt to cook from my Mum and I love to spend time in her kitchen surrounding by the whisks and utensils she used to create the meals I remember so well.

‘I realise I have created quite a task for myself in recreating all these menus because some of them are pretty ambitious.

‘She and her friends liked to have progressive suppers, which involved having a starter at one host’s home where you were then given an envelope to direct you to them home where you’d have the next course and so on.

‘She also had Bridge suppers where they would play Bridge before dinner was served and then return to the bridge as long as they hadn’t all had too much to drink!

‘I plan to recreate that too because I like to play Bridge and it just sounds like a lot of fun. 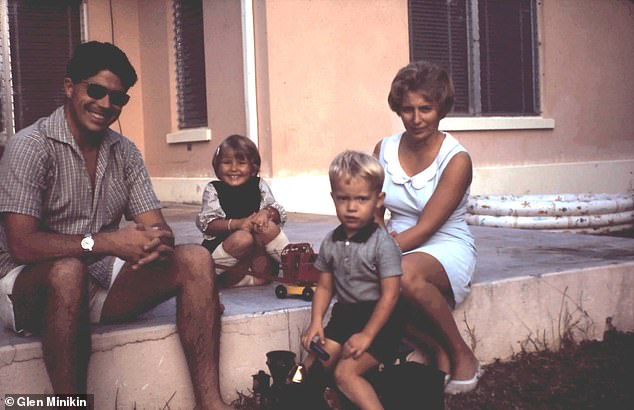 Fred with Debbie and her brother Simon and Patsy, photographed when the family lived in the Bahamas in 1967

‘Reading through the 80 pages of the planner is remarkable because it’s such a journey through not just the history of our family but also the way food tastes changed so dramatically over the years in the British household.

‘Mum’s influences came from everywhere we lived. She did a Chinese cooking course in Hong Kong and brought that to her dinner parties at a time when it really wouldn’t have been common to be served food of that kind.

‘My brother and I would get involved and I remember doing tasks like sorting out the melba toast and folding napkins, but as young children we’d usually be in bed as the guests took their seats.’ 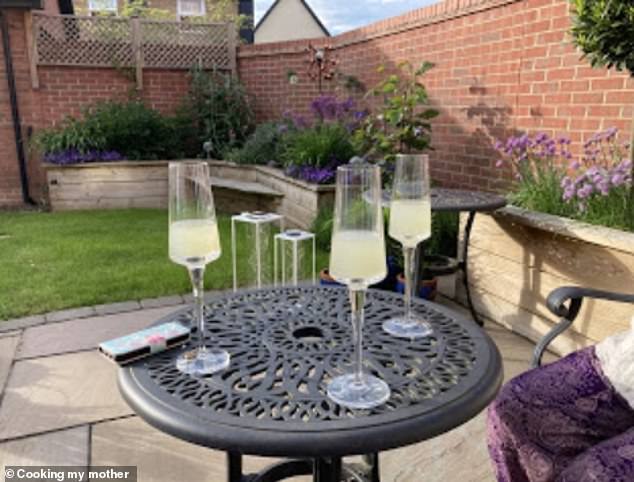 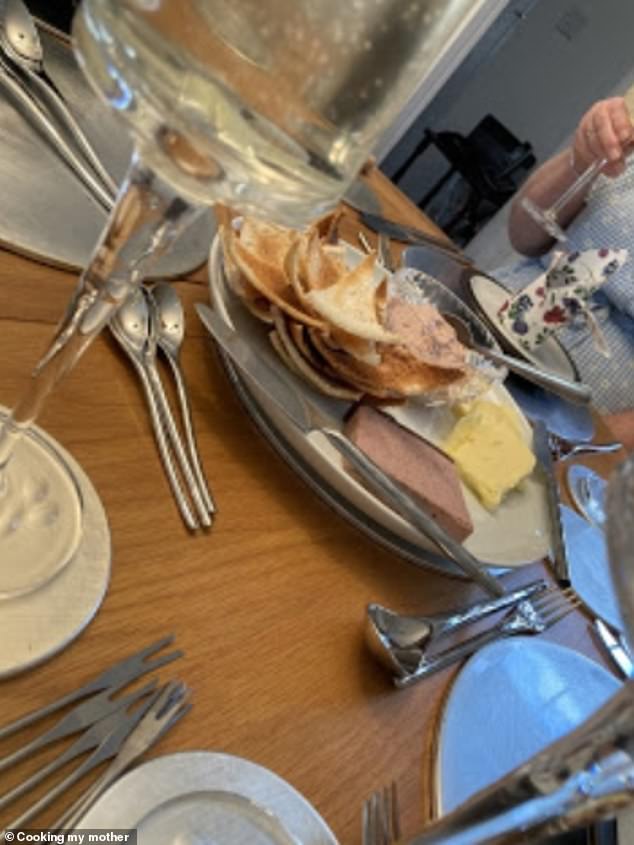 For starters, Debbie served her guests pate and melba toast as her mother did during a 1967 party 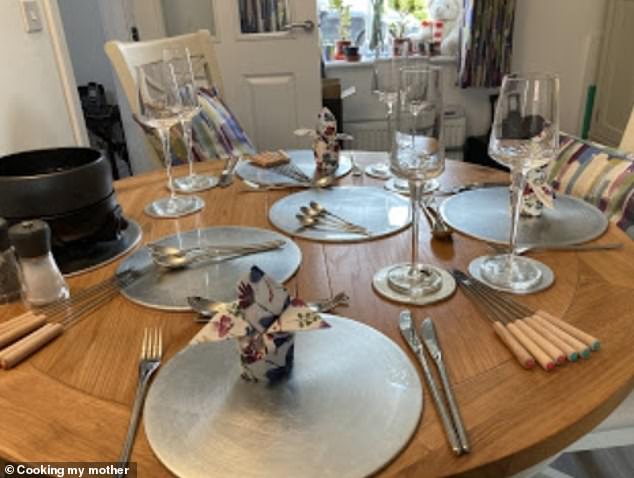 Some of the dishes have proved difficult to replicate – the first being perhaps the most difficult.

Patsy’s recipe was based around conches – sea snails which were readily available in the markets of the Bahamas in the late 60s, but impossible to find in Norwich or Cambridge in 2021.

Debbie said: ‘Covid meant that there were only a limited number of guests at Mum’s funeral so we weren’t able to celebrate her life as well as we’d have wished.

‘This is a way for me to do that and it’s already brought back so many vivid memories of her even though I’m only just at the start of this journey.’