David Pearson, who was hailed as Nascar’s Silver Fox for his cunning behind the wheel that propelled him to three top-series championships and acclaim as perhaps the most brilliant driver in the history of stock-car racing, died Monday. Pearson, who had lived in Spartanburg, S.C., in his retirement years, collecting classic cars, was 83.

His death was announced by Nascar, which did not provide details. It said that Pearson’s family announced in 2014 that he had had a stroke.

In a career spanning 27 seasons, Pearson won 105 races, second only to Richard Petty’s 200 while driving in less than half as many events. He entered the Nascar Hall of Fame in Charlotte, N.C., in 2011 as a member of its second class of inductees.

Petty and Dale Earnhardt each won a record seven Nascar championships, but polling of prominent stock-car figures conducted by Sports Illustrated in 1999 and The Sporting News in 2011 proclaimed Pearson as Nascar’s greatest driver.

But for all his achievements, Pearson was far more comfortable zooming through traffic in his No. 21 car than in seeking a celebrity’s aura. A quiet, even bashful sort, he couldn’t match the likes of the charismatic Petty, Earnhardt and Junior Johnson as fan favorites.

Pearson was prematurely gray, but he became the Silver Fox mainly for his ability to sit back in the pack and then find just the right moment to overtake the leaders. He was so composed that he sometimes kept a cigarette lighter on his dashboard so he could catch a puff or two while driving one-handed on a backstretch.

“He was the craftiest of all the drivers,” Buddy Baker, a longtime rival, told The Sporting News in 2011.

Pearson outdueled Petty, 33 to 30, on the occasions when they finished 1-2.

The Wood brothers were also team owners for Cale Yarborough, Parnelli Jones and A. J. Foyt, among others, but Glen Wood remarked in 1997, long after Pearson’s retirement, how “I tell David all the time he’s the best I’ve ever had.” 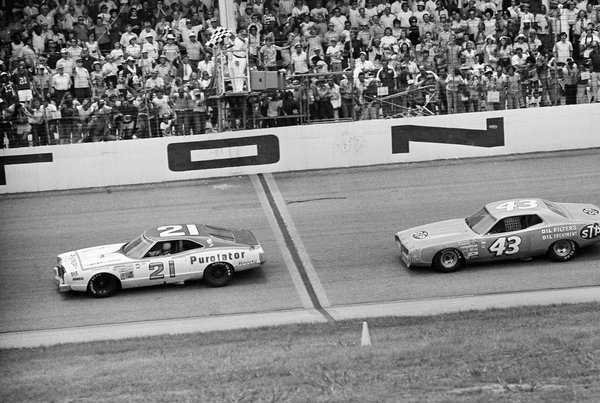 David Gene Pearson was born on Dec. 22, 1934, in Whitney, S.C., near Spartanburg, and once described himself as “just a textile-mill-town boy.” He began racing stock cars on dirt in South Carolina while in his teens, then made his Grand National series debut in 1960, winning rookie of the year honors.

Pearson’s driving skills were notably on display in the 1974 Firestone 400. Petty was in second place, on Pearson’s rear bumper entering the final lap, when Pearson took his foot off the accelerator to get Petty off his draft, the suction in which a lead car pulls the one behind it. That forced Petty to go along the wall and overtake him in order to avoid a rear-end collision.

Some 900 feet from the finish line, Pearson, having achieved his goal of getting the final “slingshot” of the race, came out of a high bank, whipped past Petty and won by 25 feet.

Pearson tangled again with Petty at the 1976 Daytona 500, when they collided near the finish line while well ahead, both cars winding up in the grass infield. Petty could not restart his engine, but Pearson was able to win by driving over the finish line with his crippled car at what he estimated was 15 to 20 miles an hour.

Pearson and the Wood brothers parted ways after an embarrassing incident in the Rebel 500 at Darlington, S.C., in April 1979 when a misunderstanding between Pearson and the crew resulted in his coming out of a pit stop before lug nuts were replaced on his two left tires. The wheels came off, leaving him stranded.

Pearson retired in 1986, having won more than 18 percent of the 574 races he had entered while capturing the pole 113 times.

Pearson and his wife, Helen, had three sons, Eddie, Larry and Ricky. Helen Pearson died in 1991. A complete list of survivors was not immediately available.

Wood Brothers Racing honored Pearson at the 2011 Daytona 500 by painting its No. 21 car, which had also been used by drivers who succeeded him over the years, in his old color scheme of red and white with gold numbers.

Pearson was introduced to the team’s newest driver, 20-year-old Trevor Bayne, who sought his advice on strategy in the race.

“I just told him don’t get out there and try to lead every lap,” Pearson was quoted as saying by The Charlotte Observer. “You’re ruining your motor. Wait to the last part. If you wait that long, about half of them would knock themselves out.”

Bayne stayed in the middle of the pack while a series of wrecks winnowed the field, then took the lead and held off Carl Edwards. He became the youngest winner of the Daytona 500 and gave the Wood ownership its first Daytona victory since the Silver Fox, Bayne’s newly found mentor, outlasted Richard Petty, Nascar’s “King,” 35 winters before.