A super-cunning barrister pulled the wool over the eyes of 11 judges – and polluted our public life for years to come, says DAVID STARKEY

For that is the position the Government and the country now find themselves in. What happened in those 13 momentous days? Did Parliament pass a new Act which changed the law? Was an important, but forgotten precedent, rediscovered?

Neither, I fear. Instead – as happens in many of the best courtroom dramas – a cunning, super-clever barrister pulled the wool over the eyes of a panel of judges. 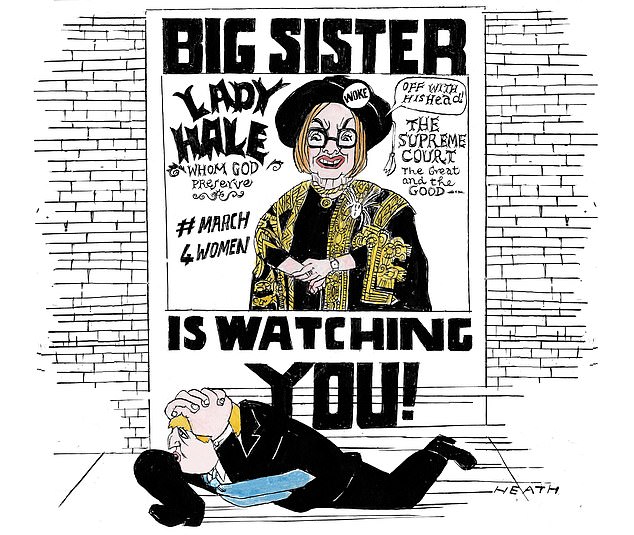 Lady Hale, the President of the Court, wore a large spider brooch when she read its shattering judgment last week. But in this critical case, the Baroness and her fellow judges were the fly caught in the web woven by the aptly named Lord Pannick 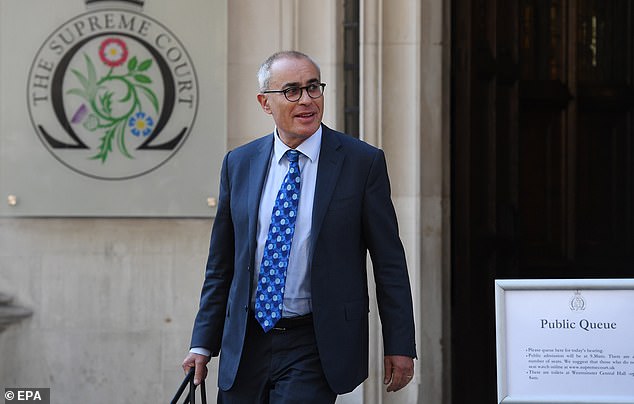 The barrister in question was Lord Pannick QC, representing those who opposed the Government’s wish to prorogue Parliament. And the judges? Well, they were the 11 men and women of the Supreme Court, the highest legal authority in the land.

Lady Hale, the President of the Court, wore a large spider brooch when she read its shattering judgment last week. But in this critical case, the Baroness and her fellow judges were the fly caught in the web woven by the aptly named Lord Pannick.

The conclusion – that the Prime Minister had behaved unlawfully in securing a suspension of Parliament – was shockingly inept. It’s all the more shocking since Lord Pannick’s false reasoning had already been rejected by three judges of the High Court in their September 11 ruling.

So how did the Supreme Court get it so wrong? In short, false precedents. 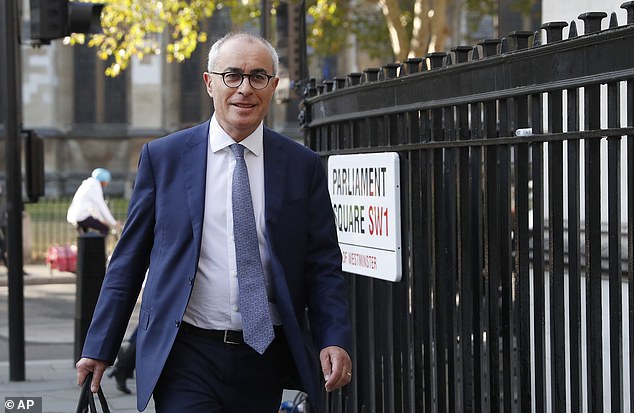 When he presented his case in the High Court, Lord Pannick began with the impressive-sounding case of 1611 in which Lord Justice Coke pronounced: ‘The King hath no prerogative but that which the law of the land allows him’

When he presented his case in the High Court, Lord Pannick began with the impressive-sounding case of 1611 in which Lord Justice Coke pronounced: ‘The King hath no prerogative but that which the law of the land allows him.’

It’s the same precedent that Lady Hale used to headline her broadcast summary of the Supreme Court’s judgment. To give it added authority, like a dodgy antique dealer, Lady Hale ‘aged’ Coke’s dictum by quoting it in its original eccentric 17th Century language.

But there is nothing relevant about Lord Justice Coke’s precedent.

The judgment was not about the authority of the Government to control the key levers of politics: the power to summon, prorogue and dismiss Parliaments; to declare war and peace; and to make treaties.

Rather, it was about an attempt by King James I – who in the early 17th century was the Government – to use the prerogative to impose criminal penalties on ordinary citizens who broke his London building code. 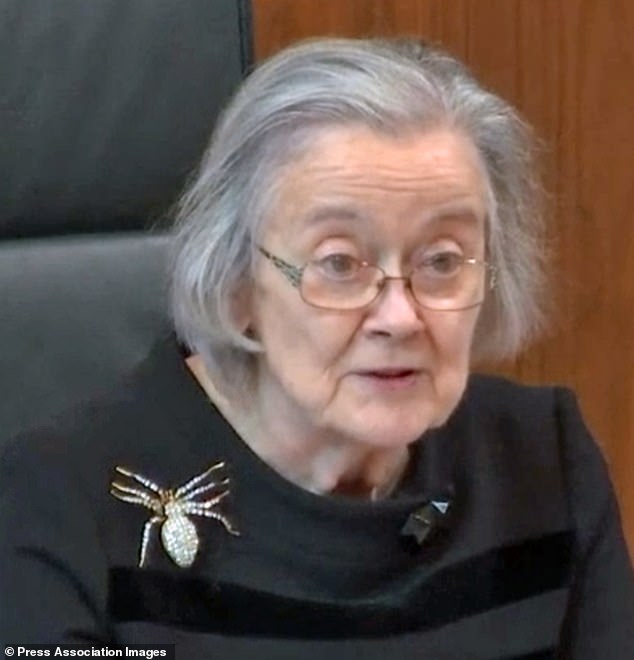 It’s the same precedent that Lady Hale used to headline her broadcast summary of the Supreme Court’s judgment. To give it added authority, like a dodgy antique dealer, Lady Hale ‘aged’ Coke’s dictum by quoting it in its original eccentric 17th Century language

What is more is that all the other precedents cited by Lord Pannick were also about ‘the impact of the exercise of the prerogative on particular individuals’. In other words, they were irrelevant to the case. That is why the High Court – following three centuries of real precedents – correctly ruled the case was outside its remit.

But this was not the only novel and fanciful misreading of the law that Lord Pannick offered the Supreme Court. Parliamentary sovereignty has always been understood to mean that the ultimate authority is ‘the Queen in Parliament’. It’s a trinity of the Queen (which nowadays in practice means the Government), the Lords and the Commons.

There are a series of checks and balances, but by and large the Government, providing it has a majority, runs the show.

This was not good enough for Lord Pannick. He substituted it for a brutal new doctrine: the Commons is political as well as legal sovereign, and their prime duty, apart from legislating, is ‘to hold the Government to account’.

Lord Pannick argued that because the prorogation interfered with this alleged duty, the Supreme Court must rule it unlawful. Why was this utterly wrong? Because it stands our system of government on its head. For the past 150 years, we have had a Commons run by a Government formed from the largest party in the House. This is why our unique parliamentary form of governance has worked so well.

Yet for the past quarter of a century there has been a liberal campaign to destroy this by giving judges the power to constrain the Government’s authority. The Blair administration created the European-style Supreme Court – which has shown it is only too willing to exploit its sweeping new powers. And today the great wrecking project is almost complete.

At the combined bidding of Speaker John Bercow and the judges, we shall have a Government – almost certainly a minority one – answerable to the Commons for everything it does and with the Supreme Court waiting in the wings to slap a judgment on it if it steps out of line.

It is, as the past two and a half years have shown, a recipe for stalemate. As the Attorney General Geoffrey Cox put it – we have a ‘dead Parliament’.

So where do we go from here?

The most likely future, I fear, is that we remain in the present mess and, indeed, that it gets worse.

The next General Election is unlikely to give any party an overall majority.

The future feels particularly bleak if we were to end up with a Labour coalition government.

But let us suppose that a bullish Boris wins his People versus the Establishment Election and emerges with a clear majority – what then? He will have two choices.

The first is to restore the system that we had. He could start by repealing all the constitutional changes made by New Labour: the Supreme Court, the demotion of the office of Lord Chancellor and the Human Rights Act. He should also repeal the Fixed-term Parliaments Act and introduce statutory limits on judicial review, which would stop judges holding sway over Government decisions. 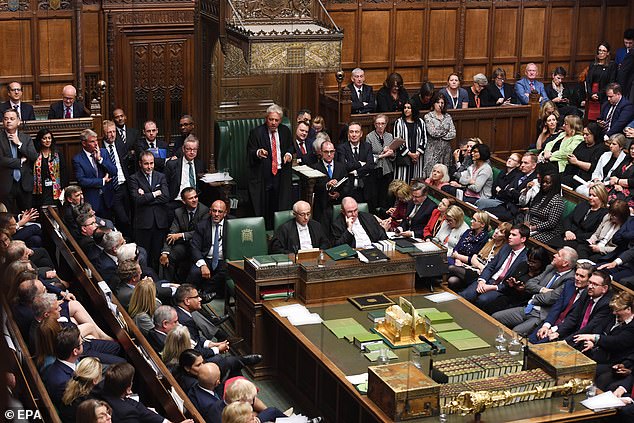 Finally, the new House of Commons should pass a resolution declaring that none of Bercow’s rulings shall constitute precedent – and that the old rules of Erskine May be re-imposed.

The second, more realistic choice would be to accept much of what has happened: that we have a Supreme Court determined to thrust itself into the political sphere – and we have a Commons which wants to be independent.

How do we make it work?

The answer is to look to America, where they have all those things.

We have been heading in this direction for some time. The exposure of the Queen’s role in our democracy as all-but useless has made the situation clear. All we need to complete the evolution of our constitution into America Mark II is to make the office of Prime Minister subject to direct popular election – just like the US president.

It is a hard choice, not least because we would be obliged to acknowledge a profound rupture with our own history. The political ‘magic’ of the Monarchy and its relationship with Government would be no more. The Executive would take its authority, instead, nakedly from the voters.

Difficult or not, I suspect this is where we now are.

Mention of America brings us to a final, humiliating comparison.

In the late 18th Century, the liberated American colonies perfected their constitution in one of the great achievements of human intelligence. The Constitutional Convention sat and debated for about four months; contained some of the finest political brains of all time and considered political theory and practice, what had worked and what hadn’t, from a wide range of examples across time and space.

The result is a constitution that has endured for two-and-a-half centuries, and survived the Civil War, President Trump and anything else that could be thrown at it with ease. And us? We have just spent two-and-a-half years trashing our own even older, even better functioning constitution.

And how? By the backstairs intrigue of renegade politicians, aided and abetted by an out-of-control Speaker and a reckless Supreme Court seduced by legal sophistry.

And, above all, by the donors who supported Gina Miller, the businesswoman who brought the case.

Clause 40 of Magna Carta promises that justice will not be denied or delayed or sold. We have just seen something much worse: our very constitution and political traditions bought and sold to the highest bidder.

It is a shameful story and the consequences will pollute our public life for years, and perhaps generations, to come.