Couple spark a VERY heated debate over the correct way to pronounce ‘cappuccino’ – so how do you say it?

A couple has sparked heated debate over the correct pronunciation of ‘cappuccino’, the iconic Italian coffee made from espresso and frothed milk.

The discussion began after Australian comedian ‘Hi Josh’ and his partner Catherine posted a video of themselves playfully arguing over how to say the word on Facebook.

Josh declares Catherine, who comes from Adelaide in South Australia, has ‘lost her mind’ because she insists it is pronounced ‘cup-puccino’.

And their debate, which has racked up almost 150 comments since it was uploaded late on Wednesday night, has divided the nation. 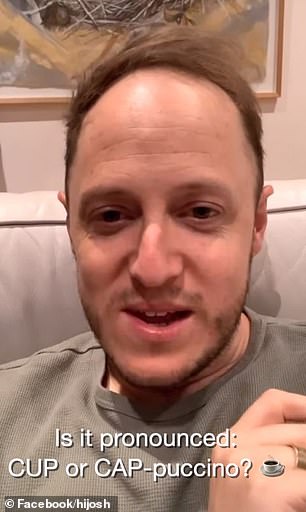 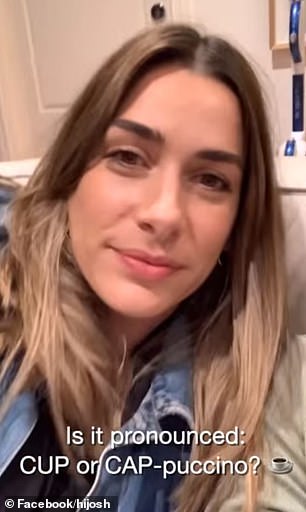 How do you pronounce the iconic Italian coffee?

How do you pronounce the iconic Italian coffee?

‘It’s Italian, it sounds like cup. Most people are saying cap, but I promise cup is correct,’ one American viewer replied.

‘I say cap. Someone I used to work with called it a ‘cup of chinee’ – it drove me insane,’ added another.

‘Cap for sure. Never heard of it being a cup,’ said a third.

A fourth shared a fond memory of her grandmother: ‘My nan used to make them for me in the 80s at home and said cup. I still say that – mind you she called a latte a ‘caffeolae’.’

A Sydney barista trained in the art of coffee making said it is ‘definitely cap’.

But others felt it all comes down to accent.

A second agreed, writing: ‘I could imagine Italians pronouncing it ‘cuppacino’ but an Aussie accent should definitely pronounce it ‘cap’.’

Meanwhile a third offered a practical solution to the problem: ‘Just order a flat white with foam.’