BRISTOL, Fla. — When Hurricane Michael hit the Florida Panhandle, people living in the town of Bristol outside Tallahassee hunkered down in a shelter. Now, they’re returning to their homes to survey the damage.

Deirdre Hawthorne and her family rode out the storm with 200 other people. On her way home, she said she was filled with “dread.” She has called Bristol home for the last 18 years, and her county took a direct hit from the storm.

CBS News was with her when she saw her house for the first time. Somehow it was still standing beneath a twisted knot of fallen trees. Her daughter Amanda had to find another way into the house. 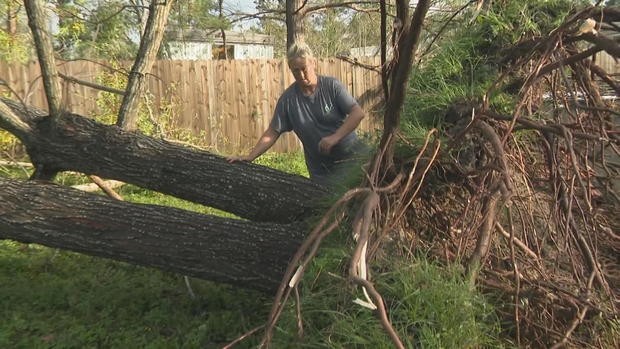 A tree happened to fall the other way, narrowly missing their home. But not everyone was so lucky.

“It was very depressing,” Chambers said. “My heart was sinking in the stomach … Yeah, I started crying.”

The storm devastated Chambers’ entire street and sent a tree straight through her daughter’s bedroom.

“Materialistic things can be replaced,” Chambers said. “As long as I have her, this is everything that matters to me in world.”

The entire county has no power, and the local electric company said they have ordered 300 utility poles to repair downed power lines. But they said they have no idea when the electricity will be restored.