Recently the air conditioning in my car went kaput.

After two days of driving around in a hot-wind machine on wheels, I declared to anyone who would listen that my car was now completely useless. I may as well abandon it by the side of the road, I shouted, waving my arms around like George Costanza. 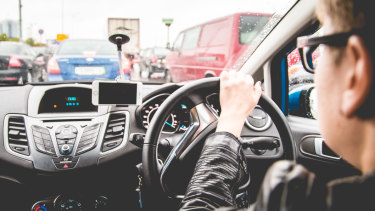 After two days of driving around in a hot-wind machine on wheels, I declared to anyone who would listen that my car was now completely useless.Credit:Shutterstock

“A car without air-conditioning is about as useful as a car without wheels!” I declared portentously.

The situation seemed totally untenable. I purposely delayed any long car trips until I could afford to get it fixed. When I did drive it around the city, I huffed and puffed and couldn’t countenance the agony I was having to endure.

How did I get to this level of intolerance for something that is really just a physical discomfort? I remember my first car had no air-con, no electric windows and a passenger side door that routinely would not open from the outside, leaving the passenger to climb inside via the driver’s side door.

Modern life has delivered to us so many comfort cushions that we have forgotten how to live simply.

I drove that car around for years. As well as the unreliable passenger door, its air conditioning was the old style, "fan" feature; where the heater just blew air that wasn’t necessarily cold, but wasn’t necessarily heated either. I don’t recall any of these things vexing me as much as my recent air-con dilemma.

You could blame climate change, the hotter days, but are we also going soft? Do we expect too much comfort from modern life?

In the same week I saw an article about mortgage stress. A young couple was quoted as lamenting how much harder their life would be now that banks were tightening their belts on lending. Among the hardships they listed were:

Their kids having to wear family hand-me downs

Cutting back on takeaway dinners

Having to get by with one car

While I understand that these things may be inconvenient, are they really what we in the First World are listing as ‘hardships’ these days?

Modern life has delivered to us so many comfort cushions that we have forgotten how to live simply. Credit cards, cars with full-service air con and Bluetooth connectivity, fast fashion, two-car families, Uber Eats at our finger tips. All these things have possibly caused us to lose sight of what is and isn’t essential for a happy life.

On the home front, we are expanding exponentially into our individual dwellings. Kitchens must be ‘stone-topped’ and large enough to film a cooking show in, family areas must be immense, able to house a ballroom dancing competition. Televisions must cover entire living room walls (unless they are being housed in their own separate "media room"). Two bathrooms is the bare minimum most people will tolerate and master ensuites are de rigueur. Oh and a garage (a house for your car) is also considered essential for a comfortable life.

I’ve also noticed more and more families going on months long overseas cultural odysseys, taking in large swathes of Europe, the US or South East Asia with their children in tow. Long, expensive and substantial travel plans that way-back-when, would have been considered an inconceivable luxury.

For most Gen X-ers a family holiday was a drive up the coast in the family car to a rented holiday house with mismatching crockery, no dishwasher and a bunk room for the kids out back in a converted garage. Air-conditioning? Up with the roller door.

As for the hand-me-downs, my first child made do almost entirely with hand-me downs from a friend of a friend. She arrived with a suitcase full of her own children’s clothes and I gleefully picked over it, filling garbage bags with my hand-me-down booty. In fact, I couldn’t get enough of hand-me-downs of all description: toys and books were also the bomb.

I’ve found recently when I’ve tried to foist hand-me-downs on young families they turn their noses up at the idea. They want to curate their child’s life from top to bottom with newly minted stuff. Hand-me-downs go straight to Vinnies.

Even the concept of "takeaway" which was previously Mum or Dad dashing out in their Ugg boots to bring the food back home in leaky plastic containers, has been made even more convenient for modern living: Uber Eats, Menulog and Deliveroo all ferry it directly to your door. The only thing you have to lever yourself off the couch for is to answer the door.

For most Gen X-ers a family holiday was a to a coastal, rented holiday house with mismatching crockery, no dishwasher and a bunk room.

I once caught a whiff of Indian food in my house and followed the trail to my son’s bedroom where I found him sheepishly wolfing down an Uber Eats order before rushing off to work.

“There’s food in the fridge!” I cried.

“This is just easier," was his Gen Z reply.

Then there’s the endless bottled water. A drink on the go used to be water from a tap wherever you could find it, two hands to catch it, quickly scooped into your mouth.

So how to live more simply? Start with expectations. I looked around my own modest California Bungalow recently and found it to be lacking that classic modern open plan living space. An architect friend came around and presented me with two options:

OPTION A: An expensive "do it once and do it well" renovation that would garner the ultimate ballroom dancing living space with adjoining gourmet kitchen: soaring ceilings and clerestories, foldaway doors with a flow to the garden, all that real estate gold jazz.

How happy and comfortable do I need to be?

OPTION B: A quickie budget version, where we knocked out a few walls and created a ‘good enough’ new space; reuse the unfashionable aluminium sliding glass doors and simply open the dining room to the existing kitchen

With the money saved, I got the air conditioning fixed in my car. There’s only so much discomfort a modern girl can endure.