DOMINIC SANDBROOK: Boris Johnson is wrong to make a jibe at Margaret Thatcher. Her spirit is bringing out the best in us

From his Downing Street flat, where he is cooped up in isolation, he croaked: ‘One thing I think the coronavirus crisis has already proved is that there really is such a thing as Society.’

Classic Boris, you might say. Cheerful, rousing stuff, even when he’s laid up with the coronavirus. And it was classic Boris, though not necessarily for the right reasons.

For as anyone familiar with British political history knows, that line about ‘such a thing as Society’ carries an electric charge.

It is a deliberate rebuke to the late Margaret Thatcher’s controversial remarks, made in an interview in the late Eighties, when she said there was ‘no such thing as Society’. 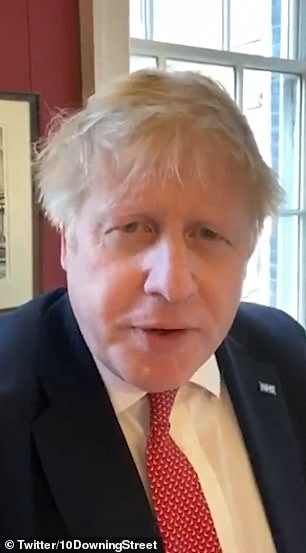 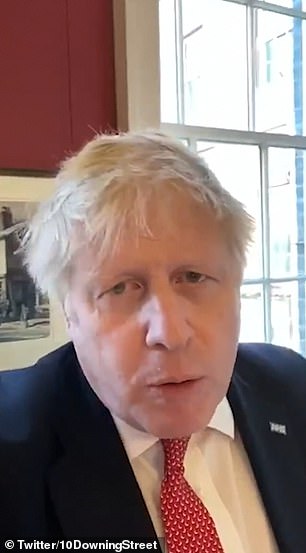 Ever since, that phrase has hobbled Mrs Thatcher’s reputation. On the Left, it has become a kind of shorthand for what her critics see as her uncaring individualism.

As one columnist remarked on the 30th anniversary of her first election victory, the phrase ‘sounds frighteningly atomistic and strident, and does not seem to reflect the duty we all owe to each other’.

That columnist was Boris Johnson. So for once, he has been perfectly consistent.

But he was wrong then, and he is wrong now. For Mrs Thatcher’s famous phrase is not just one of the most widely quoted things a British Prime Minister has ever said; it is one of the most grotesquely misunderstood.

I’ll come back to Mr Johnson. First, a bit of history.

Mrs Thatcher gave that interview on September 23, 1987, not long after winning her record-breaking third term.

Like today’s blond Tory bombshell, she was a ruthless populist, with an unparalleled ability to reach ambitious working-class voters.

Unlike Mr Johnson, she had an intensely earnest, almost Victorian sense of public duty and social responsibility. And like so many of us, she firmly believed people should try to stand on their own two feet.

But as she saw it, ‘there is no such thing as Society. There is [a] living tapestry of . . . people and the beauty of that tapestry and the quality of our lives will depend upon how much each of us is prepared to take responsibility for ourselves and . . . to turn round and help by our own efforts those who are unfortunate.’

As her old ally Norman Tebbit remarks in today’s Mail, Mrs Thatcher was clearly saying: ‘Society doesn’t exist on its own: it is made up of people.’

So instead of expecting some vague, abstract entity called Society to sort things out, we should do it ourselves — by looking after ourselves as well as the needy and vulnerable.

That doesn’t sound ‘atomised and strident’ to me. Quite the reverse: it sounds like precisely the kind of can-do, philanthropic public-spiritedness we need right now — and indeed are seeing! 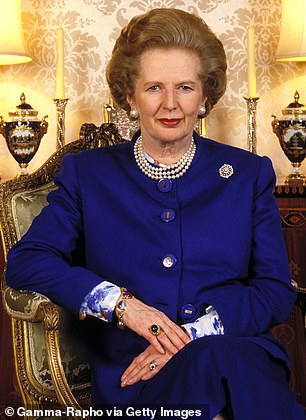 That line about ‘such a thing as Society’ carries an electric charge. It is a deliberate rebuke to the late Margaret Thatcher’s controversial remarks, made in an interview in the late Eighties, when she said there was ‘no such thing as Society’, writes DOMINIC SANDBROOK

All those thousands of citizens dropping off food for their elderly neighbours; shop managers putting aside supplies for NHS workers; and all those sending flowers to care homes are doing precisely what Mrs Thatcher talked about.

So, too, are the 20,000 retired doctors and nurses who have answered Mr Johnson’s call to arms, as well as the 750,000 people who have applied to be NHS Volunteers.

Instead of leaving it to some abstract ‘Society’ — which means the State — they are getting stuck in themselves.

This volunteer ethos has always been at the heart of Conservatism. The 18th-century philosopher Edmund Burke wrote of the ‘little platoons’ at the heart of English life, just as the Victorian statesman Benjamin Disraeli sought to bring people together in ‘one nation’. Even David Cameron’s much-maligned ‘Big Society’ was simply the latest version of this old idea.

But when you look at the historical record, no one talked about doing the right thing and looking out for your neighbour with greater enthusiasm than Margaret Thatcher. That may not fit the lazy, Left-wing caricature, but it’s the truth, reflecting her religious upbringing as the daughter of a Methodist lay preacher.

So why did Mr Johnson seemingly cast her as the apostle of selfish individualism, distancing himself from her legacy?

Well, there are a couple of possible explanations, both of which tell you something about our Prime Minister.

One is that, in classic Johnsonian fashion, he has never bothered to dig beneath the surface. He tossed off the reference without thinking about it, because he has better things to worry about. 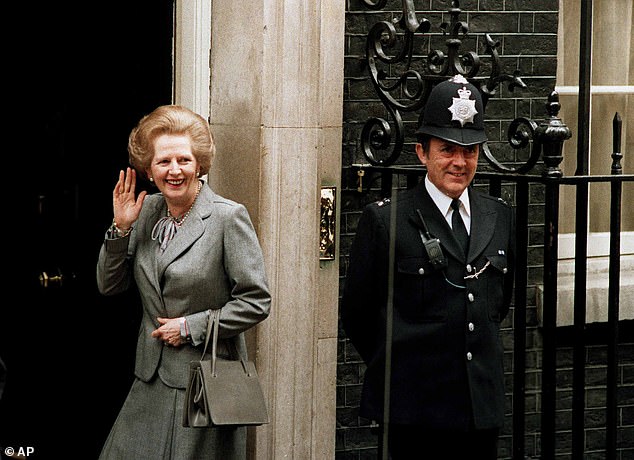 Mrs Thatcher gave that interview on September 23, 1987, not long after winning her record-breaking third term. Pictured: Mrs Thatcher in 1987

That doesn’t seem entirely convincing to me. The lesson of the past few years is that everything Mr Johnson says and does is more carefully calculated than his critics think.

Even his apparently off-hand remarks often carry a deep-set political charge. So I suspect he knew what he was doing.

The other explanation is very simple, and I think more telling. It is that Mr Johnson has never been one of life’s Thatcherites, and that his political identity is based on setting himself apart from more conventional Conservatives.

Mrs Thatcher was a serious, spiky character who abhorred wasting money and was never happier then when dishing out hard truths. She had no problem being unpopular; indeed, when people criticised her, it merely confirmed her belief that she was right.

Mr Johnson is utterly different. He avoids earnestness at all costs, loves playing to the gallery and hates to deliver bad news. (In a revealing aside, he once called David Cameron a ‘girly swot’ — two words that summed up Mrs Thatcher.)

So when, in the last election, the Labour Party tried to paint Mr Johnson as Thatcher redux, they were wrong. His real model is the man who brought her down, her former Defence Secretary Michael Heseltine. 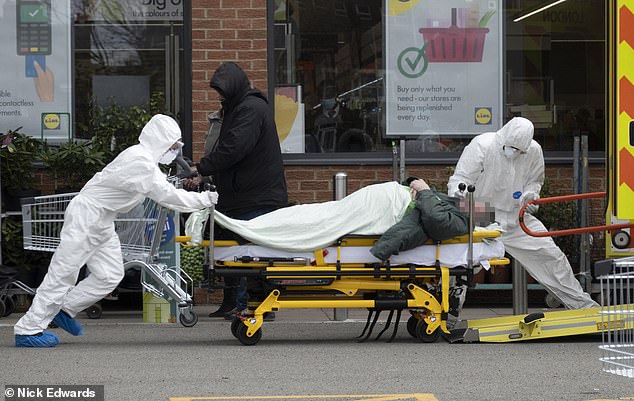 Of course, we now find ourselves in a situation far graver than anything Mrs Thatcher or Lord Heseltine had to confront in the Eighties, writes DOMINIC SANDBROOK. Pictured: Paramedics in hazmat suits take away a man that collapsed in a Lidl in south east London

As Mr Johnson told his Cabinet last year, he dreams of being a ‘Brexity Hezza’. And you can see why. For what Mr Johnson and Lord Heseltine have in common is not just a shock of blond hair and a charismatic public appeal.

They also share an enthusiasm for active government, grandiose gestures and expensive public projects — all of which were anathema to the parsimonious, tax-cutting grammar school girl.

Of course, we now find ourselves in a situation far graver than anything Mrs Thatcher or Lord Heseltine had to confront in the Eighties. And Mr Johnson is right that a strict, small-state, budget-cutting line would be entirely wrong in the current crisis — just as it would have been wrong during World War II.

But to come through this ordeal, we need more than big government. We also need to feel enlisted as individuals in a national crusade — which is where Mrs Thatcher comes in.

For if Mr Johnson is looking for a Conservative predecessor who preached the virtues of voluntarism, stoicism, selflessness and courage, who urged people to look out for their neighbours, and who believed that with great wealth comes great responsibility, the Iron Lady is the obvious choice.

At the heart of her political philosophy, Mrs Thatcher once said, was the belief that you ought ‘always to give a hand to your neighbour’ and ‘be a good member of your community’.

Charity, she said, was the ‘supreme moral quality’. And what mattered most was a spirit of ‘genuine caring for one another on the part of families, friends and neighbours’.

As you look around Britain now, at countless tear-jerking scenes of kindness, those words ring loud and clear.

And in that sense, we are all Thatcherites now — whatever Mr Johnson may think.