From amorous couples beneath the mistletoe to women dreaming of a night of passion, these vintage Christmas cards depict decidedly raunchy festive scenes.

The cards, designed by Donald McGill between the 1900s and 1960s, are on display at a museum celebrating his work in Ryde, on the Isle of Wight.

While some are a light-hearted take on bawdy festive happenings – others depict sexist scenes that would not be found on shop shelves today. 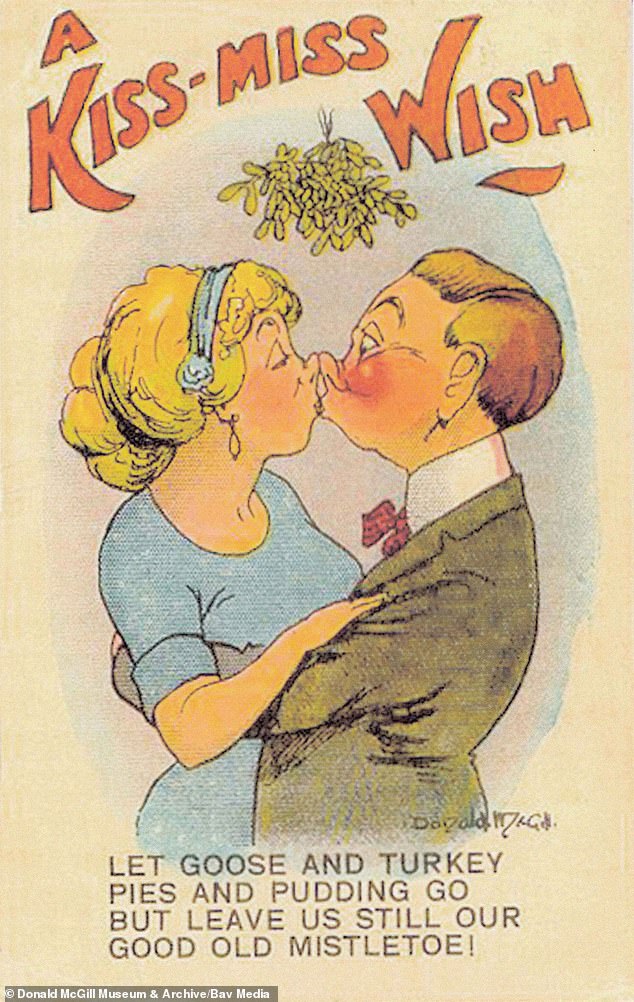 Merry kiss-mass: A couple embrace beneath the mistletoe on this card by Donald McGill 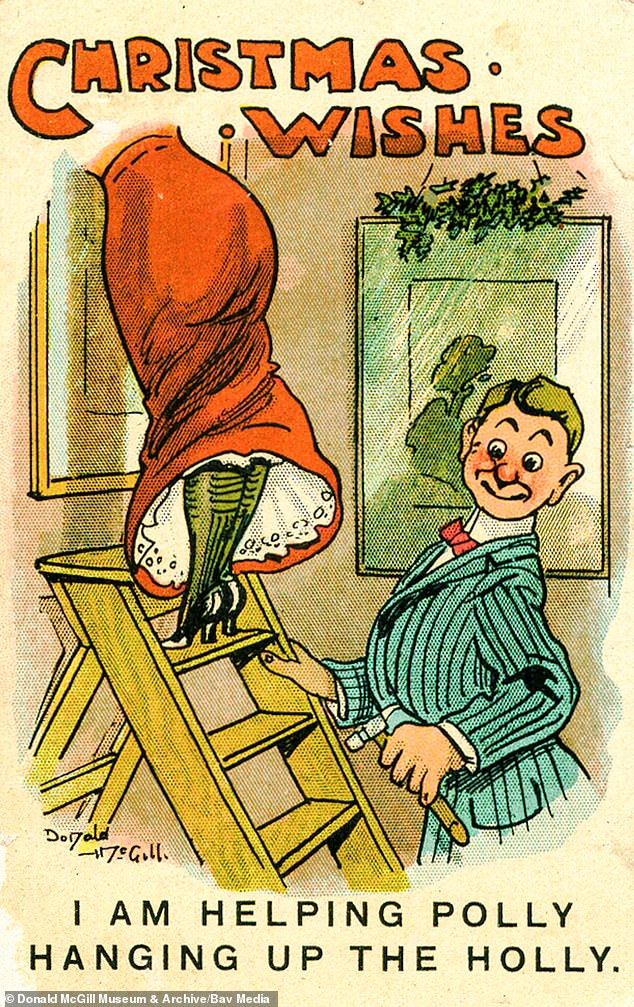 Outdated: Some of the cards, including this one, would not be found on shop floors today 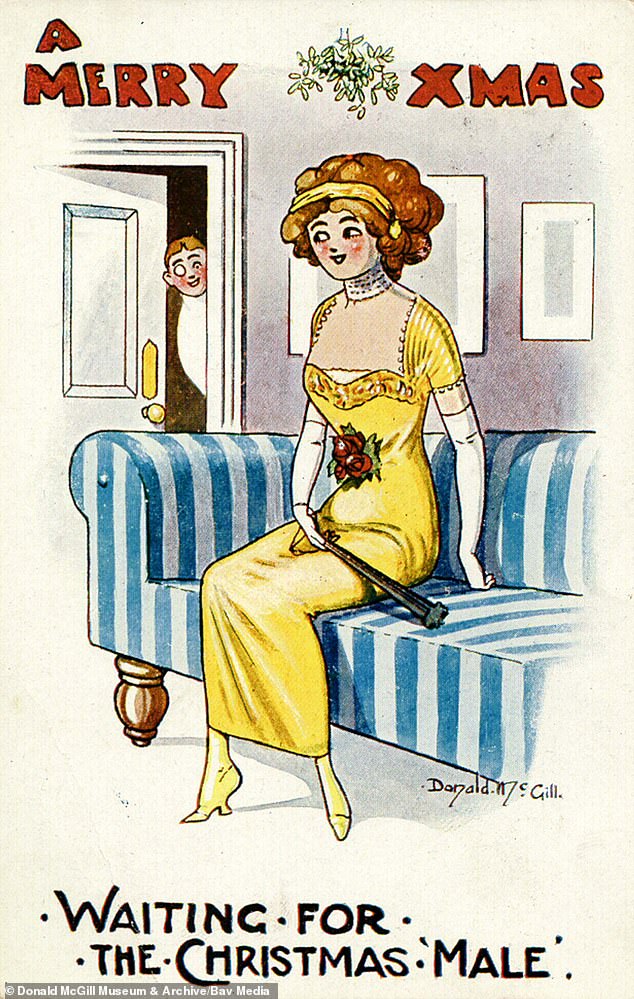 Waiting for the ‘male’: This card is an example of McGill’s love of the double entendre

One card shows a woman balancing on a ladder to hang holly and a man looking up her skirt, with the caption: ‘I am helping Polly hanging up the holly.’

One drawing depicts a woman with big breasts waiting for the Christmas ‘male’ and another shows a woman cornering a man under the mistletoe, with the caption: ‘If you must be cornered this Christmas – let a nice one do it!’

McGill is best known for his cheeky seaside postcards but drew at least four different Christmas designs every year from 1904 onwards, with many full of bawdy humour, innuendo and terrible puns. 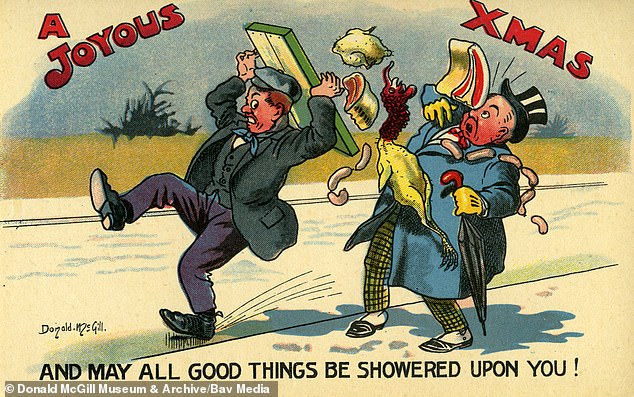 Festive feast! A falling Christmas dinner with the trimmings catches a gentleman off guard 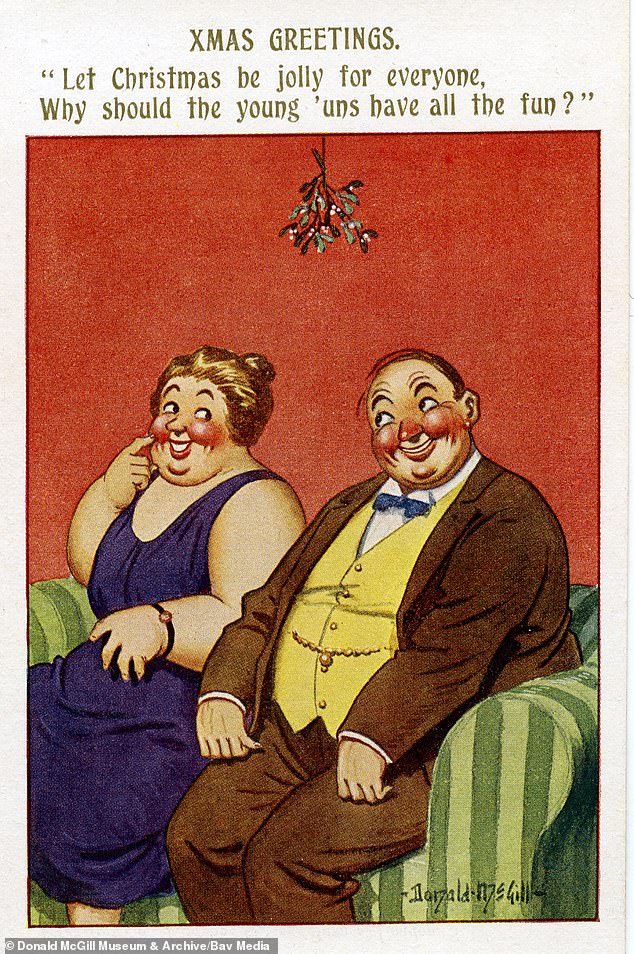 Keeping the spark alive: Christmas reignites the passion for one couple later in life 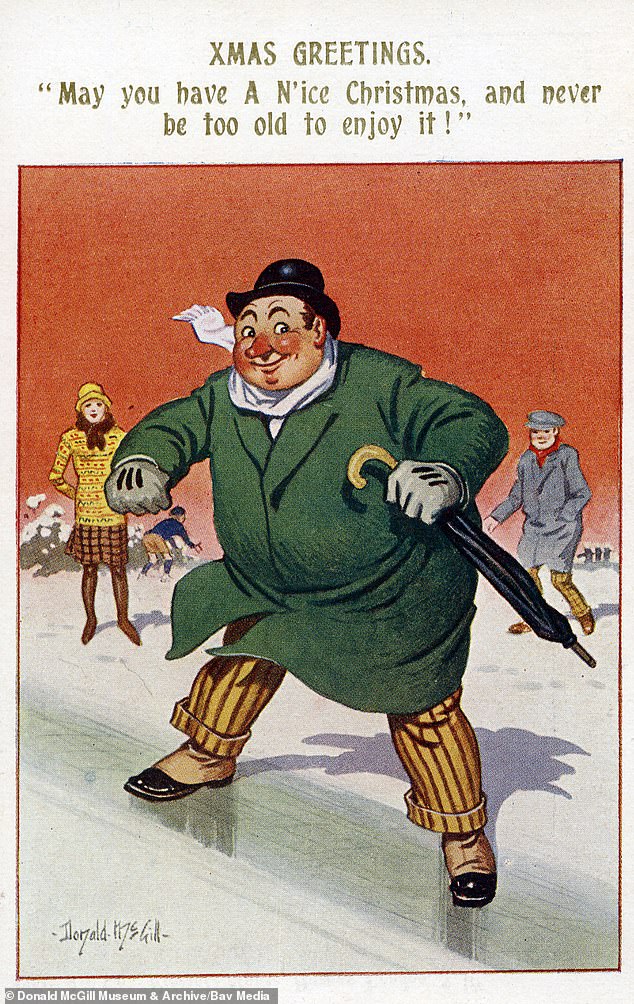 Kid at heart: This portly gentleman takes a spin on the ice rink – proving age is just a number 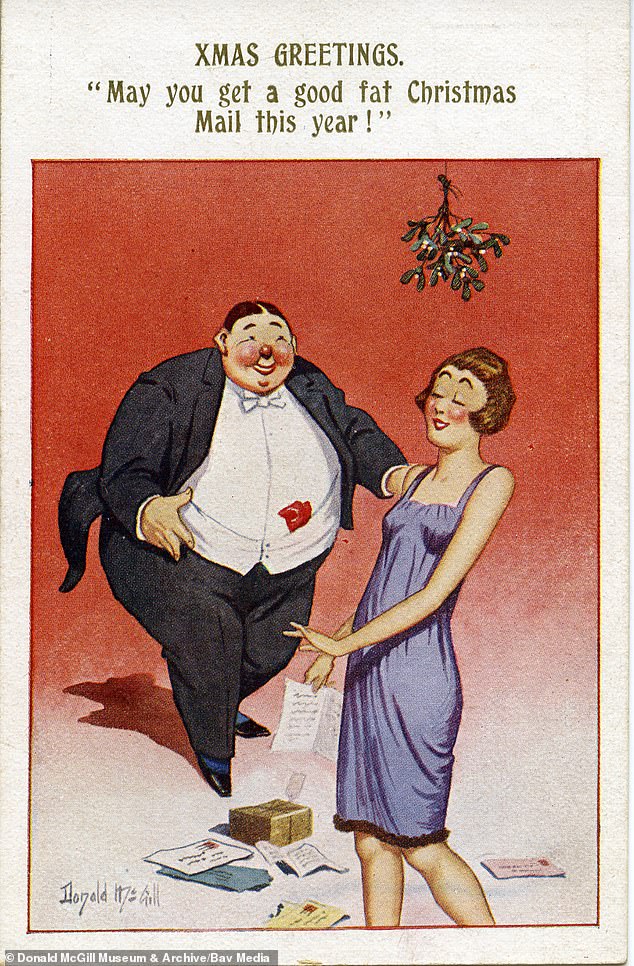 Tried and tested: Another of McGill’s Christmas cards playing on the ‘mail’ and ‘male’ joke

His career was kickstarted by accident when he sent a cartoon to a nephew in hospital of a man up to his neck in a frozen pond.

The caption read ‘Hope you get out!’ and was forwarded to a publisher who commissioned his work.

McGill quickly became an expert in the art of the postcard double entendre and his designs were ingenious, twisted and often downright rude. 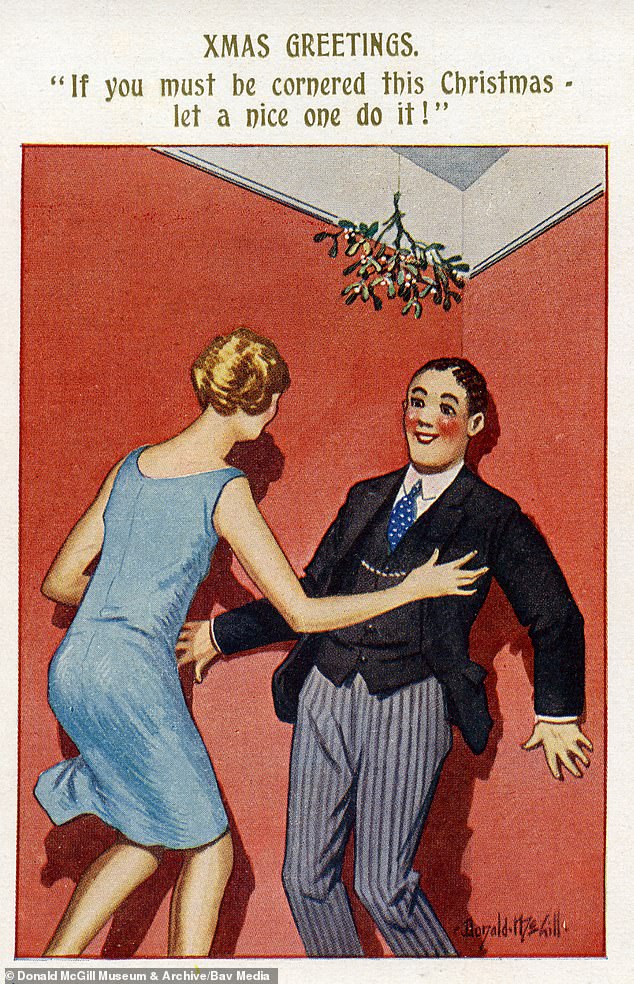 Objectified: This young woman is reduced to nothing more than ‘a nice one’ in this scene 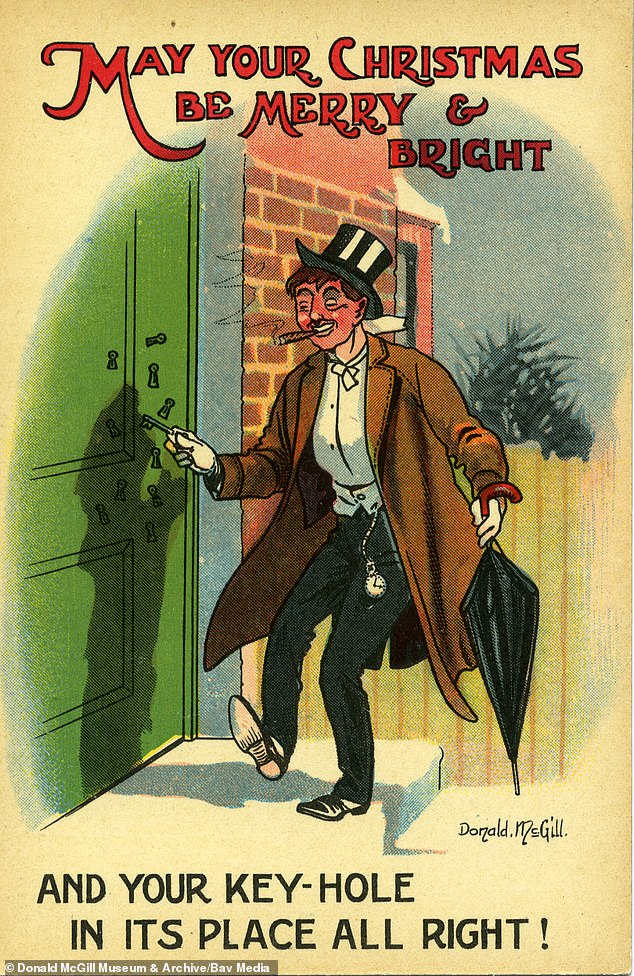 One too many: A tipsy man struggles to open the door on his way home from a festive tipple 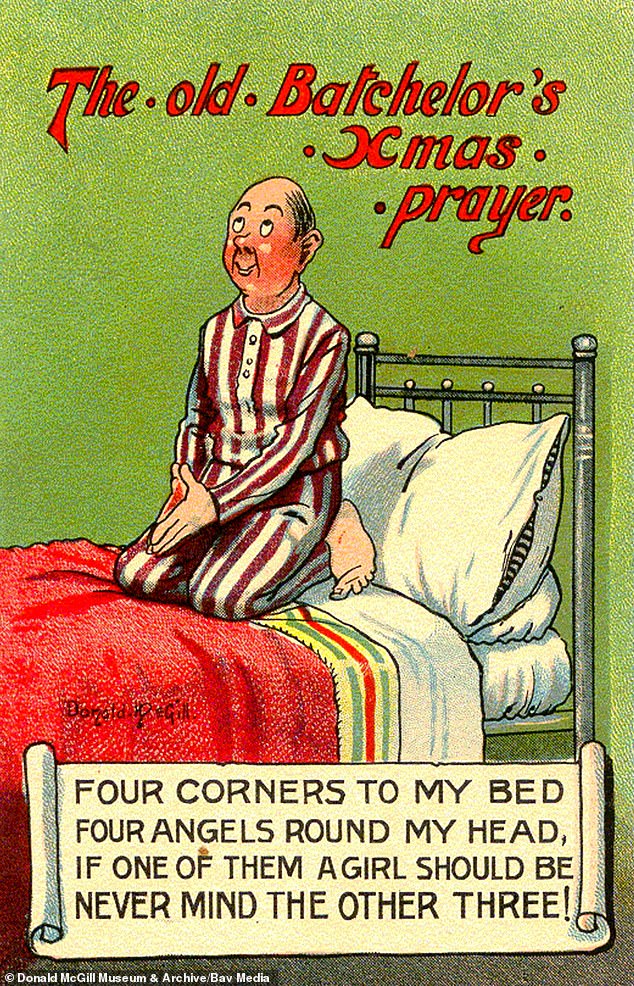 Christmas wish: An ‘old bachelor’ dressed in pyjamas prays for a woman to come into his life 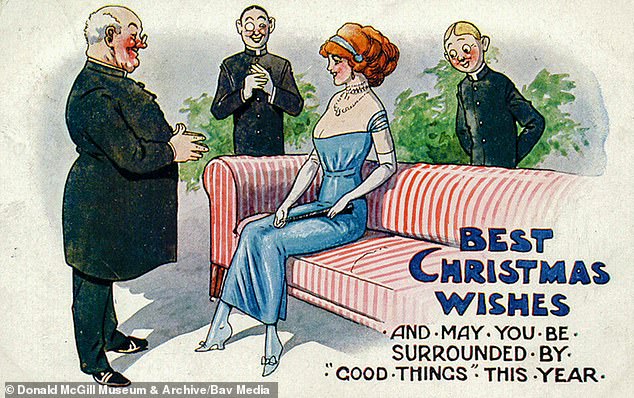 Good things? A well-dressed woman is surrounded by men at a Christmas soiree 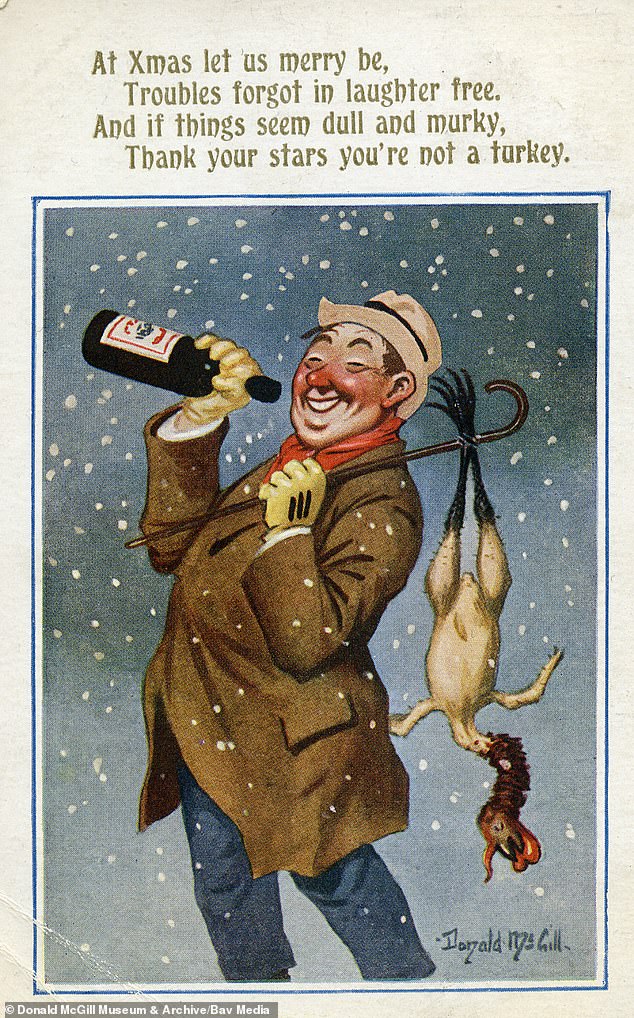 Look on the bright side: The light-hearted card asks readers to spare a thought for the turkey 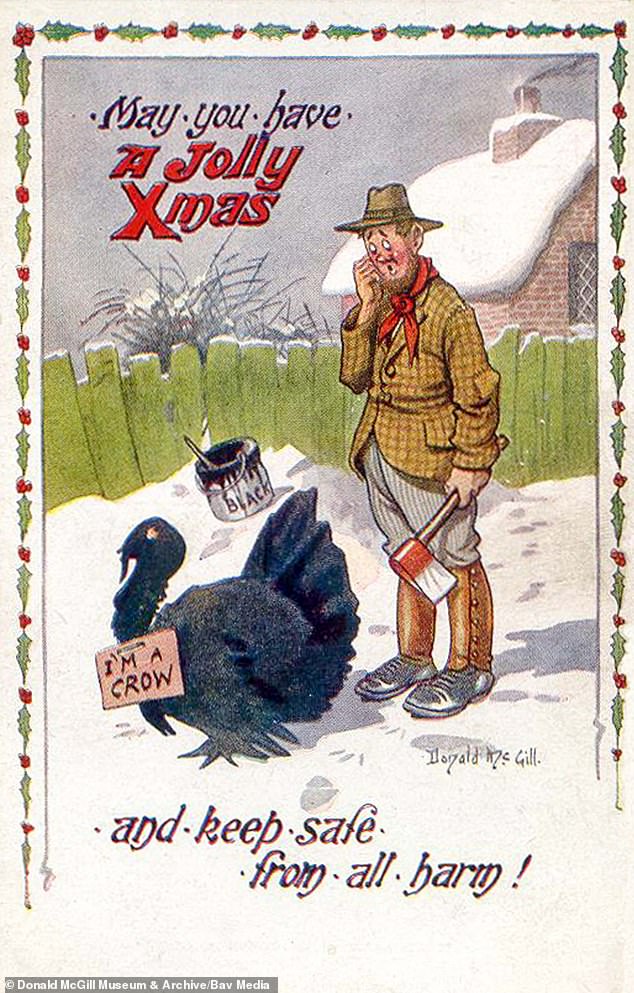 Desperate to hide: A turkey tries to disguise itself as a crow in this playful festive scene

The artist was also drawing at a time when society was emerging from a period of high Victorian morals and many women had chaperones.

In 1954 he was charged with publishing obscene images and four of his cards were banned immediately and 17 more banned once existing stocks had been sold. He died in 1962 at the age of 87.

At the height of his fame McGill only earned three guineas a design, but today his postcards are highly sought after with his original artwork going for up to £1,700 in auction and up to £2,500 in London Galleries. Copies of his Christmas cards fetch up to £50 each on eBay.

McGill’s Christmas cards can be seen at the Donald McGill Museum in the Royal Arcade in Ryde, Isle of Wight. 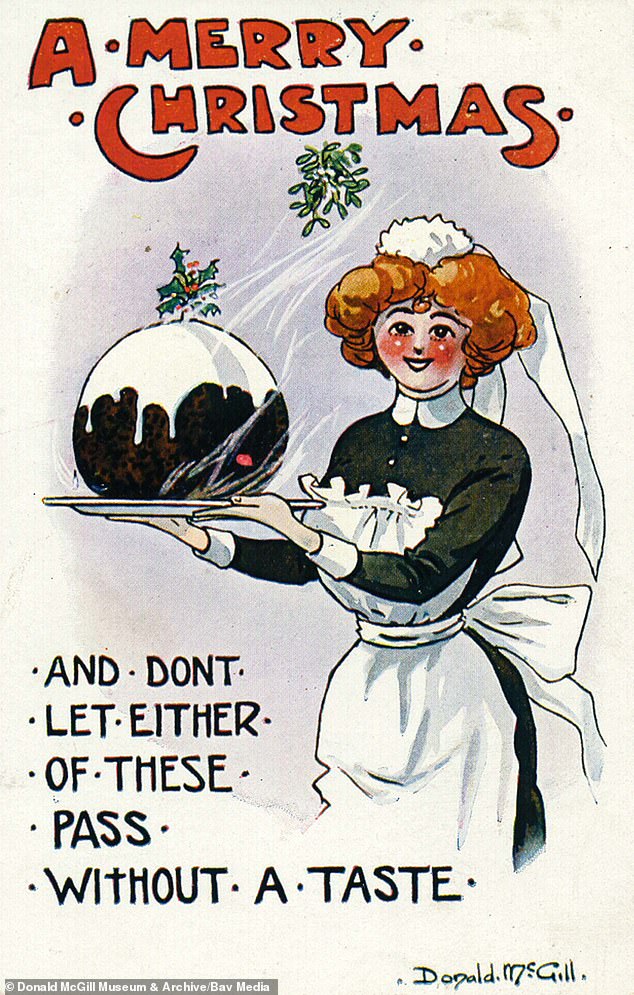 Cringe-worthy: Some of the cards on display would now be considered deeply offensive 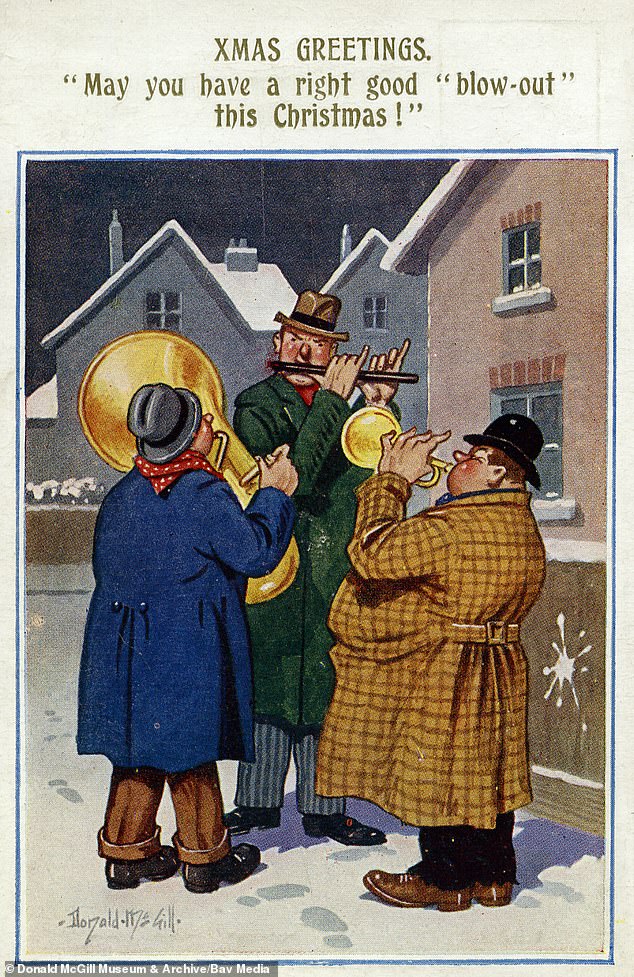 Time to let loose: Another example of McGill’s signature work with double entendre