Don’t leave us elderly alone and forgotten: Esther Rantzen, 79, who is now stuck at home in self-isolation, makes a heartfelt plea to tackle that other plague… loneliness

When Boris Johnson last week warned that ‘many more families are going to lose loved ones’, it was a clear, chilling statement of the reality of the coronavirus pandemic.

But most of us were reassured by the measured words of the two eminent scientists who stood either side of him, about the actions being taken and why.

Over the past few days, though, anxiety about the virus and its impact on individuals and the world economy have taken hold. Are we being told to do the right things? Are we doing enough compared with the rest of Europe? 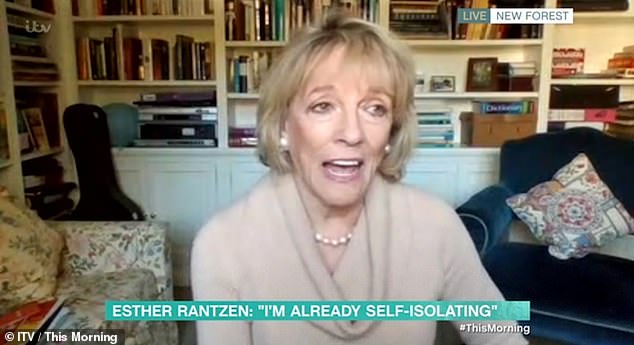 Esther Rantzen, 79, announced she was self-isolating on Monday with her daughter Emily, 42, who has ME

For some, yesterday’s sombre press conference with the PM and those same scientists, in which they anounced further measures to control the spread, reinforced those fears and truly brought home the challenge we face.

This pandemic is a test for humanity. Not just for the doctors and nurses, the paramedics, the epidemiologists and the Government, but for all of us.

It is a moment when each of us should look beyond the confines of our own front doors, our needs and those of our nearest and dearest.

Because unless we do, unless we find imaginative ways to reach out to those who are older, more vulnerable and locked away in their own homes, when the disease eventually retreats we will find, to our shame, that we have lost some of our best and bravest.

For it is the over-70s, now asked to limit contact with the outside world, who showed their strength during World War II and in the postwar years when deprivation was a way of life for many. 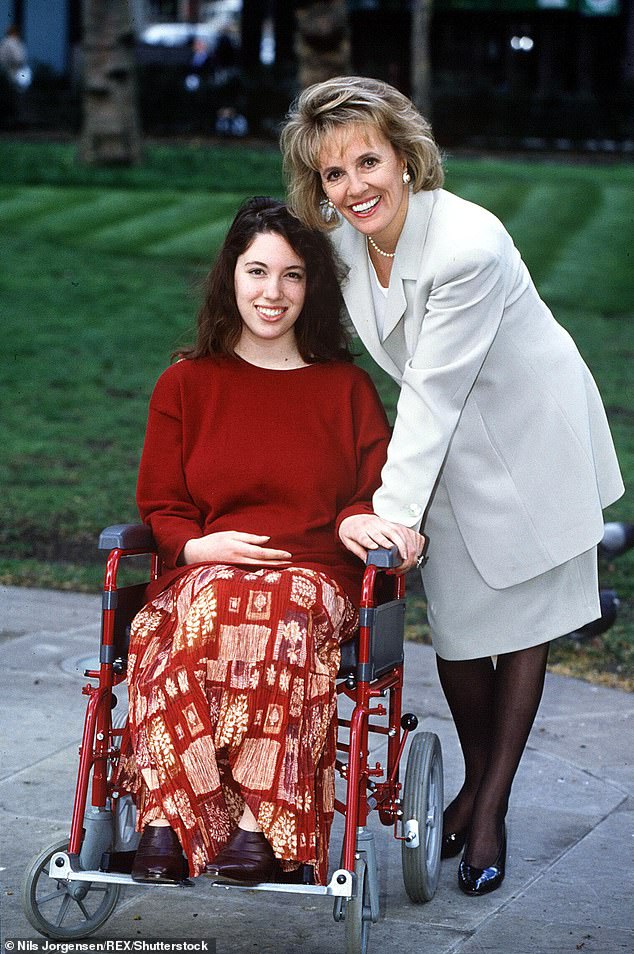 Esther Rantzen, pictured with her daughter Emily in 1996. The mother-of-three revealed she is self-isolating at her home in New Forest, with her eldest daughter Emily, 42, who has ME (Myalgic Encephalomyelitis), as the coronavirus pandemic continues to grip Britain

This is the time for the rest of us to return some of the altruism they showed us.

They are not asking us for huge acts of courage, of the kind many of them displayed when they were living through tougher times than most of us have ever known. This is a different level of sacrifice: one based on small acts of thoughtfulness.

We need to pause a moment to remember the auntie we always meant to phone but never did; the neighbour we used to see on her mobility scooter, passing with a wave, but never invited in for tea.

All the grey-haired ‘wrinklies’ we joked about. Their deafness, their cautious driving, their clutter and grumpiness were easy to deride when the world was arrogant and busy.

We need to ask: can they cope now the world we took for granted has been shaken to its core by an infection we cannot control, which is leaping over frontiers and has the potential to ravage our workplaces, our hospitals, our cities and our way of life?

It’s not complex or strenuous. All it may take is a postcard through the letter box offering help if it is needed, with a phone number.

In normal times they might be too proud to ask for help. They need it now.

Once our elderly are self-isolating, we will need to protect them not only from the virus but from the emotional damage caused by loneliness.

I have learned from the millions of calls made to The Silver Line — a free confidential helpline I founded that provides the elderly with information, friendship and advice — that there is a crucial difference between isolation and loneliness.

I should be on a cruise right now, raising money for The Silver Line. Instead, I am already self-isolating at home. I hate not seeing my grandchildren, my friends, having to cancel meetings and work projects. But isolation must not mean spiritually distancing ourselves, losing touch with everyone we care about.

To be cut off from giving and receiving emotional warmth creates deep pangs of loneliness. I know this from the letters I’ve received from people who have experienced it. Their words show how destructive loneliness is, eroding all self-esteem, everything that gives our lives meaning, our identity, our confidence.

Loneliness can make us feel that merely prolonging life is futile, as our lives are not worth living. As 80-year-old Ellen, disabled and living alone, told me: ‘I am an optimist by nature and often I have to be, when I face another pointless day when I’m a waste of space.’

None of our elderly should feel that way. 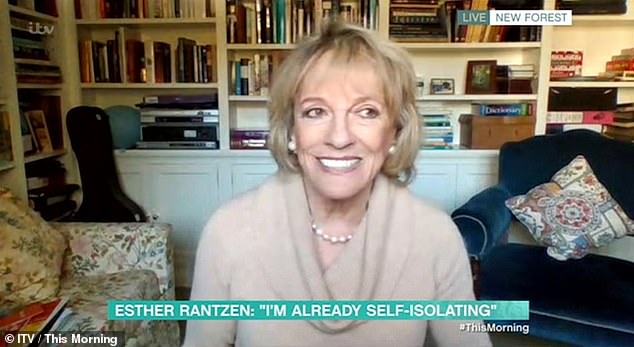 Esther Rantzen used her column in today’s Daily Mail to shed a light on the national plague of loneliness that threatens Britain’s silver generation. She also spoke of the innovative ways we can all help people feel a little more included

Yet the worst of times can bring out the best in human behaviour.

It’s not nice to see the ruthless stockpiling of pasta and loo rolls, and able-bodied young people forcing their way through queues of supermarket trolleys to grab another bundle of kitchen towels. But not everyone is that greedy.

Beverley Smith, a Silver Line volunteer who also volunteers for Age UK, has suggested we all do a little ‘silver shopping’, adding an extra tin of beans or packet of tea to our shopping list and giving it to charities working with older people who cannot afford to stockpile and are terrified of going hungry.

In London, for example, AgeUK Camden is putting together food parcels and creating an online book club and a telephone counselling service. Instead of hosting events that nobody can attend, they will stream them online so people with internet access can still enjoy the music.

Meanwhile, Baroness Joan Bakewell, who is self-isolating, is cooking meals for another self-isolating neighbour and leaving them outside her door. The next day, the neighbour does the same for her.

Just yesterday, an Iceland store in Belfast announced it would dedicate its first shopping hour, from 8am to 9am, to older people and those with underlying health conditions.

My sister, who is self-isolating in Australia, tells me her local stores are doing the same. 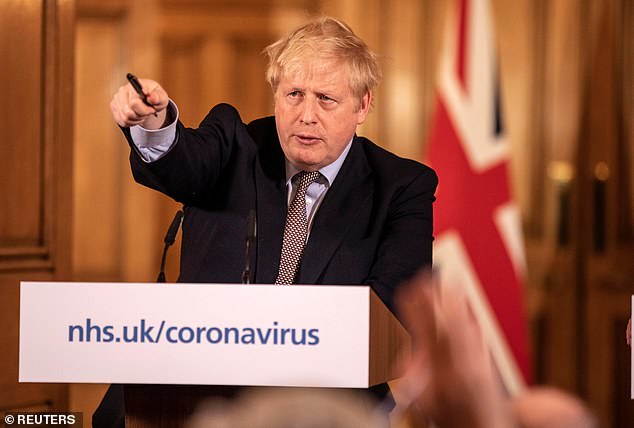 Boris Johnson gave Britain’s latest response to the coronavirus pandemic at a press conference on Monday. It came a week after he warned ‘many more families are going to lose loved ones,’ a statement Esther Rantzen described as ‘chilling’

It’s a contrast to the horror stories coming out of Italy, where older people are reportedly left in hospital corridors to die because doctors only give respirators to the young people they think are more likely to survive. I pray Britain never gets to that stage.

In the meantime, we must not forget that there may be something to gain from our time spent in isolation.

In 1606, Shakespeare was quarantined in London to avoid the plague, and in enforced idleness wrote King Lear, Macbeth and Antony and Cleopatra.

We don’t all have his genius but we may have time to scribble down the life story we always promised our grandchildren, or to declutter our photographs and papers.

I also hope the BBC, between all the grim news coverage, will once again assume its role as the nation’s morale-booster, as it was in the war years. Its decision yesterday to delay TV licence fee changes for the over-75s until August was an encouraging step.

Perhaps it could repeat Yes Minister and Yes Prime Minister to prove there is nothing new about this crisis, and allow Book At Bedtime to devote itself to P. G. Wodehouse and Just William. Bring back Martin Jarvis to send us oldies to sleep with a smile.

And let us also hope that the new links we forge with others, especially our new friendships with the oldest people in our communities, will outlast this vile plague.

If they do, the unexpected consequence might be the eradication of that other modern plague: loneliness.