Chances are if you use the internet, you have a Gmail account. Google’s free email service boasts over 1.4 billion users, so clearly they’re doing something right. Its newest update, which has new features for privacy, convenience, and streamlining work flow, makes the program all the more likable — but some of you may be struggling to see the effects. If you’re wondering, "Why don’t I have the new Gmail update yet?" when it seems like everybody and their neighbor is already seeing the redesign, it’s likely a simple fix.

According to a press release from Google, the newest version of Gmail features improvements aimed at three categories: making the program smarter, making the program easier to use, and making the program more secure. Two of the highlights of the newest version include a mobile-only feature alerts you when you need to respond to an email by learning from which emails you respond to the most or contacts you correspond with most often, and "nudging," which will proactively remind you to respond to emails. The mobile app can now also identify which emails are a priority and only alert you when they are received — an improvement that will reportedly reduct alert notifications by as much as 97 percent, according to Google.

In addition to aesthetic improvements, the update aims to tighten the platform’s security capabilities by allowing users to share emails in confidential mode, as well as adding the option for including a 2-factor authentication code for an email’s recipient (a means of password-protecting what you send.) The new update also allows you to use the platform in offline mode—perfect for using whilst on an airplane (or in other situations with unreliable wifi).

But what what happens when you don’t have the Gmail update yet? Why could that be? And is there anything you do about it?

There are a number of reasons why your Gmail account may not reflect the newest update immediately: first and foremost, new technological updates and features for most programs don’t all roll out at once. This affects the rate at which users will have the updates, and typically not all users get them as soon as they are announced. It is just the nature of releasing something to such a large volume of users.

Second, updates almost always require users have the most recent version of your browser installed. If you have neglected to update your browser (or overall computer software) for a while, you likely won’t see any of the new features. This can be alleviated in a few simple steps: 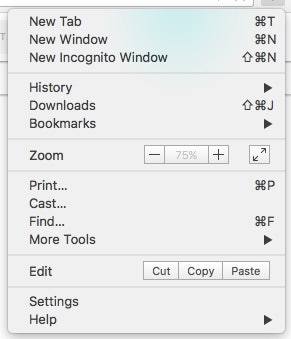 If you are using Google Chrome for a browser you can check to see if you need to update the program by clicking on the line of three vertical dots next to your search bar. If you are all up-to-date, it will look like the screenshot above; if not, it will prompt you to update, which may help the rollout reach you faster.

Unfortunately, there is not much you can do about updates being released gradually. So, if you’re able to determine that is the reason you have yet to receive the newest version of Gmail yet, you just have to be a little patient. It typically only takes a few days or (maximum) weeks for gradual rollouts to complete. But, with all the impressive new features included, it will surely be worth the wait.