Why travel, you ask? Well, because of education, adventure, life-altering experiences and greater perspectives… That and, you know, getting out of the pit of icy hell that is January in NYC/Chicago/Toronto, etc. But if you prefer your sunny escape with a solid side of sustainability, you’re in luck. There are more options than ever for tropical hotels that are doing their darndest to ensure travelers and locals alike (local plants, animals and humans, that is) stay healthy and thriving despite all those air miles and tourist traps. All you need to do is a little research — and in this case, we’ve even done that for you.

On a recent flight to Mexico, I watched the film Beatriz at Dinner in which John Lithgow plays a heartless hotel magnate intent on wiping out as many species (and Mexican villages) as necessary to get his latest construction off the ground. It’s a fantastic film, and it does a great job of making you super-uncomfortable — especially if “you” happen to be an American jetting to Mexico’s Mayan Riviera for funsies. But instead of a glam-yet-toxic hotel chain, I stayed at the Fairmont Mayakoba eco-resort and spent my time ambling through wild mangrove sanctuaries and learning about the resort’s programs to protect countless species — from crocodiles to coral to endangered Melipona bees.

Hotels can be a shady business, it’s true; I’ve seen it. But not all of them are run by evil John Lithgows who treat local flora, fauna and human culture as disposable as long as its disposal will rake in the big bucks. There are good guys — good hotels, rather — out there. You just have to know where to look (and don’t get fooled by the phonies). Ahead are eight of our favorites, so you can take that warm winter vacation and feel good about its — low — impact. As for neutralizing the carbon footprint of all those air miles, well, just keep reading.

A version of this story was originally published in December 2017. 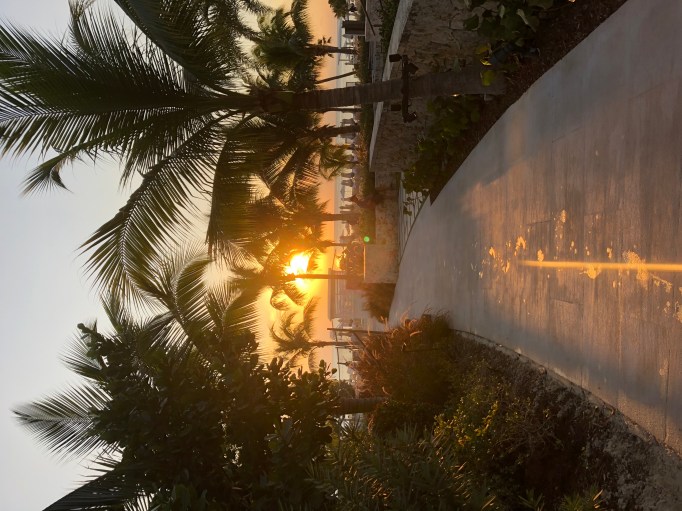 The Kimpton Seafire Resort + Spa, a beachfront luxury resort in the Cayman Islands, is not only beautiful and kid-friendly; the Kimpton team also puts a lot of effort towards reducing the hotel’s carbon footprint.

The Seafire takes full advantage of the natural resources at its disposal, including a Geo-Thermal cooling system that saves thousands of gallons of water each year by using seawater to cool the air conditioning. The hotel also makes good use of that Caribbean sunlight by using solar panels that cover the roof to supply the resort with energy.

We were also happy to learn that the resort uses paper straws, regenerates recycled glass into its pavement walkways, and features turtle-friendly lighting, allowing turtles to journey ashore to lay their eggs. Other beachfront resorts, take note. 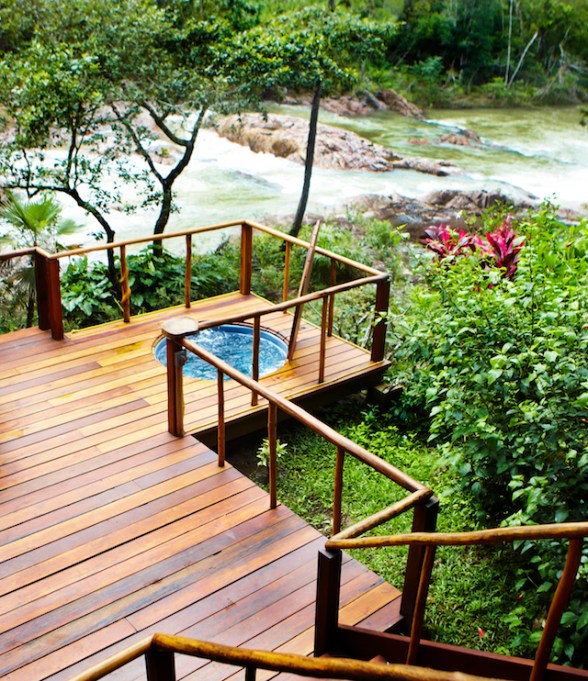 Stay at the Gaïa Riverlodge — smack-dab in the Belizean jungle and penned in by the Privassian River’s Five Sisters Waterfalls — and you may well come into contact with, oh, just about 450 species of birds and plants. The eco-lodge’s stated mission “is to preserve the natural wonders that surround GAÏA.” The hotel is entirely water-powered, it operates an on-site garden to feed guests, and it’s one of only five Green Globe-certified properties in Belize. 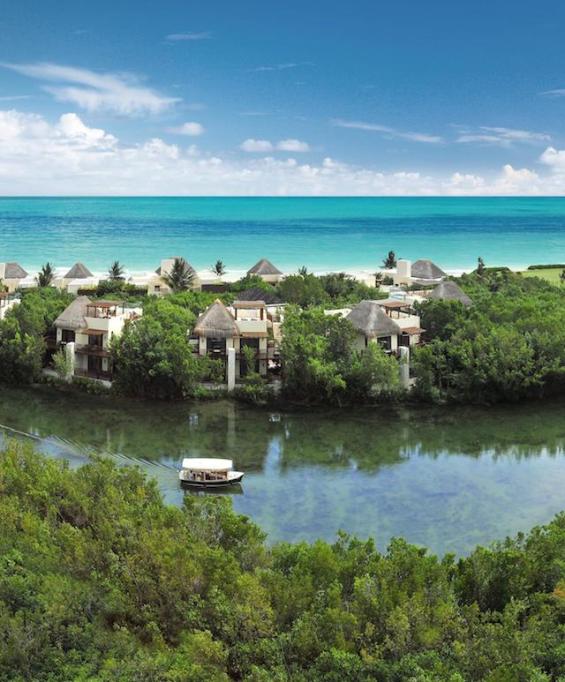 Yes, I already mentioned the Fairmont Mayakoba’s conservation programs for native species on the Riviera Maya. But did you know the accidental addition of African bees to the area nearly wiped out the gentler sting-less Melipona bee variety? Well, Mayakoba (where I was lucky enough to stay as a guest of the hotel) is doing its part to bring those native bees — and their strange fruity honey — back where they belong.

The Mayakoba folks are also often found supporting local Mayan artists and entrepreneurs, finding homes for young crocodiles, tapping chicle trees in the jungle, preserving mangroves and “planting” coral “babies” in the reef-restoration process. (I officially adopted one of said babies and named it after my son; I think it’s his nerdiest mom gift yet.) Oh, and if you stay at the Mayakoba, you too can eat bug tacos. What? Bugs may be the greatest source of sustainable protein there is! The future, folks. 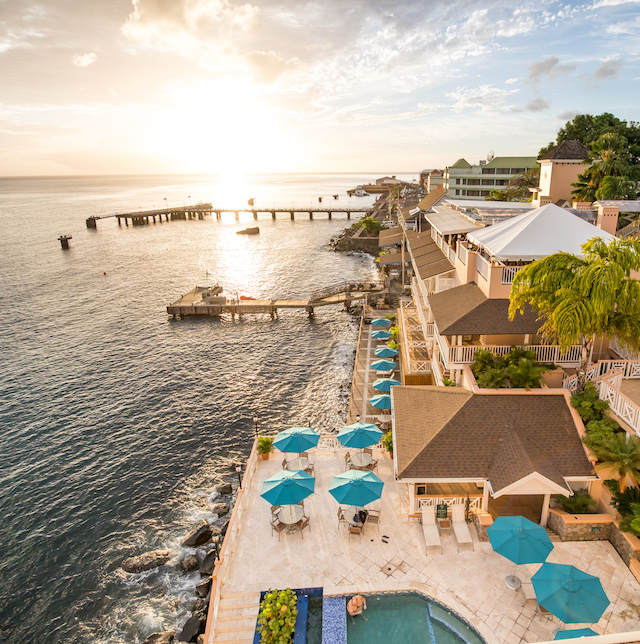 While visiting Dominica, I kept hearing one saying over and over again: “Dominica is the only island that Christopher Columbus would recognize today.” That jerk aside, the point stands. Much of Dominica’s coastline has remained virtually unchanged in hundreds of years. Although recent hurricane damage has sadly devastated a great deal of the island (including my old favorite, Jungle Bay) the Fort Young Hotel is just about ready for its grand — and sustainable — reopening in January 2018.

Fort Young uses all biodegradable food containers and detergents, sources from the local farmers market and island growers and is currently working on an initiative to donate its leftover food to the homeless. Another one of the hotel’s eco-initiatives may seem odd but is actually essential: organized hunting of the invasive lionfish, a predatory species that has overpopulated the area, in order to assist the local ecosystem. “As the hotel upgrades and repairs after hurricane Maria, it’s taking the opportunity to integrate even more sustainable practices in the buildings and its operations,” a Fort Young spokesperson tells me. 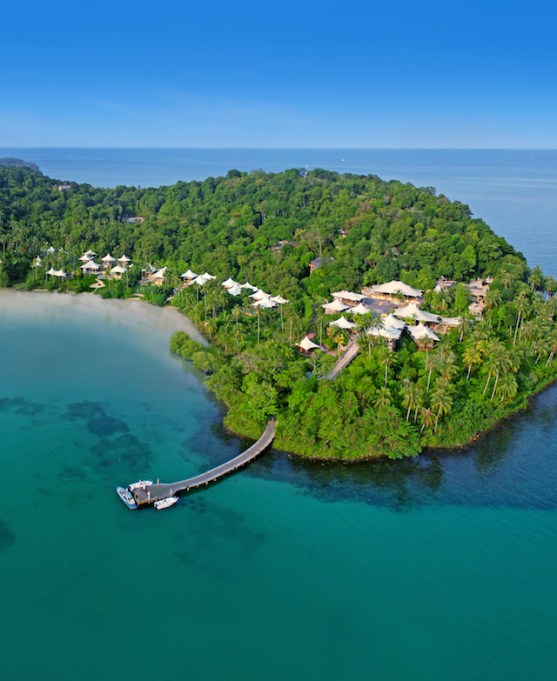 Thailand’s Soneva Kiri bills itself as “barefoot intelligent luxury at its best — no news, no shoes.” But Soneva Kiri isn’t just a pretty face — that is, it’s not just stellar views and pristine beaches and gimmicky treetop dining pods. Nope. Soneva also offers organic gardens, biodegradable products in reusable containers, a recycling center that repurposes 80 percent of the resort’s waste and — random but wonderful nonetheless — it provides fuel-efficient cookstoves to thousands of families in Myanmar. You won’t find uncertified hardwood construction here, but rather local materials such as eucalyptus and bamboo. And to top it all off, Soneva Kiri has a Stay for Good program in which you can swap volunteer hours in these sustainability programs in exchange for a free night’s stay — or three. Soneva became carbon-neutral in 2014 for both direct and indirect resort operations — including guest flights. I told you there was something you could do about all those miles! 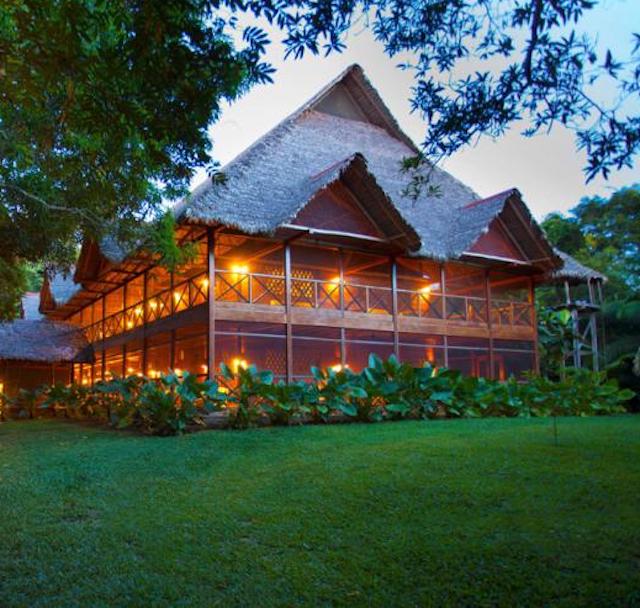 Inkaterra is something of an eco-tourism grandma; back in 1975, its founders recognized the need to preserve the natural habitats, wildlife and heritage of Peru — and the Inkaterra concept was born. To date, the resort’s impressive do-gooder résumé includes protecting thousands of acres of Amazonian tropical forest and Andean cloud forest; creating a rehabilitation center for the endangered spectacled Andean bear (spectacled bears, you guys!); cataloguing and safeguarding hundreds of orchid, hummingbird and butterfly species; and hosting scientists at its properties to aid in… you know, all of that stuff we just listed. The latest addition is the Inkaterra Guides Field Station, a conservation-focused property in the Amazon that opened to the public in 2017 and invites guests to assist the Inkaterra nonprofit in restoring Peru’s ecosystems. So get your spectacled bear-spotting spectacles ready and fly south stat. 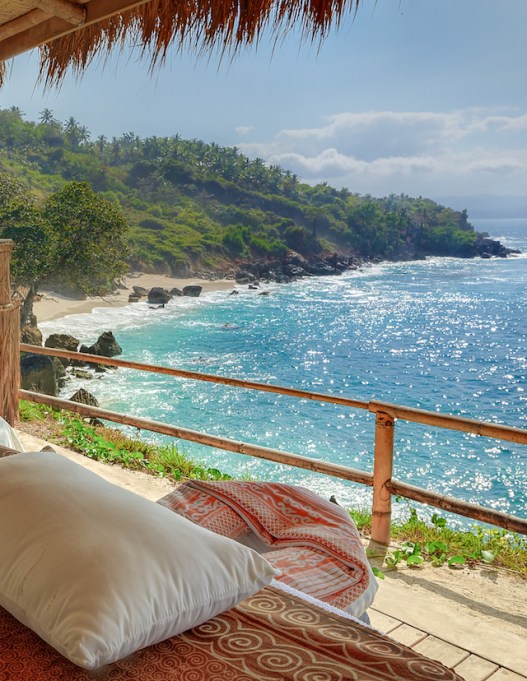 Nihi Sumba Island (formerly Nihiwatu) in Indonesia was named the No. 1 hotel in the world by Travel & Leisure magazine readers in 2016 and 2017 — so there’s that. At press time, the hotel was busy assisting travelers who were rerouted or stranded after the recent volcano eruption in Bali. In calm and in crisis, the hotel remains dedicated not only to its travelers — of both the planned and stranded varieties — but to its local ecosystem and community. “Our guests… want to feel connected and useful, to give back… and ultimately create a charitable impact,” explains hotel owner Chris Burch. With that in mind, the resort — namely, its Sumba Foundation — has set up four local medical clinics for the island, has developed over 100 water wells and water stations, feeds young children in a program against malnutrition, has refurbished 15 local primary schools and provides lunch for over 1,000 schoolchildren five days a week. Are you booking your flight yet? 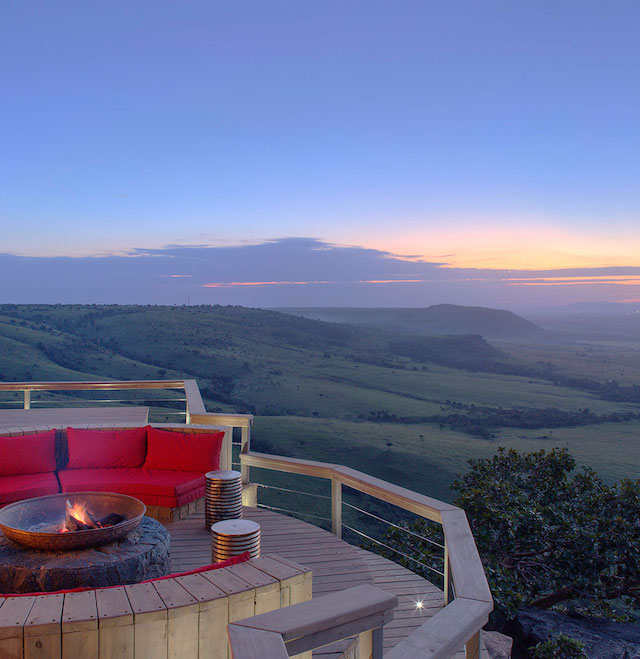 Like Sumba, the Angama Mara safari lodge also has its own foundation, which is funded by a $10 per-guest per-night contribution. Located in the Maasai Mara in Kenya, the Angama recently unveiled its plans for the construction of teacher accommodations at Emurutoto Primary School, three new classrooms at Partakilat Primary School and the accessible-health care Angama Mara clinic. And like any resort worth its salt, Angama Mara provides major job opportunities for locals from the Maasai communities, including naturalists who teach guests about botany, birding (there are 570 recorded bird species here), local medicinal herbs and more. And did we mention there are lions? 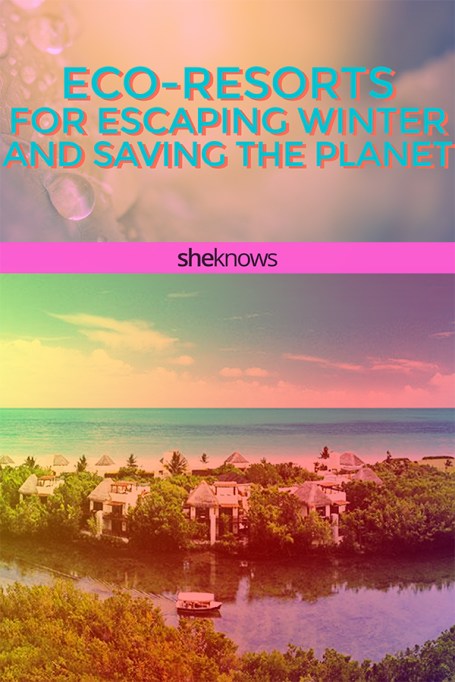 Pin it and start packing.