ENERGY firms have been accused of "exploiting" millions of loyal customers by charging them over the odds by as much as £324 for gas and electricity. 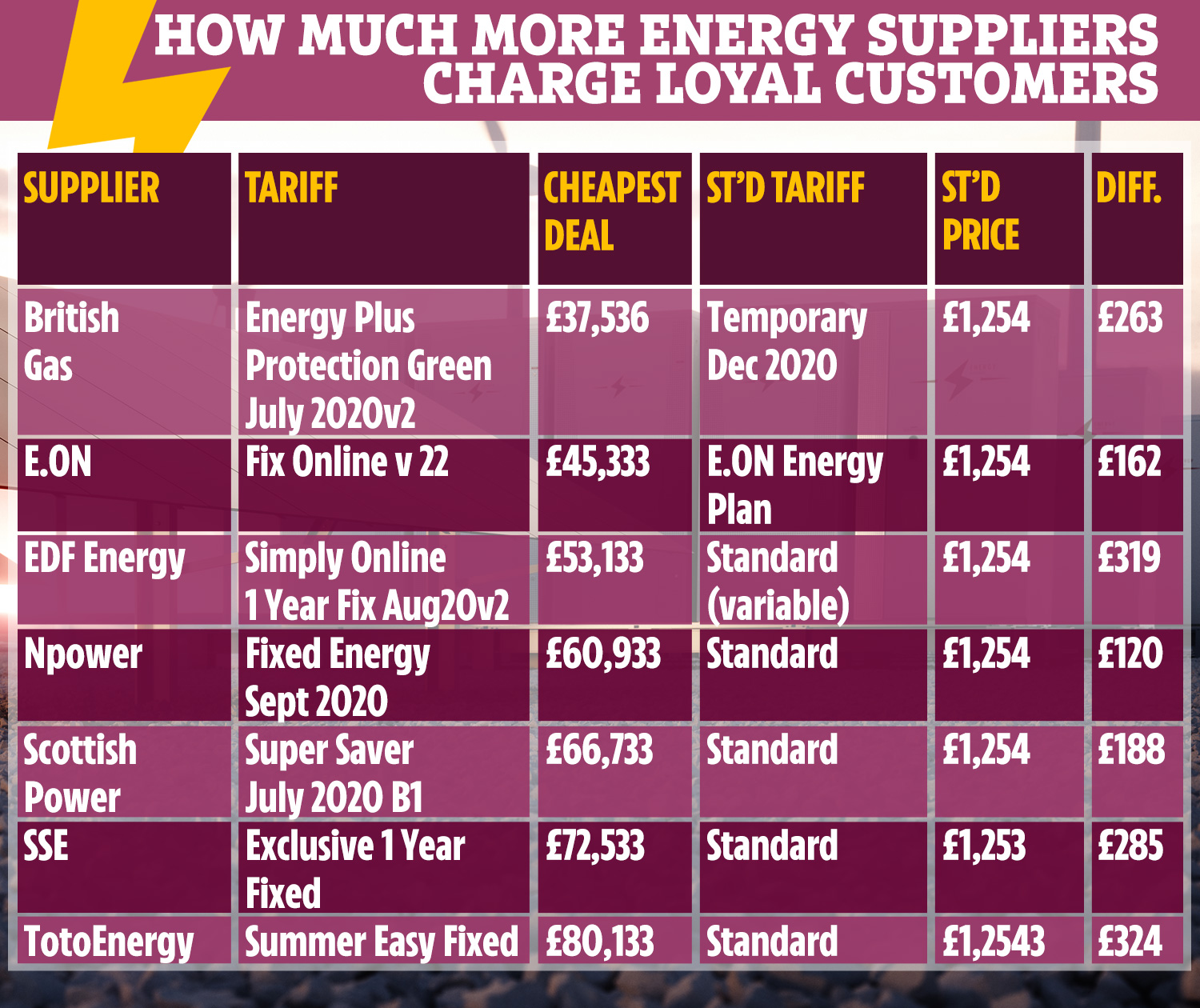 It means that households could be overpaying for their gas and electricity by up to a third if they don't regularly switch suppliers.

Autoswitching service Look After My Bills reckons that collectively, households are missing out on around £1.9billion as a result.

The loyalty penalty is the difference between what a firm charges for its standard variable tariff – what you roll on to when yours has come to an end – and the cheapest fixed rate deals offered to new customers.

A price cap introduced by the watchdog Ofgem limits the amount companies can charge for gas and electricity to stop customers on standard variable rate tariffs (SVR) paying over the odds.

How to switch suppliers and save

SWITCHING suppliers is the best way you can cut your energy bills. Here's what you need to do.

1. Shop around – If you're on an expensive Standard Variable Tariff (SVT) deal you are throwing away up to £300 a year. Use a comparison site like MoneySuperMarket.com or EnergyHelpline.com to see what best deals are available to you.

The cheapest deals are usually found online and are fixed deals – meaning you'll pay a fixed amount usually for 12 months.

2. Switch – When you've found one, all you have to do is contact the new supplier.

It helps to have the following information to hand – which you can find on your bill –  to give the new supplier:

It will then notify your current supplier and begin the switch.

It should take no longer than three weeks to complete the switch and your supply won't be interrupted in that time.

For more advice read our guide on how to switch.

Firms are limited to charging £1,254 for SVRs – a figure that almost all suppliers stick to, which has lead them to be accused of running a cartel.

On average, the Big Six energy firms charge £223 more a year for an SVR than the cheapest fixed rate deals.

The firm's Summer Easy Fixed deal costs £930 on average for the year, compared to £1,254 annual bill for an SVR.

EDF Energy, which has 5.7million customers, charges and extra £319 for its SVR compared to the Simply Online 1 Year Fix Aug20v2.

It costs customers on an SVR with the UK's biggest energy provider British Gas £1,254, but new customers signing up to it's Energy Plus Protection Green July 2020v2 deal with have to pay £991.

That's a difference of £263, making it the firm that charges the fourth largest loyalty premium.

How to make sure you're not being penalised for being loyal

THE best way to beat the loyalty premium is to check if you can switch and save.

These are some of the best websites to use to find a better deal on your provider. Remember though, if you are thinking about switching before your term is up then you could face an early exit fee.

But as a spokesperson pointed out, existing customers can switch to the cheapest deal with British Gas too.

Lily Green, of Look After My Bills, said: "Unless you’re always on your toes and switch every year, you’re stuck in a never-ending cycle of higher prices."

SSE pointed out that its SVR is within the Ofgem price cap.

Banks, insurance firms, broadband and mobile phone providers who charge up loyal Brits up to £1,440 extra a year on household bills could be "named and shamed" in a new crackdown.

The competitions watchdog, the Competitions and Markets Authority, made a number of recommendations following an investigation after a "super complaint" submitted by Citizens Advice found that customers are being penalised by up to £4billion a year for sticking with their provider.

The watchdog also advises Ofcom – the communications watchdog – to put regulations in place to stop mobile phone providers charging pay-monthly customers the same rate once they've paid off their handsets.