In an effort to wean Australia off its reliance on coal as a source of power, the federal government is forcefully putting the case for expanding the use of natural gas. It has some strong arguments in its favour. Australia has a plentiful supply, the pandemic has significantly brought down the cost of using gas, and it can be used for base-load and surge capacity, which is vital when bringing more solar and wind capacity into the energy grid.

The policy has the ear of Australia's Chief Scientist, Dr Alan Finkel, who earlier this year argued at the National Press Club that "natural gas is already making it possible for nations to transition to a reliable, and relatively low emissions, electricity supply". 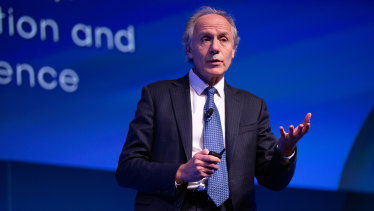 He noted the example of Britain, where coal-fired electricity – which dropped from providing 75 per cent of power in 1990 to just 2 per cent last year – has been mostly replaced by renewables and natural gas, which delivers nearly 40 per cent of its energy needs. And in South Australia, renewables and natural gas each supply roughly half of the state's power supply. With such real-world examples, it would appear a sensible way forward. There is just one potentially very big hitch.

From an environmental perspective, the most compelling argument for natural gas is the perceived acceptance that while it may still be a fossil fuel, it is far less harmful to the atmosphere. But the scientific evidence supporting this claim appears far from absolute.

Serious doubts have been raised by a group of leading Australian scientists who have written to Dr Finkel claiming "the combustion of natural gas is now the fastest growing source of carbon dioxide to the atmosphere". They also put the case that methane emissions, which are more dangerous to the atmosphere than carbon dioxide, are rapidly rising in Australia due to the expansion of the natural gas industry.

About a quarter of man-made global warming is believed to be caused by methane emissions. While the gas is most often associated with emissions from garbage and livestock, there is a growing awareness that natural gas, which is primarily made up of methane, is playing a bigger role in harming the atmosphere.

The Age accepts that there is no perfect path of transition to a world largely dependent on renewable energy. But the Coalition needs to ensure that the proposed cure is no worse than the disease. And Dr Finkel must be certain that when giving credibility to a particular source of energy he has got the science right.

A salient lesson Australia has learnt from the pandemic is that being led by the science has provided the most effective way to combat the virus. It's time the government took a similar approach to climate policy.

The Age understands it would be wildly optimistic to think that it could ever be totally unshackled from the political arena.

The Age’s acting editor, Michelle Griffin, writes a weekly newsletter exclusively for subscribers. To have it delivered to your inbox, please sign up here.

But as the letter to Dr Finkel makes clear, the argument over whether natural gas is the right way to transition to renewable energy is far from settled. It would be prudent of the Coalition to pressure-test its policy to ensure it stands up to scrutiny. There is too much at stake to do anything else.