A century of interiors trends! The decor features that defined each decade – from 1920s Art Deco glamour to the sustainable buys of today

From post-war Art Deco luxury to our current focus on sustainable purchases, these are the interiors trends that have defined the last 100 years.

Lucy Dodds, a writer for UK-based company Mattress Online, examined how our tastes have changed from the 1920s until the present day, and the ways these have been impacted by the state of the economy and social development.

She also spoke to experts who look ahead to the future, explaining why buyers’ interest in upcycling, second-hand pieces and lasting investments is not going anywhere. 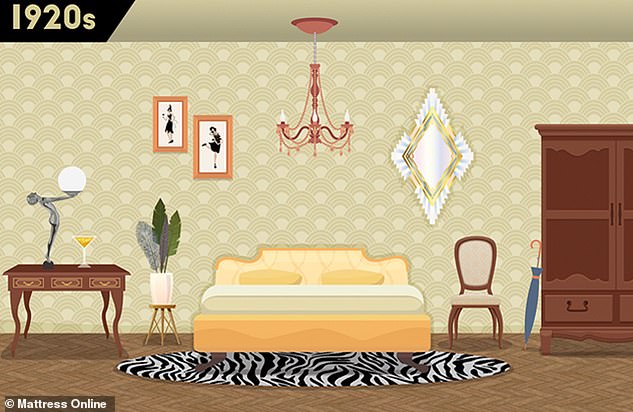 The roaring twenties! The end of the First World War brought with it a collective sigh of relief and a desire to emulate the glamorous, Hollywood lifestyle taking hold in the US

After the First World War ended, the “Roaring Twenties” became an era of indulgence and uninhibited spending. Brits were no longer burdened by war worries and, thanks to a growing economy, we could live our lives to the fullest.

We enjoyed partying at cocktail bars and jazz clubs. It was this glamorous, Hollywood lifestyle that inspired our interior design.

She went on to cite gaudy gold, sumptuous silks and rich mahogany wood as the top trends of the ’20s.

Art Deco design was popular as it represented luxury and sophistication, seen everywhere from mirrors to lighting. To add to the extravagance, exotic animal prints were fashionable as travel symbolised wealth.

1940s – CLASHING FABRICS TO SHOW OFF AND HAVE FUN 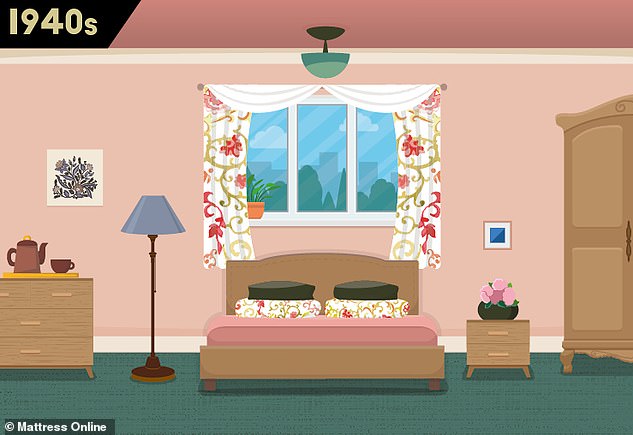 Light relief: Bedrooms were decorated with clashing colour palettes throughout the 1940s, as Brits used recycled materials to add vibrancy and happiness into their homes

HOW 100 YEARS OF INTERIOR DESIGN HAS BEEN INFLUENCED

Throughout the 1930s, interior design was toned down as The Great Depression left people with less money to spend.

However, the end of World War II in 1945 soon paved the way for people to focus on making a new life for themselves.

Bedrooms in the 1940s featured clashing colour palettes, with a lot of green, red and pink. As Brits wanted more vibrancy and happiness at home, but couldn’t afford much, we recycled old fabrics into curtains and bedding

This saw the rise of the floral chintz print. Paler wood was popular too, because it was cheap and made the room feel lighter.

A Slinky toy or Polaroid camera might be lying around – after all, it was now the time to show off and have fun. 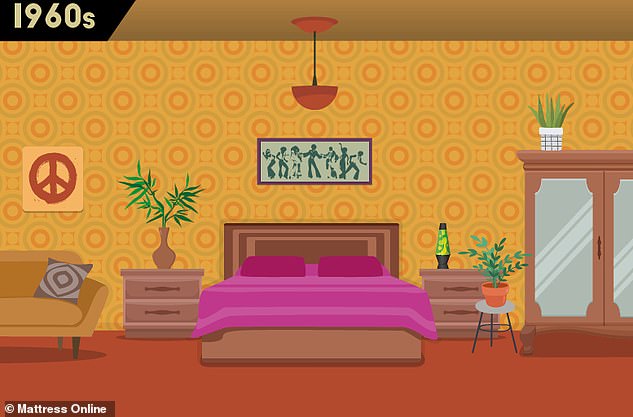 Peace and love: Brits decorated with psychedelic prints and knick-knacks from the hippie trails throughout the 1960s, as peace, love, music and culture reigned supreme

The 1960s were an era of peace, love, music and culture. Britain had left behind its traditional ’50s attitude and for the first time, young people were free from compulsory military service. Our lives were revolutionised and Brits experimented.

Music was a huge influence as we kicked off festival culture and listened to breakthrough bands like The Beatles and The Rolling Stones. A ’60s bedroom would have been inspired by the hippie lifestyle.

Warm colours like tangerine and mustard would be offset with hot pink for a psychedelic look.

Kaleidoscopic prints inspired by the Art Nouveau revival were popular. Accessories included knick-knacks from the hippie trails, like Indian saris or beads– and not forgetting a vibrant lava lamp. 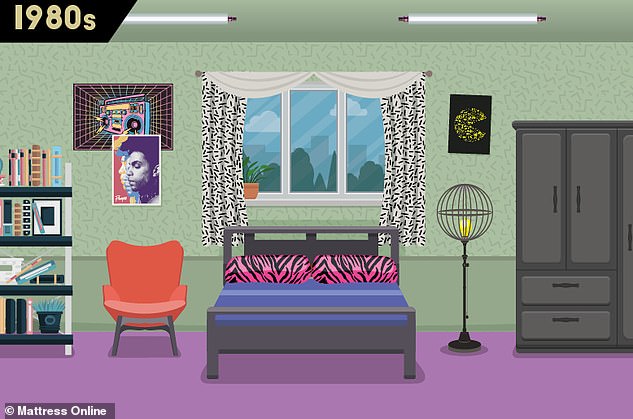 Bold is beautiful: The 1980s was a bold era that saw interiors influenced by music, fashion and the rise in video gaming, with bedrooms styled in metallic materials and neon lights

Throughout the 1980s, our economy strengthened again. UK tax cuts were made to increase our disposable income, but it caused a rise in consumer spending. Brits put more of their hard-earned cash into luxury purchases and the mantra was ‘more is better’.

The colourful decade also tended to embrace fun aesthetics which were reflected in interior trends.

Colour schemes were vibrant and quirky– think turquoise, purple and pink in a mix of neon and pastel shades. Bold graphic shapes were on trend, which were ideal for making curtains stand out.

Anything mirrored or metallic was fashionable, as it was a symbol of glitz and glamour. To really brighten up the bedroom, a neon tube light was essential. You would also have piles of CDs in plastic racks with a silver stereo to play them all. 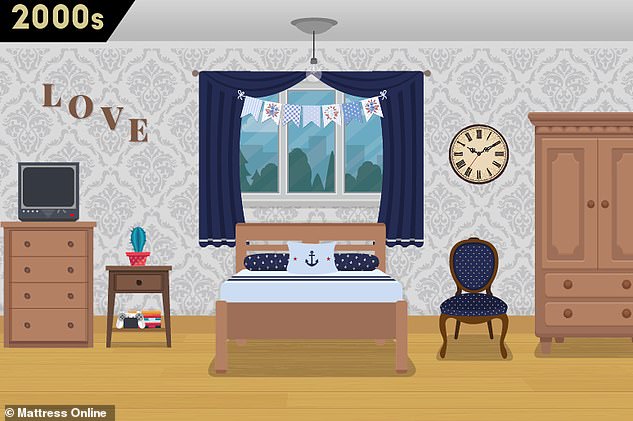 All aboard! Homemade vintage decor became popular in 2000s after the launch of craft website Etsy. Bedrooms often boasted a nautical theme in navy and white

The 2000s carried on the simple, laidback style of the ’90s and the minimalist aesthetic became bigger than ever. As the UK was hit with yet another recession, we continued to keep our interiors cool and contemporary without spending a fortune.

Popular TV programmes like Grand Designs encouraged Brits to embrace their own DIY, meaning upcycling was back. An up-to-date bedroom of the 2000s would have a nautical theme in navy and white colours.

A Damask-print feature wall was a stylish yet practical choice, as it felt luxurious but didn’t break the bank. IKEA wood furniture was still in fashion. But bedrooms of the 2000s were nothing without their homemade, vintage décor, inspired by the launch of craft website Etsy in 2005.

To be really on trend, we’d hang LOVE letters on the wall. The only things that didn’t complete the vintage look were our newly-affordable pieces of technology, like the Nintendo Wii, PC or the iPod. 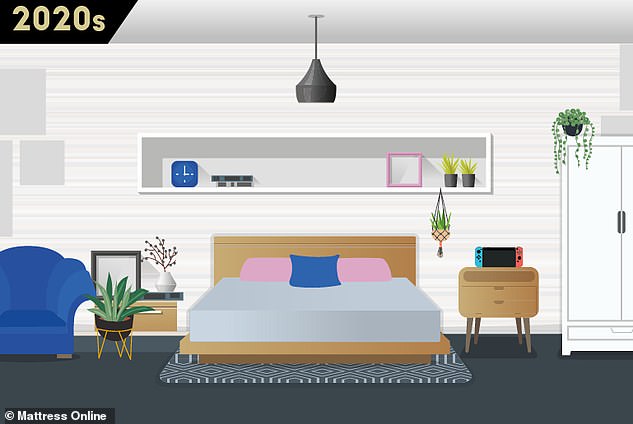 Looking to the future: Experts predicted bedrooms of the 2020s will embrace sustainability and technological advancements, with voice-activated lighting and upcycled fabrics

Speaking about the predicted rise in sustainability for 2020, expert Rachael Kilby-Tyre, who is Design Director at My Interior School, commented: ‘Upcycling and sourcing good quality, second-hand items is gaining popularity.’

She said technological advancements will see ‘voice-activated lighting and even apps to draw your curtains and blinds’.

Managing Director of Sell House Fast Robby du Toit, added there has been a ‘surge in the innovation and development of eco-friendly building materials’.

‘Professionals believe bamboo is the eco-friendly building material that will experience the greatest increase in usage within the property industry in 2020’.

Pantone recently announced their Colour of the Year as ‘Classic Blue’.

Kel Harmer, Creative Designer at Oh So Kel, predicts interiors will be decorated with ‘jewel hues’ and rich shades like ‘warm blush’, as navy, pink, white and grey neutrals are used to create a peaceful ambiance throughout the year.

‘Velvet fabrics will remain popular and we will be accessorising will hanging plants.’