Experts have revealed the language most likely to get you hot under the collar, based on peoples’ reactions to hearing provocative chat-up lines in different dialects.

Global e-learning platform Preply unveiled the languages most likely to seduce, based on the heart rates of participants who listened to flirty clips in different languages while having their pulses analysed.

The research found that Italian speakers made them increase the most, closely followed by those speaking Portuguese, while the Dutch and German language failed to excite participants.

Linguist Aleksandra Stevanovic explained that we perceive languages like Italian as more attractive because they have less consonants stacked together and are thought to be easy for singing, unlike dialects perceived as non-musical such as German. 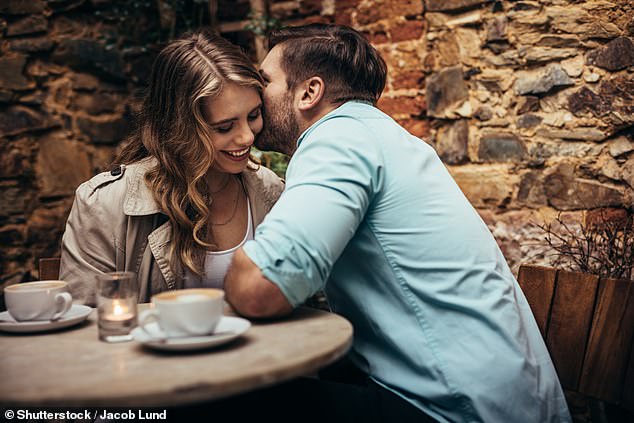 Experts have revealed the language the most likely to get your heart racing, based on the reaction to hearing provocative chat up lines in different dialects. Stock image

She also revealed how to make your voice sound more seductive whatever your native language; by lowering your pitch and speaking slower.

Dutch was the language that got participants least excited, with heart rates only increasing by a mere 12 per cent, followed by German and Japanese with a 15 per cent increase.

The language that came out on top was Italian, with participants experiencing a 23 per cent average uplift in heart rates from 65 bpm to 80 bpm.

This was followed by Portuguese and French, while Russian and Greek also made the top five.

The sexiest languages based on heart rate increase

It seems both men and women are most attracted to the Italian language. However, women seem to be more wowed by French with a 22 per cent increase in bpm – while men saw a 17 per cent increase.

So why are certain languages less tempting than others? Linguist and translator Stevanovic explained that languages which follow the pattern of one-vowel-one-consonant, like Italian, are perceived as more attractive.

She told: ‘Languages with lots of consonants stacked together in so-called consonant groups are perceived as non-musical.

‘These types of languages – which include Slavic languages and German – are often perceived as less “attractive”.’

‘The languages perceived to be easy for singing like Italian follow the pattern of one-vowel-one-consonant, so every syllable ends in a vowel.

‘These sound musical to human ears, which can be perceived as more “attractive”.’

Jo Silverwood, head of translation and localisation at marketing and advertising company META, also claimed that it could also be cultural stereotypes about a country which make the language more or less attractive.

‘By far one of the sultriest languages is French,’ she said. ‘It’s the je ne sais quoi that makes it sound so charming, but is this down to linguistics, or social and cultural reasons?

‘We have a stereotypical view of the French with their stylish haute couture, fine wines, and romantic Parisienne landmarks.

‘However, the phonemes of the French language mimic the husky, “sultry” hoarseness we’ve grown to love.’

How to make your voice sound more seductive

Linguist Aleksandra Stevanovic says: ‘Think of Benedict Cumberbatch. He deliberately slows down and lowers his voice. A lower voice is also associated with higher authority and confidence – and confidence is a very attractive quality to have.’

‘By speaking slowly, you will be perceived as more confident as you won’t trip over your words or stutter – something that can happen when our brains send mixed signals to our vocal cords.’

‘Channel the likes of Scarlett Johansson and try to deliberately aspirate your vowels (send extra air). A low, husky voice that sometimes “breaks” is thought of as very seductive.’