A wake-up call barely after five in the morning hardly sounds like a prize worth winning. Nor were the pre-trip suggestions to cut down on coffee, chocolate and alcohol.

Neither formed part of the description, in 25 words or less, of my favourite way to relax that won me a weekend at a posh fat farm on the Gold Coast.

Yet the point of entering this competition was the win rather than the prize. 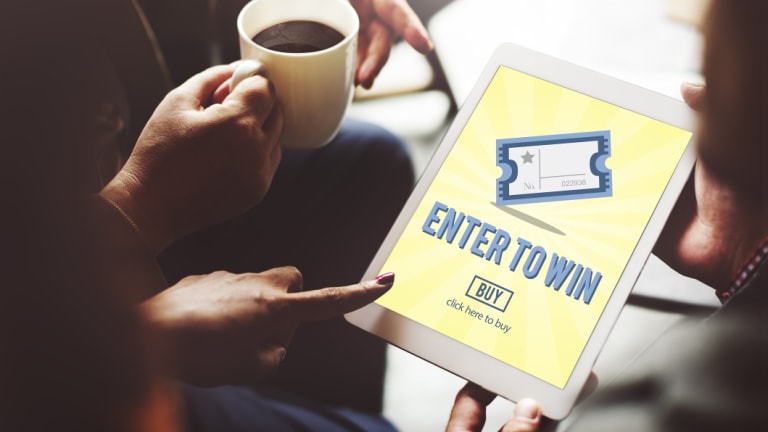 The love of entering competitions runs in the Taylor family.Credit:Shutterstock

Of all the bad habits I developed in childhood, few have been as enduring or enjoyable as my love of entering competitions. Years ago, I won a four-wheel drive for a weekend after composing an "inspirational”(so I was told) 25-words-or-less entry comparing myself to Cathy Freeman, whose Olympic gold medal win was still fresh in minds.

Pity, I didn't have a valid driver’s license.

Nor was my brief stint as a vegetarian a barrier to entering and winning a meat tray at the Murwillumbah Services Club.

This competitive habit runs in the family. My sisters would take it in turns with me to sit by the tinny transistor radio all afternoon waiting for the jingle, song or secret sign to be the 15th caller to dial in to the local radio station.

There were the weekly competitions in the local newspaper to win McDonald's Happy Meals. The prizes had little monetary or nutritional value, but that did not stop the Taylor children running up substantial postal bills to send off entries.

We inherited our competitive gene from our mother who hit the jackpot in the early 1980s after winning a video cassette recorder at the Bendigo branch of a home appliances store. We became the first house on the street with the technology to tape LA Law and Young Talent Time. Admittedly, our street was a dirt lane with two other houses and a lot of cows.

My sister bested that effort a few years later by winning a trip to London for a week, earning the pride of her parents and envy of her siblings.

I also share a competitive streak with my colleagues, including one who scored a big-screen plasma television and Playstation after winning a competition to choose the homegirl of the year in Picture magazine. Another colleague won a stereo at the opening of a Barbeques Galore store in Lismore after shamelessly gaming the prize draw with dozens of entries.

Suzan Burton, a professor of marketing at Western Sydney University, says these type of competitions rely on the idea of “intermittent reinforcement”.

“It’s the same principle as poker machines,” she says. “We love to get an unexpected surprise.”

“People love to get things for free and thus to win things,” Dr Burton adds. “So that’s why we love competitions.”

Except some wins, such as my weekend on the fat farm and my colleague’s plasma telly and Playstation, are not free.

Dr Burton says the cost of entering competitions often involves handing over personal information. “Increasingly, they’re run to obtain data,” she says. “The fine print usually says your details can be used for marketing purposes and that data is very valuable to companies.”

Companies also run competitions to raise brand awareness, increase customer loyalty, promote new or specific products and to help generate sales, according to Ross Gordon, an associate professor in the Department of Marketing at Macquarie University.

“Competitions appeal to our basic psychological interest and desire to compete,” he says. “It is argued that competitiveness is a basic biological trait that can be related to our need for survival.”

A competition may provide motivation to “engage” with a product or brand, but Gordon says once the chance, however remote, of winning a prize is no longer there, that engagement may cease. “So companies then need to seek to keep consumers engaged in other ways and normally through other forms of marketing activity,” he says.

One of my favourite books as a child was Absolute Zero, part of The Bagthorpe Saga by English author Helen Cresswell about an eccentric family whose bickering and bad behaviour provided a refreshing antidote to the anodyne characters who often populate children’s literature.

Like the Taylors, the Bagthorpes embark on a competition-entering craze after Uncle Parker wins a Caribbean cruise for coming up with a slogan – “Get Tough With Sugar Puff” – for a brand of cereal.

Short and sweet, but surely not as good as my winning words about my favourite way to relax: “Diving into the ocean and swimming past surfers and beyond the break until I can turn around to admire the beauty of the coast.”