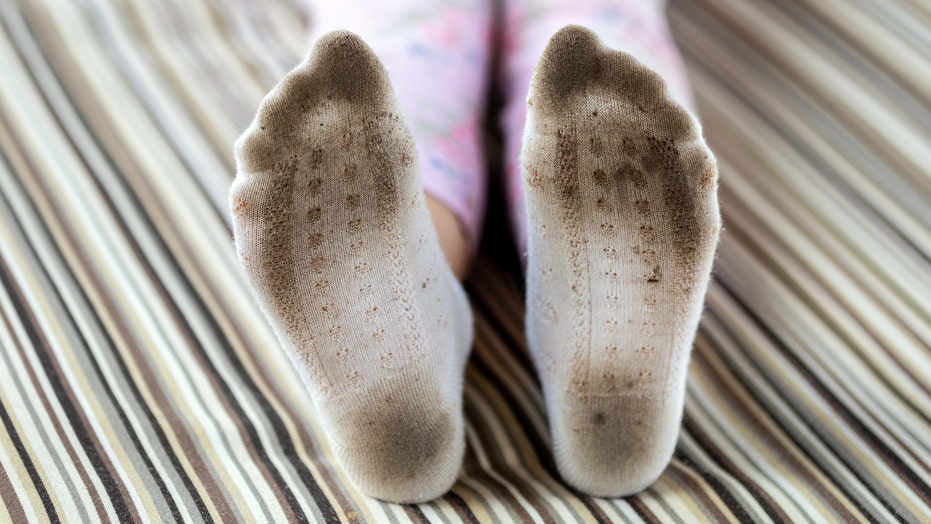 Sometimes you’ve just got to air your family’s dirty laundry.

A funny mom's hilarious parenting prank is being celebrated on social media after she transformed her daughter's stray sock into a mock art exhibit.

Xep Campbell had noticed her daughter Kestrel's dirty sock on the bathroom floor, but left it there for a week to see if her kid would pick it up, as part of a “sociological experiment.” And because the girl didn’t touch the sock either, the mom felt she got the green light to get creative.

“I decided it must be intentional and deserved recognition as such. I made this little label hoping it would motivate her to pick it up,” Xep joked, sharing photos of the sad sock, now accompanied with a realistic museum label. According to the playful plaque, the "The Forgotten Sock" was a mixed media item created Nov. 26, and “on loan from the collection of the artist.”

Though Kestrel initially questioned her mother’s intentions, she soon joined in on the fun, and even made a proper pedestal for the sorry sock — before her mom took it to the next level.

“I figured as long as it was on display, it deserved an audience so the barnyard animals arrived. They find it very fascinating,” Xep joked of the figurines she added around the sock. As seen in now-viral photos, Xep went wild and later added a miniature monolith, Christmas lights and action figures, and used the sock in lieu of a cradle for a Nativity-like scene.

Fans praised the prank as “absolutely fantastic” and “very witty" on Facebook, where the post has received over 50,000 likes and 131,000 shares.

“You guys are hilarious!” one said of the mother-daughter duo.

In a follow-up post, Xep thanked commenters for the well-wishes, explaining that she and her daughter share a great relationship and love to joke around together.

“I honestly did not except this post to go viral — it was just another silly thing we did,” the parent shared.

Though some have since urged her to transform "The Forgotten Sock" into a book or otherwise cash in on the viral moment, Xep instead asked fans to consider donating to the Jumping Mouse Children's Center, a group that provides mental health therapy for children who have experienced trauma.

According to a Monday post from the center, the amusing art has won a windfall for their cause.

“Thank you Xep for curating this wonderful piece of art, and for bringing joy and light to the world during this time,” a spokesperson for Jumping Mouse wrote on Facebook. “We are overjoyed to be receiving donations in honor of ‘The Forgotten Sock,’ which as of this morning has 152 donors totaling $4,014. This is a record number of donations for us in a 24 hour period.”