Faith Stewart-Gordon, Doyenne of the Russian Tea Room, Dies at 88

Faith Stewart-Gordon, an actress who traded Broadway for blini when she married the owner of the Russian Tea Room in Manhattan and then spent nearly three decades as its owner, greeting the glitterati who dined there in her incongruous Southern lilt, died on Friday at her home in New Preston, Conn. She was 88.

Her death was confirmed by her daughter, the singer Ellen Kaye.

Ms. Stewart-Gordon owned the storied restaurant on West 57th Street from 1967, when her husband, Sidney Kaye, died, until 1995, when she sold it to the restaurant impresario Warner LeRoy.

She promoted it as “slightly to the left of Carnegie Hall,” which was geographically accurate if metaphorically less so, since it was founded in the late 1920s by White Russian expatriates who had fled the Bolsheviks.

Under Mr. Kaye and Ms. Stewart-Gordon, the Russian Tea Room became the de rigueur lunch, dinner and after-show gathering and gossiping spot for anyone who was associated with the performing arts, or wanted to be.

Ms. Stewart-Gordon had her first meal there as a teenager in 1949 with her mother and a cousin, who was making her singing debut at Town Hall that night; visited several years later with an actor who, she wrote in “The Russian Tea Room: A Love Story” (1999), “brought me there for drinks hoping the free hors d’oeuvres would substitute for dinner”; and stopped by in 1955 for a third time, after a boring dinner at a Chinese restaurant with another date who suggested they stop by and meet a friend, Mr. Kaye.

The Russian Tea Room was where Dustin Hoffman first appears to his agent in drag in the film “Tootsie” (1982); where Leonard Bernstein scrawled the first bars of “Fancy Free” on a napkin; where Madonna was fired as a coat-check clerk after stuffing her demo tapes in the pockets of potentially helpful patrons. It was where Elizabeth Taylor flaunted her 33-carat engagement ring from Richard Burton and where scenes from “Sweet Smell of Success” (1957), “When Harry Met Sally” (1989) and Woody Allen’s “Manhattan” (1979) were filmed. 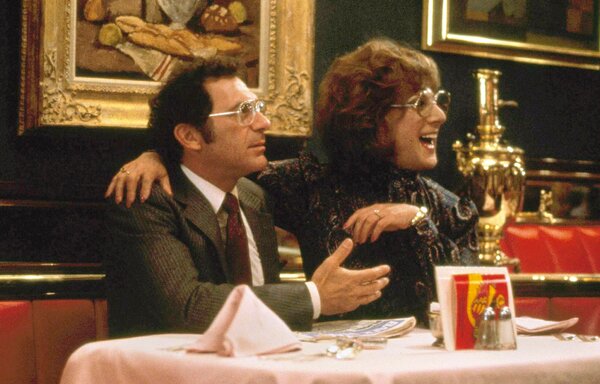 George Balanchine, Salvador Dalí and the talent agent Sam Cohn were regulars. Rudolf Nureyev told Time magazine that the Russian Tea Room was what he liked most about America. It is said that the impresario Sol Hurok, who occupied the first table in the alcove on the left, once entered weeping, explaining that he had just attended a screening of the most affecting film he had ever seen: “The Sol Hurok Story.”

Although the restaurant attracted an insider clientele, Ms. Stewart-Gordon said she always felt like an outsider: as a woman, as a child of divorced parents, as a Southerner in New York. But she was never overly impressed by all the celebrities she encountered, Clark Wolf, a restaurant consultant who worked for her, told The New York Times in 1995.

Shortly before he died, she recalled, Mr. Kaye told her: “I’ll give you three months after my death to decide if you want to keep it. My advice is to take the money and run.”

But, she added, “I felt the Tea Room had to continue. It was a cause. It had to do with him, of course. I’d be letting him down otherwise. This was my destiny.”

Faith Courtney Burwell was born on May 14, 1932, in Spartanburg, S.C., to Ernest Burwell, a Chevrolet dealer who had been a lieutenant commander in the Office of Naval Intelligence during World War II, and Faith (Courtney) Burwell, a homemaker.

Two great-uncles fought in the Confederate Army. Her nickname was Plum, short for “sugar plum.”

She attended Converse College in Spartanburg and graduated in 1953 from Northwestern University in Illinois, which she attended on an acting scholarship and where she studied with the director Alvina Krause. She was admitted to the Yale School of Drama, she later recalled, but chose instead to accept a part in a touring production of the musical revue “New Faces of 1952” with Eartha Kitt and Carol Lawrence. She also appeared in the film version.

She made her Broadway debut in 1954, delivering two lines in a production of “Ondine” directed by Alfred Lunt and starring Audrey Hepburn and Mel Ferrer.

When she married Mr. Kaye in 1957, they may have seemed an unlikely couple: He was the son of Jewish immigrants from Russia, she was a Presbyterian Southerner. But their marriage lasted until his death, 10 years later.

In 1970 she married James Stewart-Gordon, a roving editor for Reader’s Digest. They divorced in 1991. In addition to Ms. Kaye, her daughter from her first marriage, she is survived by a grandson.

For years, Ms. Stewart-Gordon resisted huge windfalls for the property and even for the air rights, which is why the 20-foot-wide building still separates two residential behemoths, Metropolitan and Carnegie Hall Towers.

But she finally accepted Mr. LeRoy’s offer of $6.5 million. After a four-year, $36 million renovation, the restaurant reopened, but it closed again shortly after Mr. LeRoy died in 2001. It reopened in 2006 under new management.

After writing her memoir (she had already published two cookbooks), Ms. Stewart-Gordon retired to Bridgewater, Conn., where she lived with the literary agent Helen Brann, whom she married in 2004, and resumed her avocation of painting (she had begun studying art when she was 6 with Grace Annette DuPré, a portrait artist who lived in Spartanburg). Ms. Brann died in 2015.

In the epigraph of her memoir, Ms. Stewart-Gordon wrote: “I am growing old and frivolous. I miss the seriosity of my youth.”

That youthful seriousness included transforming a dreary tearoom where aging Russian monarchists pined for the Romanovs, as Mr. Kaye had received it, into an incandescent destination decorated with samovars and Art Deco chandeliers festooned with gold tinsel and red balls so that, as the restaurant critic Frank Bruni wrote in The Times, “every day is Christmas.”

Her goal, said Mr. Wolf, the consultant, was “to make the restaurant look the way people remembered it, not the way it was.”