Mother of man, 24, with rare genetic disease reveals the family feel ‘completely forgotten about’ after she was told to buy PPE for his NHS-funded carers during pandemic

The family of a disabled man say they have been ‘completely forgotten about’ after they were told to source protective equipment for his NHS-funded carers themselves – despite inflated prices and quality concerns.

Cameron Harrison, 24, from North Hertfordshire, who is blind, has limited hearing, is unable to speak, uses a wheelchair and is tube-fed, has adrenoleukodystrophy (ALD), a genetic illness which means he requires around-the-clock care.

While he would normally have three NHS-funded carers and community support, the family have been managing with just two carers throughout the pandemic and have been required to supply them with PPE.

Cameron’s mother Karen, 50, revealed she is concerned about how long the crisis may go on for, saying: ‘It is hard work and at the moment both me and my husband are just emotionally and physically drained.’ 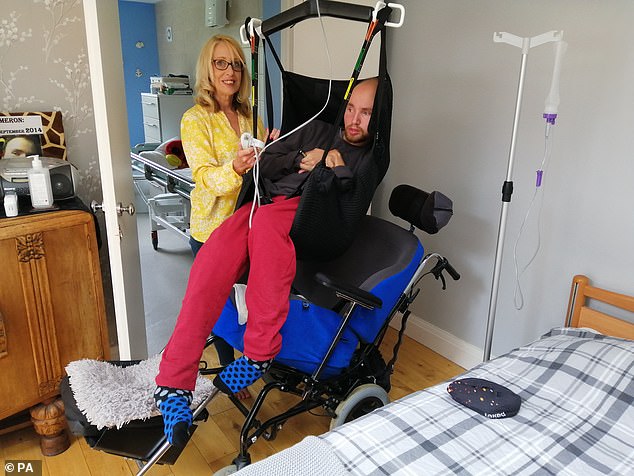 Cameron Harrison, 24, from North Hertfordshire, has adrenoleukodystrophy (ALD), a genetic illness which means he requires around-the-clock care (He is pictured with mother Karen) 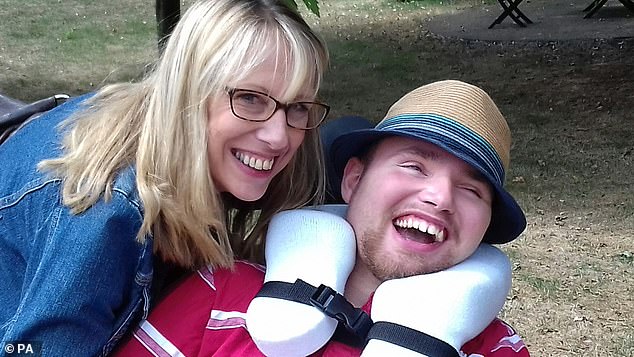 Prior to the Covid-19 outbreak, Cameron had three NHS-funded carers who would visit each day, but the family have been managing with two since the outbreak (He is pictured with mother Karen on a trip to the park)

Prior to the Covid-19 outbreak, Mr Harrison had three carers who would visit each day, in addition to attending a sensory college run by disability charity Sense during the week and residential care for 60 days a year.

Karen, who works for the Leukodystrophy Charity – which helps families with conditions like her son’s, said only two carers were now able to help and all other support had stopped.

She said: ‘He needs full personal care. Everything that Cameron needs, we have to do for him.’

Cameron’s carers are paid for through a personal health budget provided by NHS Continuing Healthcare. 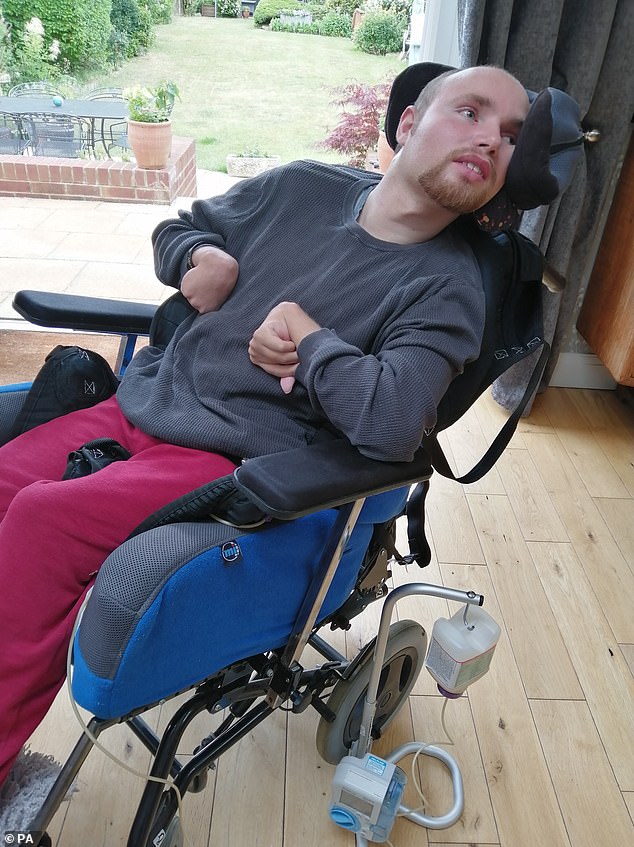 Cameron is blind, has limited hearing, is unable to speak, uses a wheelchair and is tube-fed, meaning he requires care all the time

NHS Continuing Healthcare is a package of care provided outside hospitals, such as carers in people’s homes, that is arranged and funded by the NHS through clinical commissioning groups.

The budget is provided into an account for Cameron’s care and is paid out to the carers, who are recruited and managed by his mother, rather than being provided by an agency.

In March, Karen contacted the NHS to ask about personal protective equipment (PPE) for the carers.

Karen said: ‘They said you could use your personal health budget to actually pay for the PPE but they weren’t helping at all to source the PPE.

What is Adrenoleukodystrophy (ALD)?

Adrenoleukodystrophy, or ALD, is a deadly genetic disease that affects 1 in 17,000 people.

It is an X-linked genetic disease, therefore it mostly affects boys and men.

ALD involves multiple organs in the body so it most prominently affects the brain and spinal cord.

This brain disorder destroys myelin. Myelin is the protective sheath that surrounds the brain’s neurons.

Without the myelin sheath the nerve cells that allow us to think and to control our muscles no longer function correctly. 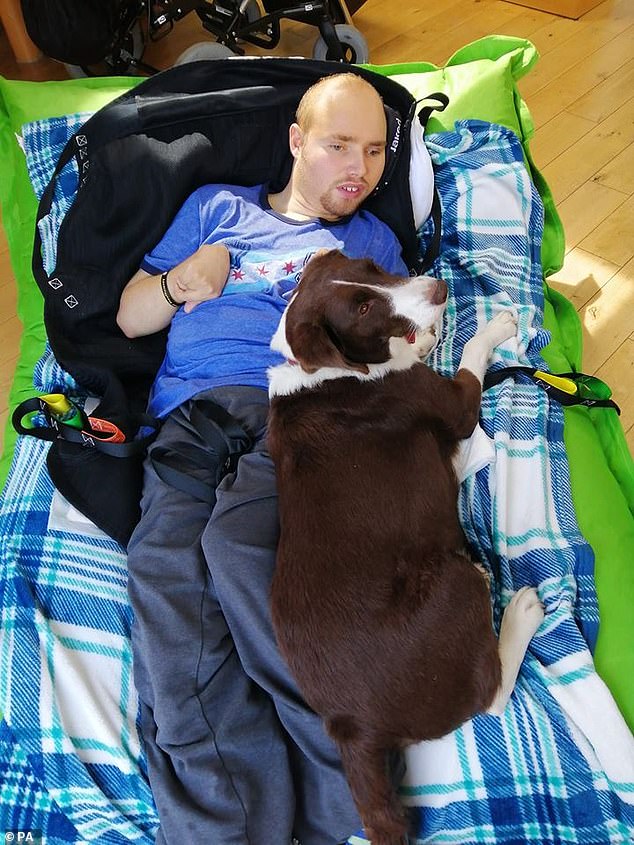 In March, Karen contacted the NHS to ask about personal protective equipment (PPE) for the carers but the family were told they’d have to pay themselves

‘I was assuming that because they looked after him, they fund his care – and in my mind, they have a duty of care to Cameron and his carers – I kind of expected they were going to somehow deliver me some PPE.

Personal Protective Equipment (or PPE) is being used by NHS staff caring for patients who tested positive for coronavirus.

These can include plastic visors, medical masks, gloves and protective gowns.

PPE has been in severely short supply for many hospitals across the UK, despite the government insisting they had 1 billion items of PPE shipped to the UK from abroad.

Some medical staff have been forced to make their own visors, masks and gowns, with many local businesses also offering to mark and ship products to hospitals

‘They said they weren’t delivering and gave me the Government website which kind of explained what PPE was, but it was more for people in care homes or care agencies.’

She added: ‘I just feel like we’ve been completely forgotten about, we’re a group of people who are just being left to muddle through.

Karen was able to buy a limited supply of masks online, but said they were difficult to find and often an ‘astronomical’ price.

She said: ‘The budget is not an unlimited pot. We don’t know how long this is going to go on for, but that all eats into his budget for care.

‘For about six boxes of gloves and about 100 masks that still comes to £200 and that was just on a website online – I don’t know what the quality is.’ 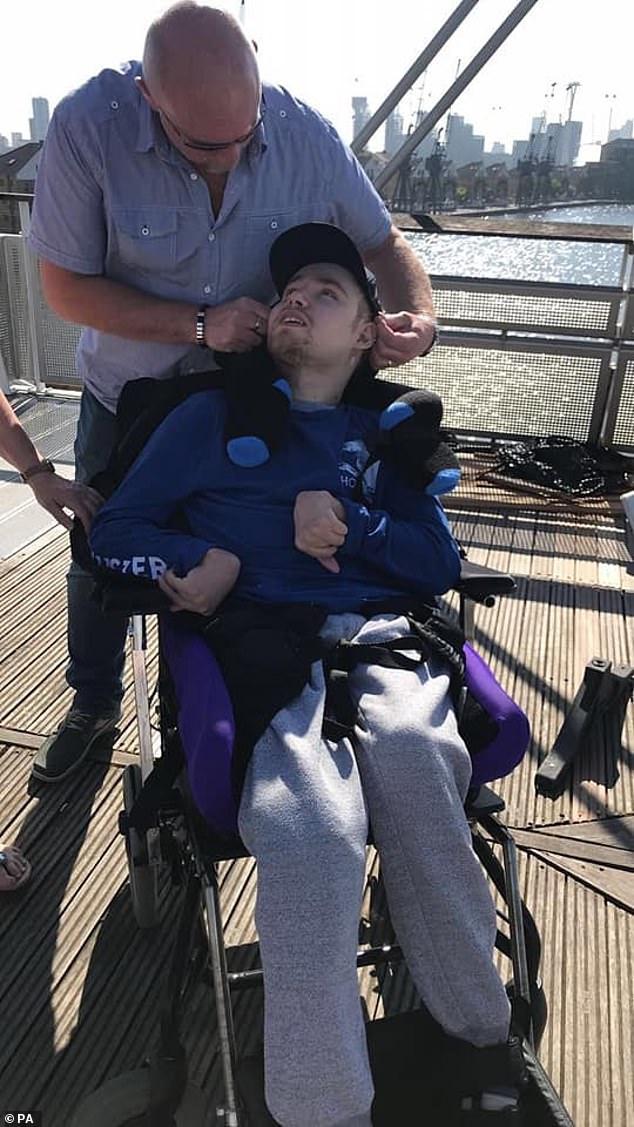 Mrs Harrison was able to buy a limited supply of masks online, but said they were difficult to find and often an ‘astronomical’ price

Cameron’s carers are now using the masks sparingly, but Karen said she had been given no guidance and that said the advice on if carers should wear PPE and when was a ‘minefield’.

She added: ‘If Cameron was to become very poorly and needed ventilation that would be a very difficult conversation with the doctors as to whether they would deem it correct to ventilate him. It would be a horrendous time.’

Genetic Alliance UK, a charity which supports those affected by genetic conditions, has called on the Government to ensure that all people cared for at home and their carers are properly protected, and that family members are given appropriate advice without being asked to source their own equipment.