It’s a green and white art deco cupboard just sitting in a nook on a suburban footpath – but it has become a nexus for community connection.

Karan White’s idea was a simple welcoming gesture. She moved to Hawthorn East recently, arriving days before a lockdown. Last week she started a small community pantry for neighbours to exchange excess produce. 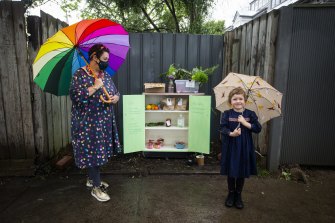 People stroll by to contribute or take something, she said, they chat to neighbours and then pop back again the next day to see what’s new and what’s changed.

Locals of all ages visit. Through the pantry, Mrs White has become friendly with an elderly neighbour, Pat, over a shared love of plants and gardening.

Children, like four-year-old Frankie Gavin, have also made it their own, contributing playdough – lovingly packaged in jars with hand-drawn labels – posies, brownies and lemons to its shelves. 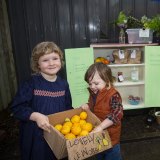 Frankie and Arlo get into the spirit of giving.Credit:Paul Jeffers

Pearl Tulloh, Frankie’s mother, said they were using it as an opportunity to teach about “the joy of giving especially when a lot of people are doing it tough”.

COVID restrictions have been the catalyst for a new bond between neighbours. It’s a familiar story replicated in apartment buildings, streets and suburbs across Melbourne.

Everybody needs good neighbours. Particularly in lockdown, when the people living nearby have become a much-needed source of human connection and social interaction, whether that’s pet-sitting, produce sharing or simply stopping for a chat.

William Reid first met his neighbours as they headed to the park with their ragdoll kitten on a leash.

The kitten, Marshall, was the starting point for “one of those awkward COVID chats from about three or four metres away from each other”, he said.

The chance encounter revealed they all lived on the same floor of their North Melbourne apartment building. It wasn’t long before Mr Reid and his partner Nikka were looking after Marshall when his owners, Jade and Becci, worked long shifts at the Royal Children’s Hospital.

In normal times, “I might have been rushing out the door”, Mr Reid said. Instead, the lockdown “gives you pause to slow down and enjoy those interactions. And I think because of that, we’ve probably struck up a friendship that we might not otherwise.”

Dr Michelle Lim, a senior lecturer in clinical psychology at Swinburne University, said many have discovered the role of neighbourhoods in combatting loneliness when lockdowns restricted their movement.

“The importance of community really came in when we were restricted in where we could go,” she said.

Dr Lim, the chair of national initiative Ending Loneliness Together, said a recent study she co-authored across Australia, the US and the UK showed people who completed acts of kindness for others reported lower levels of loneliness.

“When we look at what people were nominating (as their act of kindness), it was really emotional support,” she said. “It didn’t cost them anything, and most people were doing it two and a half times on average within a month.

“In the US, they reported not just lower loneliness, but less social isolation … and in Australia, it was less stress. So, it’s really interesting how all the countries were responding differently.”

Meanwhile, in Pennydale, a small pocket of Cheltenham, Oliver Neilson and his wife have been offering pizzas – hot out of the oven – to those living nearby.

Last Sunday the couple made around 30 pizzas and gave away most. “We saw a few familiar faces, and then we also get to meet some new faces as well,” he said. Some neighbours even met one another on their way to pick up pizza, and became friends.

Two toppings were on offer. One, a classic Margarita, the other topped with caramelised onions, heirloom tomatoes, mozzarella cheese and Italian pork and fennel sausage from the local butcher.

Mr Neilson said he wants to show his daughter that “it is not difficult to do good things and to be good.”

Melbourne journalist Lucie Morris-Marr lives locally with her family and shared a picture of the pizza cooks on social media.

“Everyone, everywhere is struggling with this whole thing. And then I think, people are still prepared to go to that effort – during lockdown – that makes you go, gosh, what a community!”

When restrictions ease, and people can gather, Mr Neilson said he plans on making pizzas again. He hopes neighbours will be able to bring a bottle, eat their pizzas together and talk.