The number of fires in homes and buildings fell to the lowest level in years during the coronavirus pandemic in NSW and Victoria, while the past two years have seen a spike in storms and floods as a La Niña weather system brings heavy rain to the eastern seaboard.

The Productivity Commission’s Report on Government Services, published on Friday, shows the number of accidental residential fires per 100,000 households fell significantly during the financial year 2020-21 in NSW and Victoria, where lockdowns and COVID-19 restrictions bit hardest for longest. 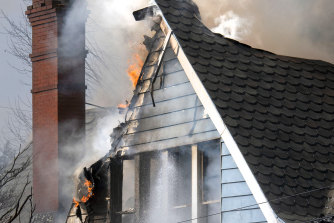 House fires fell over the past two years. Credit:David Crigger/AP

More than fifty Australians die each year from residential fires, according to research from the Bushfire and Natural Hazards Co-operative Research Centre.

“They are a significant form of preventable death in Australia. Our research showed there were 900 fatalities between 2003 and 2017, which equated to a Black Saturday bushfire event every three years,” Mr Gissing said.

Making false reports to emergency services, either to accuse someone of a crime or erroneously report an emergency, can result in big fines or up to three-year jail sentences.

Despite an extended decline in road traffic in the first stages of the pandemic, the number of crashes attended by emergency services remained about the same for the past 24 months.

Wild weather has tested emergency services in eastern states over the past two years, after an intense drought began to ease in 2019 with the onset of a La Niña weather cycle that brings higher than average rainfall and an increased risk of cyclones.

A report last week from Deloitte Access Economics, which analysed the economic cost of natural disasters, such as floods, fires, coastal damage, heatwaves and other catastrophes, found almost all public expenditure on natural disasters in Australia went on the recovery phase, with just 3 per cent invested in preparation and mitigation.

That research, commissioned by Andrew Forrest’s philanthropic Minderoo Foundation, estimated natural disasters had cost $120 billion over the past 50 years but, with escalating impacts from global warming, that bill is expected to hit $150 billion over the next decade and keep rising to $1 trillion by 2050 under business as usual.

It showed more investment to prepare for natural disasters, combined with action to reduce greenhouse gas emissions, can save $380 billion in gross domestic product over the next 30 years.