Finally our freckles are fashionable! They used to hate their complexions, but now these four women are part of a beauty revolution

Each of these four women is naturally beautiful. Yet they have all spent years caking on make-up — and, disturbingly, even bleaching their skin — in an attempt to change their appearance. Why? Because they all have freckles.

On the whole, the beauty world hasn’t embraced freckles and, for years, it’s been rare to spot one on a famous face. Freckled celebrities have long covered them with heavy cosmetics and ordinary women have followed suit, trying to make their skin similarly ‘flawless’.

Slowly, however, that attitude is changing — thanks to a movement in the beauty industry which aims to embrace natural beauty, instead of conforming to the Hollywood mould.

As a result, more stars are proudly flashing their freckles, which are now seen as distinctive and different — in a good way. 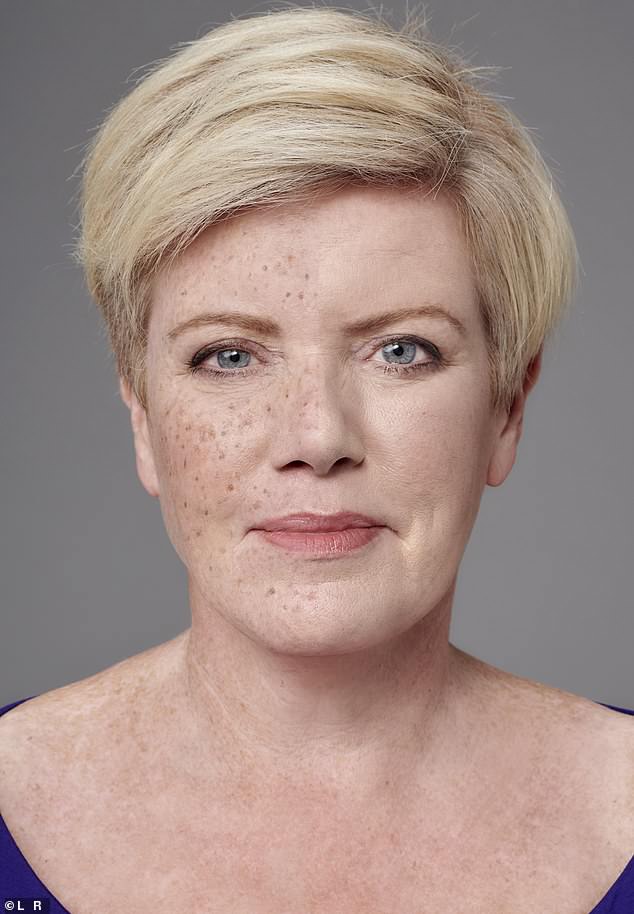 Alice Smellie spoke to four women who’ve struggled to embrace their freckles. Jo Howell, 49, (pictured with make-up on the right side of her face) from Staffordshire was ridiculed for having freckles and red hair throughout school

When Meghan Markle married Prince Harry back in May, she made a point of wearing only light make-up that let her natural freckles shine through. This week, she showed them off again on her first solo appointment, at London’s Royal Academy.

The Duchess of Sussex has revealed in an interview: ‘My pet peeve is when my skin tone is changed and my freckles are airbrushed out of a photo shoot.

‘For all my freckle-faced friends out there, I will share with you something my dad told me when I was younger: “A face without freckles is a night without stars.” ’

And so they should. After all, freckles — or ephelides, to give them their medical name — are not blemishes or sun damage, but natural, pigmented areas caused by a recessive gene that makes skin cells produce lots of melanin.

‘I welcome the return of freckles,’ says Dr Alexis Granite, a consultant dermatologist at the Cadogan Clinic in London.

‘It’s the other end of the spectrum from the incredibly “done” look sported by the likes of Kim Kardashian and is perhaps a backlash to that airbrushed aesthetic.’

So, after decades of hiding — and hating — their freckles, have these women learned to embrace them at long last?

CANCER HELPED ME LOVE MY OWN SKIN

I’m pleased to see Meghan going more bare-faced — it’s refreshing to see a celebrity who doesn’t cover up her freckles and look ‘plastic’ the whole time. I think hers look very cute and endearing. 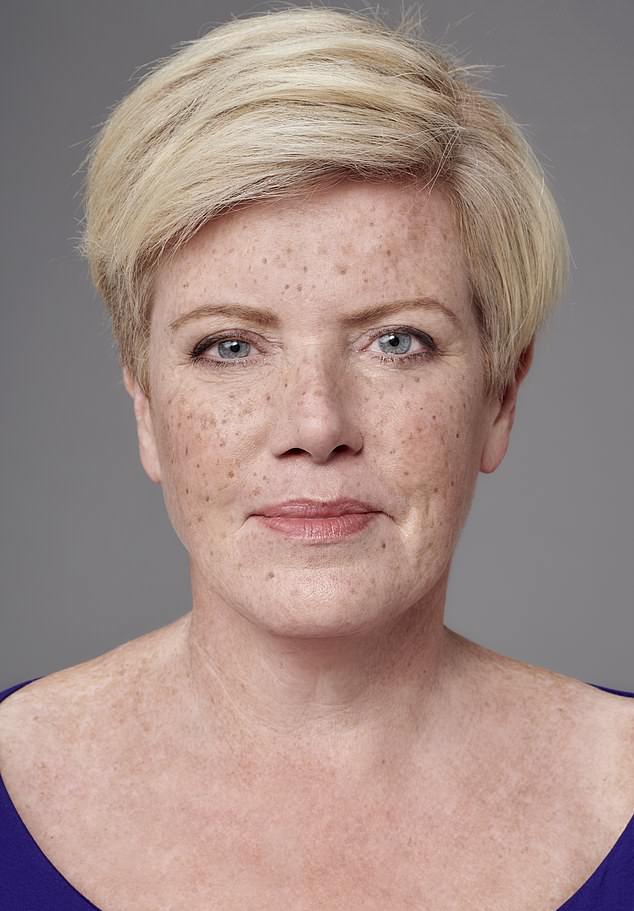 At school, I was ridiculed for my red hair and freckles and it always stuck with me that they were unattractive and odd. I was called everything from ‘Freckles’ to ‘Spotty Ginger Nut’.

Things actually got worse when I left school and went to live in the Balearic Islands for a few years, where I was working in the travel industry. I was teased relentlessly for my freckles and red hair, which were very unusual there. It was such a knock to my confidence.

And yet, in the past few years, I have come to love my freckles.

Yes, it’s partly because people are increasingly recognising that they are attractive, but mostly because I’ve realised how pointless it is to worry about such a harmless feature.

Six years ago, I was diagnosed with skin cancer. Having two major operations — and recovering — has made me feel deeply grateful just to be healthy.

Now I absolutely love my freckles and, seeing the pictures of myself with make-up and without make-up, I can’t imagine having a different skin tone or going back to the days when I covered them up relentlessly.

Jess Jones, 29, is a recruitment manager. She and her husband have two daughters, Sophia, six, and Isabella, six months. 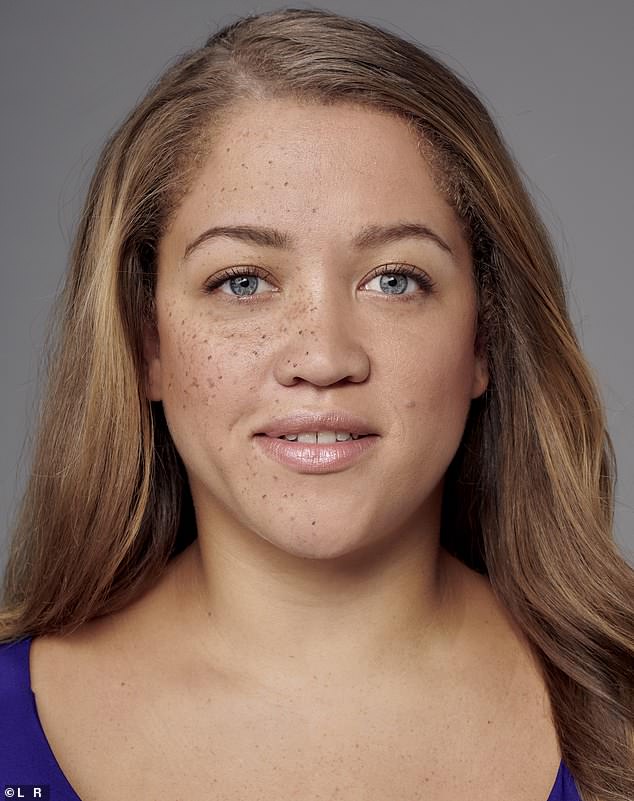 Jess Jones, 29, (pictured with make-up on the right side of her face) spent her teen years covering up her freckles to have skin as clear as the models in women’s magazines

I love both the pictures of me. My skin looks so bright in the freckled one, which is great.

My father is English and my mother Caribbean, so I grew up feeling that no one else looked like me. The freckles dotted over my nose and cheeks added to the sense that I was different.

Look at any women’s magazine and all the models tend to have clear skin. So I spent my teens covered in make-up and wanting to change the way I looked.

It got easier in my 20s as my confidence grew — but still, I always covered my freckles with heavy foundation.

Now, it’s amazing to see women like the Duchess of Sussex who not only have freckles, but are of mixed heritage, too. I’m thrilled to see women who look like me being celebrated.

Another major turning point for me was when I became pregnant with Sophia, my elder daughter. 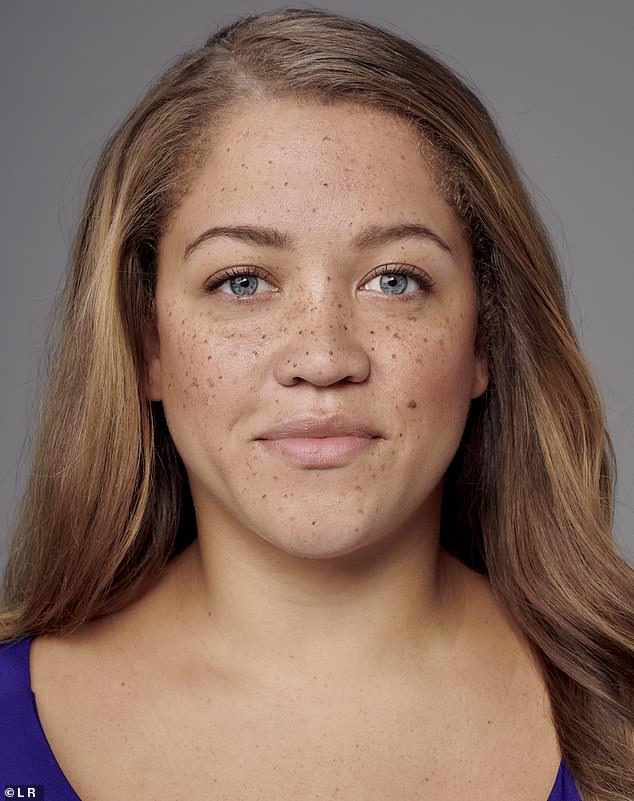 I didn’t want to pass on to her any of my insecurities, so I knew I needed to come to terms with the things I didn’t like about myself, freckles included.

In an attempt to feel more comfortable in my own skin, I even stopped wearing make- up altogether. Funnily enough, the less make-up I wore, the more people commented on how much they liked my freckles, and now I appreciate them as a part of myself.

My husband loves them, too, and says that they are even more beautiful when I’ve been in the sun, which makes them more obvious.

Sophia looks just like my husband and doesn’t have any freckles. Isabella, my baby, looks more like me, so she may inherit them, although she’s too little to have any yet.

I hope I’m better equipped to tell her how naturally beautiful she is, with freckles or without.

I LONGED TO HAVE A BLEMISH-FREE FACE

Natasha Moore, 21, works in marketing and lives in West Sussex. 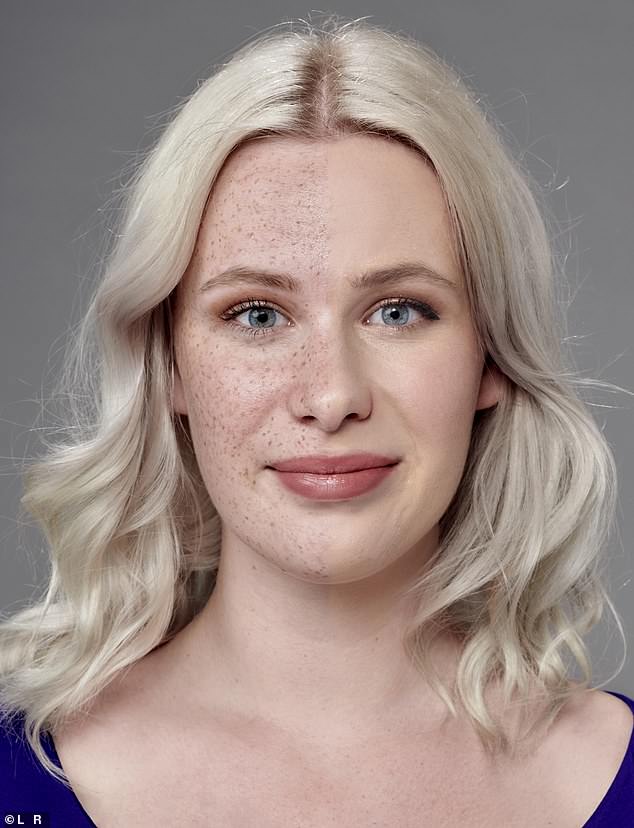 Natasha Moore, 21, (pictured with make-up on the right side of her face) from West Sussex wished her skin resembled models for spot treatments during her teenage years

I always wear make-up to go out and I certainly wouldn’t say I love my freckles. Still, when I saw the two pictures of myself, with and without make-up, I was shocked to find that I preferred myself without, because I look far younger. It was quite nice to realise that!

I think it’s great that freckles are in fashion and, hopefully, we’ll all start to accept that you don’t have to fit in with the ‘airbrushed’ look to be attractive.

That’s certainly how I used to feel. Throughout my teenage years, I’d watch adverts avidly for spot treatments — I didn’t need the products because I didn’t have spots, but I would stare and stare at the models’ clear, smooth skin, wishing that mine looked the same.

Of course, in retrospect, I know they were probably all photoshopped, but it made me strongly associate beauty with clear skin.

I saw my freckles as blemishes and, between the ages of 13 and 18, I didn’t go one day without thick make-up. 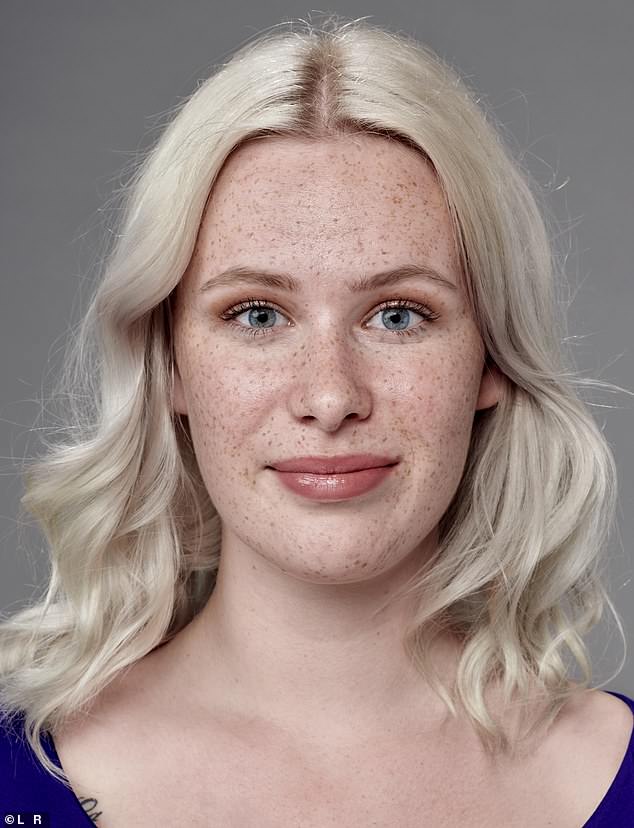 Even my friends took me aside and begged me to wear less. Looking back, it wasn’t the most flattering look!

Thankfully, I wasn’t ever teased, but my skin made me very unhappy and self-conscious.

My mother, who has freckles all over her body, always reassured me that I was being ridiculous and I looked beautiful. Maybe it’s time to accept that she was right.

AGED TEN, I TRIED TO BLEACH MY FRECKLES

Model Debi Ireland, 56, lives in Woking, Surrey. She has three children and is engaged. 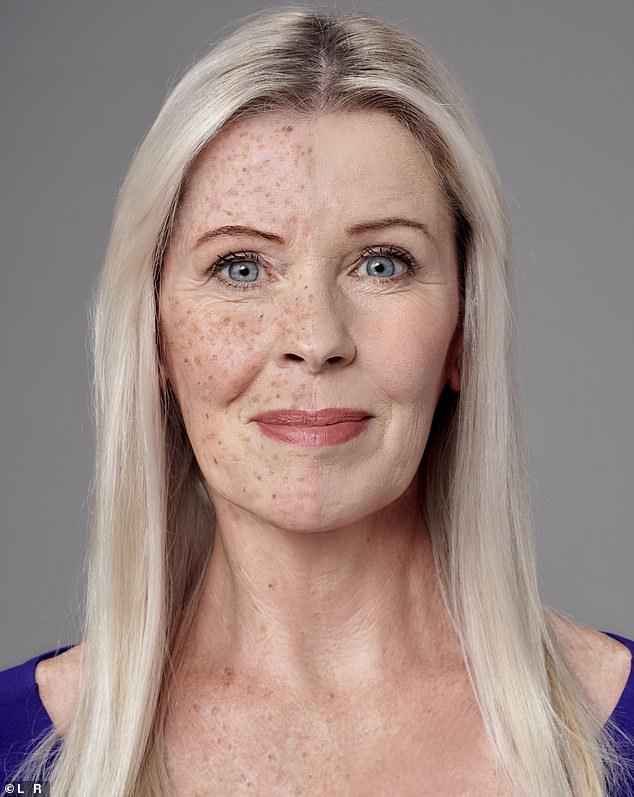 Debi Ireland, 56, (pictured with make-up on the right side of her face) was a target for bullies during her childhood and attempted to bleach her freckles away

As a child, I loathed my freckles, which made me a target for bullies at school.

One day, aged ten, I was so desperate to get rid of them that I filled up the bath with water and poured in some bleach.

I soaked in it, then used a harsh bathroom cleaner on a Brillo Pad to try to scrub off my freckles.

My skin became terribly sore and inflamed and I went to bed in tears.

The next day, my PE teacher asked me about my skin. I broke down and told her what I’d done.

Everyone was very sympathetic — but I was left in no doubt how very dangerous it had been.

I still hated my freckles and continued to cover them with make-up throughout my 20s and 30s.

I had to absolutely cake it on to fully hide them. 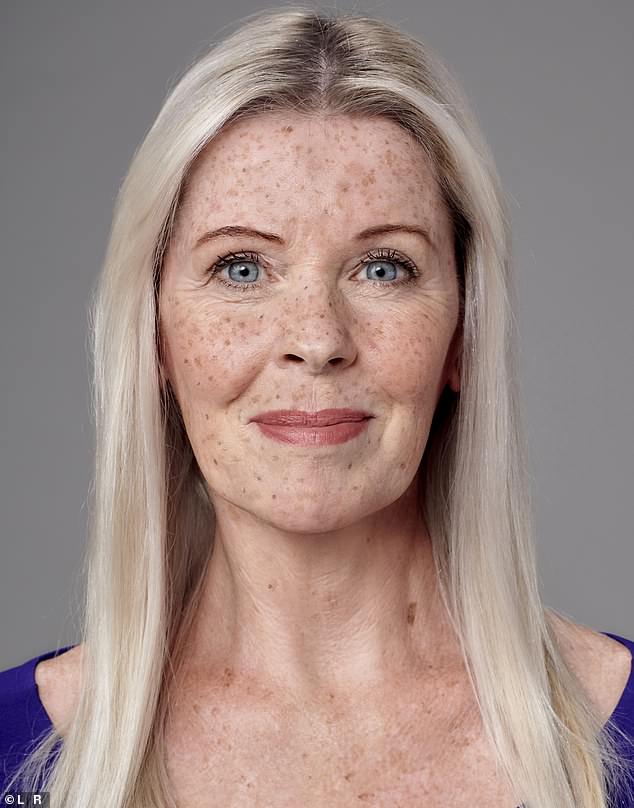 It was only when I reached my 40s that I started to relax about my skin, realising that looks aren’t the be-all and end-all.

Now, in my 50s, I’m the most content I’ve ever been. Funnily enough, I even started modelling four years ago and I’ve found that make-up artists tend not to completely cover my freckles.

Still, I wouldn’t say that freckles are a ‘fashion statement’ or a fad. Better, I think, to celebrate them all the time.

They are a part of my identity and, although I feel sad for the unhappy child I once was, now I wouldn’t change my scattering of distinctive freckles for anything.

Seeing the pictures of myself just confirms that for me. My freckles are finally here to stay.

JEALOUS? HERE’S HOW YOU CAN FAKE THEM 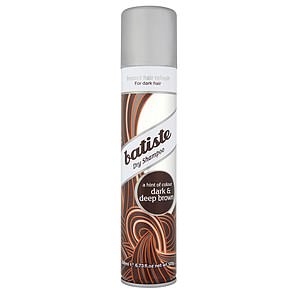 This  may take time to finesse, but a dark dry shampoo can give perfect freckles.

Close your eyes and press the nozzle half way, so the product comes out in tiny amounts, then spritz droplets over your nose. 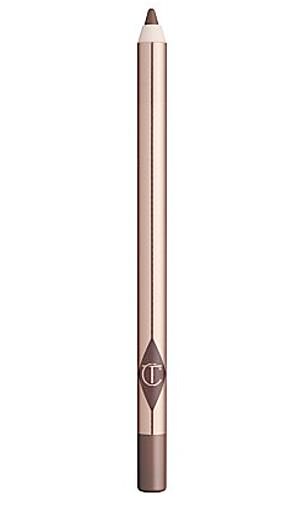 Use Charlotte Tilbury’s Lip Cheat in Foxy Brown to draw on tiny freckles. 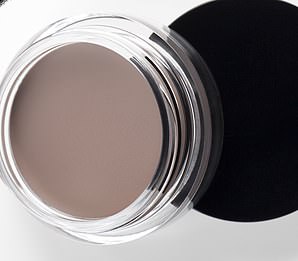 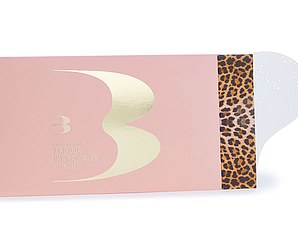