The Finance Department has not confirmed whether it knew Assistant Treasurer Michael Sukkar was a former senior associate for Ashurst before outsourcing a federal inquiry into his office to the law firm.

Department of Finance secretary Rosemary Huxtable told Senate estimates on Thursday she did not believe there was a conflict nor a "perception" of one arising from the use of the law firm for which the minister previously worked. 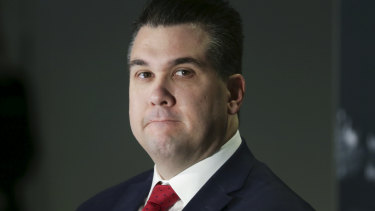 Officials took questions on notice about whether the department was aware of his links to the firm ahead of time and how many law firms could have been selected.

"We have requirements on those who come forward for this work that they assure themselves, and Ashurst has noted since and publicly that they went through those processes to identify conflicts and they signed off on there being no conflicts," Ms Huxtable said.

The Finance Department selected Ashurst, at which Mr Sukkar worked for seven years until 2013 under its previous name Blake Dawson Waldron, following revelations in this masthead in August that taxpayer-funded officers may have been engaging in political activity.

The law firm found there was "not a sufficient basis" to form a view there had been a misuse of money, resources or work expenses, in a review handed to the department this month.

Ashurst previously told this masthead all law firms had to undertake "appropriate conflict of interest identification and disclosure processes", while the department said the law firm's reviewer did not have any prior dealings with Mr Sukkar.

Separately, the Independent Parliamentary Expenses Authority said it had started its own assessment of Mr Sukkar's work expenses. IPEA only has jurisdiction over this component, which relates to printing and communications budgets, and has the power to take action without matters being referred to it.

"We're doing everything consistent with our protocols," IPEA chief executive Annwyn Godwin said at Senate estimates on Thursday afternoon. She said the authority's review was in the early stages as it had chosen to wait until the Finance Department investigation was complete.

"We've accepted that as part of our preliminary assessment and this is one of a number of matters we are looking at."

The most important news, analysis and insights delivered to your inbox at the start and end of each day. Sign up to The Sydney Morning Herald’s newsletter here and The Age’s newsletter here.