The five biggest mistakes men are making on dating sites 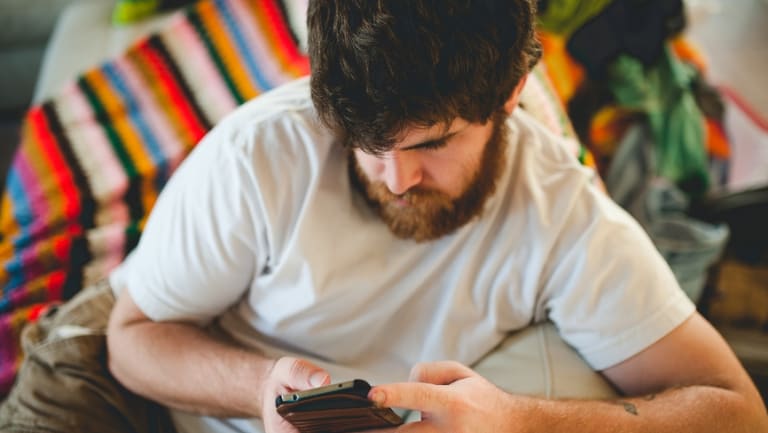 There’s no way you’d say that in real life, buddy.

A friend of mine recently burst through my front door and declared he was having a crisis – love was a false concept, Tinder was rigged and he was destined to die alone. Before I even had the chance to say “how did you know I was home?” he flopped onto the lounge and continued the world’s saddest monologue.

“Seriously man, everyone told me to get on Tinder, so I did. I chose the photos, wrote the witty profile, but now it’s been months and…nothing.”

I nodded in agreement. I’d had daily text updates about his Tinder-failures, each one written like a breaking news bulletin for the broken-hearted.

“THIS JUST IN: Chat with red-headed Sandra Sully lookalike has stalled despite the fact she was keen as yesterday. So weird, honestly doing my head in.”

I felt for him and was a bit surprised that he appeared to be misfiring more than he was matching. He was a good guy, with strong banter, a great jawline and a fun job (something about tech startups…I don’t know, he plays a lot of ping pong). Anyway, it was all there.

I’ve seen him in action with the opposite sex and he’s comfortable, charismatic, magnetic even. So what was happening when he fired up his Tinder app?

As he solemnly handed his phone over, I began a forensic investigation into his account and it didn’t take long for his rookie errors to reveal themselves. It appeared his Tinder tactics were far removed from how he flirted in the flesh, a real Jekyll and Hyde situation.

“I’d hit you with a cheesy pickup line but your bio says you’re lactose intolerant.”

That’s an actual thing this friend of mine said to a girl on Tinder. Day to day he’s a normal human man, who can chat to people, but when it comes to digital dating he turns into the worse version of himself. Now I love cheese as much as the next person, but that is just inexcusable. He wouldn’t’ be caught dead saying these words out loud, so why type them?

One size fits all approach

Imagine walking into a bar, strolling up to every person inside and saying the same thing to all of them…then expecting one of those people to fall in love with you? A quick look through his inbox proved my friend had taken the copy and paste approach to courting on Tinder. Worst still his line of choice was…

“So you decided to swipe right, best decision you’ve made all night.”

Oh wow, a rhyming couplet – take me now! Outside of the fact, this is cringe-worthy (maybe even worse than the cheese line); it’s also lazy, at best and insulting, at worst. Put a little effort in.

Shoehorning sex into every chat

I believe it was famous philosophers, Salt N Pepa, who once wrote: “let’s talk about sex baby.” And while they were certainly onto something, talking about sex isn’t the only way to stimulate conversation. As I mentioned earlier, I’ve seen my friend talking to strangers in bars and he’s like a young Andrew Denton – inquisitive, interested, bespectacled. But his Tinder talk was dotted with heavy-handed innuendo that reeked of high school. I had to press him on this one.

ME: Why are you trying so hard (scuse the pun), to work sex into every chat? It’s weird man.

HIM: It’s weird, I agree, but because you don’t know each other, you tend to joke around a lot. And then depending on the two people, joking in that Tinder context can lead to being suggestive. And before you know it you’re saying things you wouldn’t say. And it goes both ways.

I knew what he meant and looking at his chat history, it was even – for every peach emoji, there was an eggplant to match it. But still, replying to every second message with a wink makes it seem like you have a one-track mind.

Pretending to have lots of hobbies

Dating often involves a lot of pretending. You pretend to like a certain band, food or film in order to make the other person feel comfortable. Half the time both parties are pretending, not really sure what the other person is thinking.

That’s what leads couples to hire those floating pedal boats in parks – one honest conversation could’ve saved a whole afternoon of fake fun.

My point is pretending is OK – sometimes – but my pals’ Tinder was a hotbed of hobby lies.

According to his bio, he’s into horse riding, origami, making his own sushi, and military history. His theory was that the more you’re into, the more chance someone else is into that too. But while having things in common is good, sometimes people will like you for what you aren’t. It’s also a short-sighted theory because when you finally do meet face to face and your date expects you to whip up a California Roll, you’re in deep trouble.

This was perhaps the hardest one for my friend to hear because no one wants to be told they’re a loiterer. In the real world, I’ve seen him get shut down and do the normal thing – walk away politely. This is because loitering is weird and there are literally signs on the street that tell you not to do it. But some kind of disconnect occurs on Tinder, which tells him it’s OK to keep pursuing someone who is clearly not interested. If the chat has gone cold and it’s been more than a couple of weeks, chalk it up as a loss and move on.

Avoid these five mistakes and you’re destined not to die alone. Or don’t and my door is always open – I really need to get that fixed.