PANAMA CITY, Fla. — It’s been more than five weeks since Hurricane Michael slammed into the Florida Panhandle with winds topping 150 miles per hour and a massive surge of sea water. In the hardest hit areas, there were few signs of recovery and some are still living under tarps.

Block after block, giant piles of debris are rotting on the sidewalks in Panama City and officials say it might not be cleared until the end of the year.

After the storm, 20-year-old Arieynna Nichols went from living in an apartment to staying in shelters. Nichols suffers from a chronic condition that keeps her in a wheelchair.

“My daughter had her first tee-ball game five days before the hurricane hit. I mean, we were living normal lives,” she said. 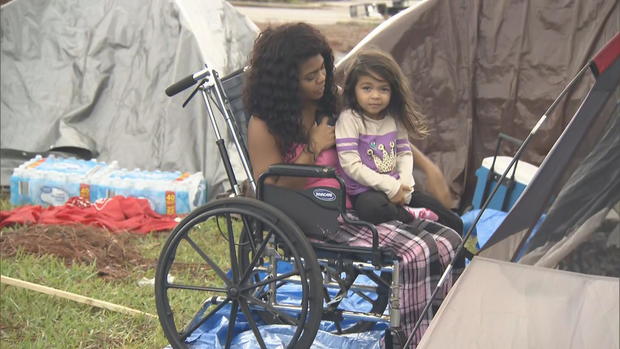 Arieynna Nichols and her daughter have been living in a tent after Hurricane Michael hit.

For the last few days, she’s been sleeping in a tent city with her 4-year-old daughter and more than 100 other hurricane survivors.

More than 95,000 people in the disaster zone have asked the Federal Emergency Management Agency (FEMA) for help. So far, just over 25,000 have been approved for housing assistance.

A FEMA official told CBS News other applicants are waiting for insurance claims to be processed before they’re approved for federal help. FEMA said the first mobile housing unit should arrive next week.

“We need help,” he said. “We were not planning on a catastrophic event that was going to absolutely carpet bomb this area and it happened.” 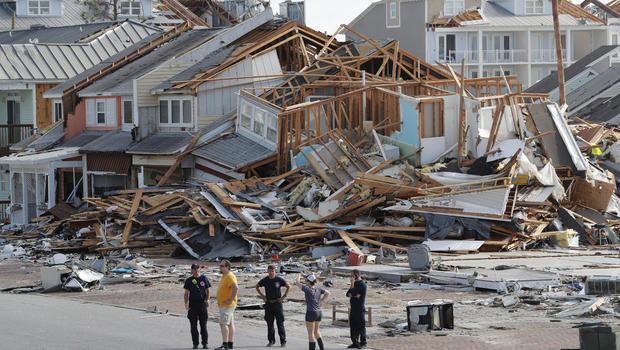 Hurricane Michael slammed ashore as a Category 4, the strongest ever to hit the Florida Panhandle