Foreign Minister Marise Payne and Defence Minister Peter Dutton will explore new trade opportunities with India and Indonesia on a whirlwind visit to four different countries through the Indo-Pacific region over the next week.

China’s growing assertiveness in the South China Sea, including its new law forcing foreign vessels to submit to Chinese supervision in its “territorial waters”, will also be on the agenda. 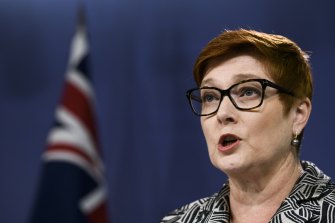 Senator Payne and Mr Dutton will travel to Jakarta on Thursday for talks with their two Indonesian counterparts before talks in India on Saturday. After stopping off in one other country, they will then travel to Washington for the annual Australia–US Ministerial talks with Secretary of State Tony Blinken and Defence Secretary Lloyd Austin.

The prospect of a free trade deal with India will be discussed at the meeting in New Delhi after the country’s top diplomat this week said there was a “tailwind” behind the negotiations.

The two countries have tried to ink a trade deal in the past but India’s comparatively high tariffs, especially on agricultural products, have always proved to be a sticking point.

Trade Minister Dan Tehan last month revealed India’s Commerce Minister Piyush Goyal had agreed to resume negotiations and he had dispatched Tony Abbott to New Delhi to kickstart the discussions. During his time as prime minister, Mr Abbott had a close relationship with his Indian counterpart Narendra Modi.

Mr Tehan said on Tuesday his government was “working to further enhance and strengthen Australia’s relationship with India” and there was “significant opportunity to increase trade between our nations, including Australia’s export of resources and other commodities, such as wool”.

“In July, I provided a proposal to Minister Goyal on strengthening the economic relationship and I asked former prime minister the Hon Tony Abbott AC to travel to India to reinforce and follow up on this proposal.

“Both countries are committing additional resources towards progressing our trade relationship and Australia welcomes the positive comments from India about this process. While it is very welcome that both countries want to progress the CECA this year, it will require a serious commitment from both sides to get this done in this timeframe.”

Indian External Affairs Minister Subrahmanyam Jaishankar told the Australian National University’s JG Crawford Oration on Monday night that he had a “real sense that we are progressing this time”.

“There is a tailwind, which we hope will get us past the post.”

He said there was “a sense at our end that this is a very underperforming relationship”, but Prime Minister Narendra Modi was always telling him to “do more with Australia. Find a way of improving this relationship.”

Senator Payne and Mr Dutton will talk with their two Indonesian counterparts about how to get more out of the Comprehensive Strategic Partnership signed between the two countries last year. The agreement signed the two nations up to advancing trade and economic opportunities and cooperating to counter security threats in the region.

They will also talk about how to boost the presence of the “Quad” grouping of countries which includes Australia, the US, India and Japan, the re-emergence of which has angered Beijing. Senator Payne and Mr Dutton will look to talk with the US about how to better counter Beijing’s “grey zone” attacks including the more than $20 billion in trade strikes against Australia over the past 18 months.

The meetings come on the backdrop of China announcing a new law requiring foreign shipping to give notice before entering any waters it claims as its own, including in the South China Sea.