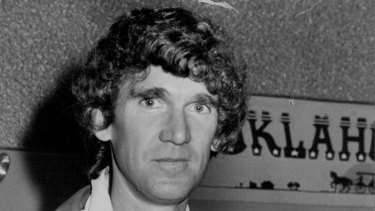 David Williamson, one of the speakers at the Film Makers Forum.Credit:Ross Anthony Willis

Policies of the Federal Government affecting films and live theatre were forcing the arts in Australia back into the 1950s, the leading Australian playwright and screen writer David Williamson said yesterday.

Mr Williamson, referring to the effect of the Government's tax policies on the local film industry and cuts in the budget of the Australia Council, said: "It is all so shortsighted. For a relatively tiny amount of money we can have a country that is artistically alive but at the moment we seem to be heading straight back into the 'fifties.

"I was growing up in the 'fifties and it was a dreadful time. There was no possibility that films could be made, that plays could be written — nothing."

Mr Williamson called for an immediate end to tax legislation which, he said, was damaging the quality of films being made in Australia and inducing investors to put money into American rather than Australian films.

He said section 10B (a) of the Income Tax Assessment Act, which had been designed to boost the local film industry, required films to be finished within a year, and this had led to too many films being produced, including too many bad films.

And a loophole under a different section of the act enabled investors to gain considerable tax concessions from films made overseas. "A quarter of a million dollars reputedly went out of the country into American production houses last year," he said. 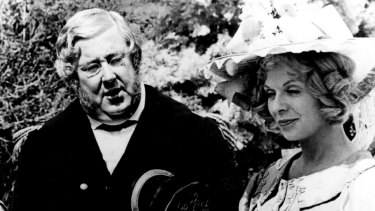 "Partly it’s a time problem. The Government has so many things on its mind at the moment that the last thing it's worried about is the Australian film industry. But we're all desperately worried about it. As Bob Ellis (screenwriter of ‘Newsfront’ and 'Fatty Finn') said recently, after 10 years Australia is lust at the point where it could be making its finest films, and now it might all go down the drain."

Mr Williamson, whose film work has included 'Gallipoli' and 'Eliza Fraser', is in Melbourne to attend the opening of his latest play, 'The Perfectionist', at the Athenaeum Theatre tonight. But he came from Sydney a few days early to watch the Grand Final on Saturday. An avid Collingwood supporter, he said the experience of watching a Grand Final in which Collingswood was not involved was rather more relaxing than usual.

Over the past 10 years, Mr Williamson has been one of Australia's most successful and prolific writers. Asked whether he thought he had now become a "tall poppy', to be knocked off by public and critics alike, he said: "Without wishing to whinge, Australia is a difficult country to be a writer in. Because we have had such a short history of creativity, we are still not as secure as we should be about our own creative efforts.

"There is a sense of insecurity. We disbelieve ourselves and our ability and to some extent I am a victim of that syndrome."

But it was said without complaint, and he gave the impression of a man confident in his own abilities and undismayed by criticism. He believes the days of a writer being regarded with suspicion, as someone who didn't really work for a living, are long gone. "There's not as much distrust that the arts are the realm of poofterdom that I grew up with in the 1950s," he said.

In the past 10 years, however, how much has really changed? In 1972 a longer-haired David Williamson was interviewed after his play ‘The Removalists’ had won an award in England and his film 'Stork' had just been released. One of his main concerns then was the burdens placed on the Australian film industry by tax laws which, he said, greatly favored imported films.

Mr Williamson said that after an exhausting year in which he had worked on two films ('The Year of Living Dangerously’ and 'A Horse Called Phar Lap') as well as the new play, he intended to take a long break. "recharge the batteries", and read a lot of books, before writing again. And when he writes, it will be a play rather than a novel. He was, he said, a lousy novelist. 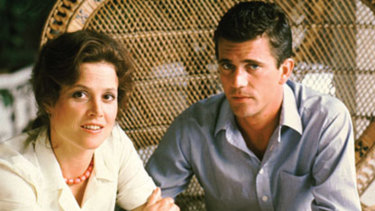 Sigourney Weaver and Mel Gibson in The Year of Living Dangerously (1982). Screenplay by Williamson.Credit:Publicity