Spoilers for GLOW Season 2 Episode 5 ahead. How far are you willing to go to get the thing that you want? It’s the question Ruth (Alison Brie) asks herself throughout GLOW Season 2, most explicitly in Episode 5, when she’s invited to take a meeting with the head of the network that ends up being in his hotel room. To get ahead, it’s clear she’s going to have to put her body on the line in a way that she never imagined. Ruth’s decision in that hotel room ultimately complicates things not only for her, but for the other women on the show. "It’s not just the things that happen to women that they pay for," Rachel Shukert, who wrote the episode, tells me over the phone. "It’s how you pay for the things that don’t happen."

For Ruth, the experience of being propositioned by the network bigwig, who has the power to make or break her career, forces her to think differently about GLOW, about acting, and about the power she and the other Gorgeous Ladies of Wrestling have over their bodies. She ultimately finds herself through a loss of innocence. It’s a fitting storyline for GLOW in the #MeToo era, even if the show is set more than 30 years before the movement started.

From the moment the door to Tom’s room opens, the scene feels all too similar to the ones described in countless allegations against Harvey Weinstein, who was arrested on sexual assault charges last month. (Weinstein has denied all allegations of non-consensual sexual activity.) For the record, Shukert wrote the script for the episode before The New York Times dropped its bombshell report on Weinstein; she says she was inspired by her own experiences and those of other women in Hollywood, who had taken meetings with men in hotel rooms that never felt quite right even if they never went totally wrong.

Ruth isn’t naïve, but she’s certainly idealistic, and doesn’t even think to worry that Tom might want to meet to do anything more than talk to her about her career. This meeting is leverage for Ruth, who feels as if GLOW is slipping through her fingers as she grows further apart from Debbie (Betty Gilpin) and Sam (Mark Maron). The idea that a higher-up is interested in her career development is a much needed confidence boost, a sign that someone actually appreciates what she brings to the show. But, when Ruth arrives and is told to meet Tom Grant in his hotel room, the alarm bells go off.

When Ruth opens the door and sees Glen Klitnick (Andrew Friedman), an executive for K-DTV — but more importantly a familiar face — you can see the relief wash over her, the sense that this may not be what she feared it was. The viewer feels that way too, as they watch her hold court with these men joking about being agent-less over wine before pouring her heart out about why she loves acting. How quickly that sense of safety fades as Ruth finds herself putting the head of the network in an awkwardly suggestive headlock in order to oblige his request to wrestle with her.

"What I really wanted to convey in that scene is the way that you lie to yourself about what might happen, or hope it’s not what you think it is," Shukert says, admitting she knows this from personal experience. "You’re grasping for straws, hoping it all works out, and then it doesn’t and you’re left blaming yourself."

In the end, Ruth flees while he draws a bath, frightened by what he may ask her to do next. But that doesn’t mean Ruth doesn’t have some residual remorse for taking the meeting in the first place. The episode delves into Ruth’s feelings, which could be described as a form of survivor’s guilt, for coming out of this situation relatively unscathed. "Ruth really has the moment of fight or flight and she winds up paying a price for that," Shukert says. "She’s forced to do the emotional labor to bounce back from someone else’s inappropriate behavior and thoughtlessness and sexism." 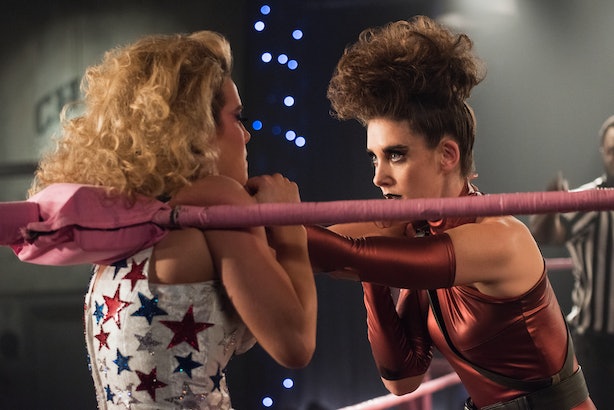 Ruth also has to reckon with Debbie, who doesn’t sympathize with her, but instead chastises her for not appeasing the head of the network. Debbie sees this as part of her job, telling Ruth you have to make powerful men like Tom Grant think you want to sleep with them. "That is how show business works, Ruth," Debbie says. "Men try sh*t and you have to pretend to like it until you don’t have to anymore."

While they both know that’s not fair, Debbie sees it as a means to an end. She’s willing to use her body to get ahead as a woman and as an actor because she sees no other way, convincing herself it’s a Hollywood power move — the only one she has to play in a business run by men. "So much of the show is about that line between empowering and exploitive," Shukert says. "How do we play into our own exploitation? If we’re conscious of it, are we being exploited? How much are we willing to compromise or laugh off or decide it’s OK? Where do we draw the line?"

In Season 2, Ruth draws hers. She’s always felt like Debbie’s underachieving friend, a try-hard who can never get ahead for reasons she doesn’t understand. Following the meeting, she realizes that Debbie’s fame came at a price that she’s not willing to pay. Ruth won’t give up her agency to men who don’t see her potential as anything more than a pretty face. She realizes there’s power in numbers, and Ruth has the women of GLOW. There will be no more meetings in hotel rooms, just long days in the ring, the only place she’ll use her body to get ahead.