For the second year in a row, the Grammy Awards have been pushed back by the coronavirus pandemic.

The 64th annual ceremony, which had been set for January 31 in Los Angeles, will be rescheduled, according to a joint statement Wednesday from the Recording Academy and CBS, as the omicron variant has led to a surge in cases in the United States.

The new date will be announced soon, the statement said, noting, “The health and safety of those in our music community, the live audience and the hundreds of people who work tirelessly to produce our show remains our top priority.”

Last year’s show was postponed by six weeks as cases spiked and before vaccinations were widely available. Last week, Dr Anthony Fauci, President Joe Biden’s chief medical adviser, predicted that the latest wave of the pandemic may reach its peak in the United States by the end of January. 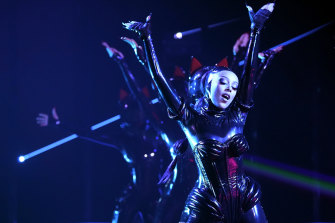 Doja Cat, here performing at the 2021 Grammys, has eight nominations for the 2022 iteration. Credit:Invision

This year, composer and bandleader Jon Batiste has 11 Grammy nominations, more than any other artist, and will compete for album and record of the year. Other top nominees include Olivia Rodrigo, Justin Bieber, Billie Eilish and Doja Cat. There are several Australian musicians and groups nominated including The Kid Laroi, Rufus Du Sol, Hiatus Kaiyote, Nick Cave and AC/DC. No performers have been announced yet.

In November, in an unusual move, the Recording Academy, the organisation behind the awards, made a last-minute change to the nominations procedure. Just 24 hours before the nominations were announced, the group voted to expand the ballot in the top four categories — album, record and song of the year, and best new artist — to 10 spots from eight, a move that benefited Taylor Swift, Kanye West, Lil Nas X and others. Two weeks later, Drake, who was nominated for two Grammys but has long expressed ambivalence about the awards, withdrew from the competition.

This year, the Recording Academy had also scheduled the return of its high-profile annual pre-Grammy events, which take place in the days leading up to the show and feature stars mingling with music executives.

A tribute to Joni Mitchell, benefiting MusiCares, a charity associated with the Grammys that helps musicians in need, was to feature performers like James Taylor, Herbie Hancock, Brandi Carlile and Batiste. Clive Davis, the 89-year-old music executive, also had plans to hold his annual gala the night before the ceremony. The academy’s statement didn’t specify changes in plans for these events.

The main ceremony has been scheduled for the Grammys’ usual home in downtown Los Angeles, which is now called Crypto.com Arena. (It was until late last month called the Staples Center.) Last year, performances and award presentations took place nearby, at the Los Angeles Convention Center, and largely outdoors. That show was hosted by Trevor Noah, who is returning this year.

Reviews of the 2021 event — in which many artists faced each other on a stage built for multiple performances — praised it as a fresh new take. But ratings fell by 53 per cent to 8.8 million, according to Nielsen, a new low for the Grammys.

The Sundance Film Festival, due to begin 11 days on programming on January 20, has also cancelled its ambitious plans for in-person events in Utah. Instead of hosting red carpet premieres, parties and panel discussions in the traditional hub of Park City, the 2022 festival will now be mostly virtual for the second consecutive year, a decision made by festival organisers in the face of the fast-moving omicron.