The Grand Design house that destroyed a marriage: Kevin McCloud returns to extraordinary 10,000sq ft cob house that took seven years to finish – and finds its ‘obsessed’ owner living with his NEW family

Architecture fans are calling the latest episode of Grand Designs, which tracked down the progress of a ‘marmite’ 10,000 sq ft cob house after seven years, the ‘best ever’.

Devon builder Kevin McCabe embarked on a wildly ambitious project to create a 10,000sq ft family home from the all-natural material cob – a mixture of sand, clay, straw, water and earth – in April 2011.

When the original show aired in 2013, the house had been besieged by problems – including bad weather – and was far from completion.

Now, seven years after the idea was first dreamed up, viewers watched as the project finally came to completion, but also learned that the builder’s marriage had crumbled in the process.

Mr McCabe, one of the UK’s leading living exponents of the ancient art of cob building, was determined to show how the method could be brought up to date to produce a luxury home that meets modern building standards. 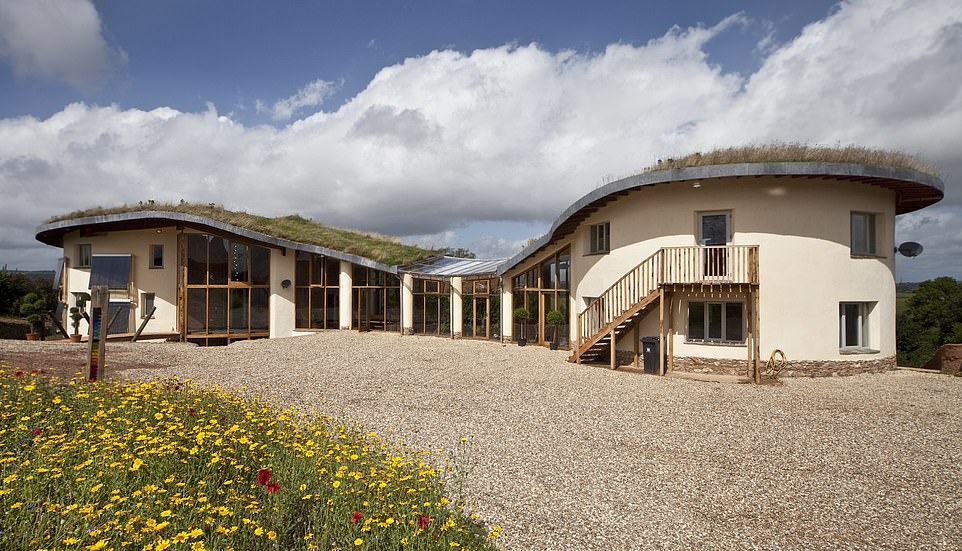 Builder Kevin McCabe embarked on a wildly ambitious project to create a 10,000sq ft family home from cob – an all-natural material made from compacted soil, clay and straw – in April 2011. The property was first featured on Grand Designs in 2013 but is revisited on tonight’s episode, when presenter Kevin McCloud discovers a stunning family home, pictured today 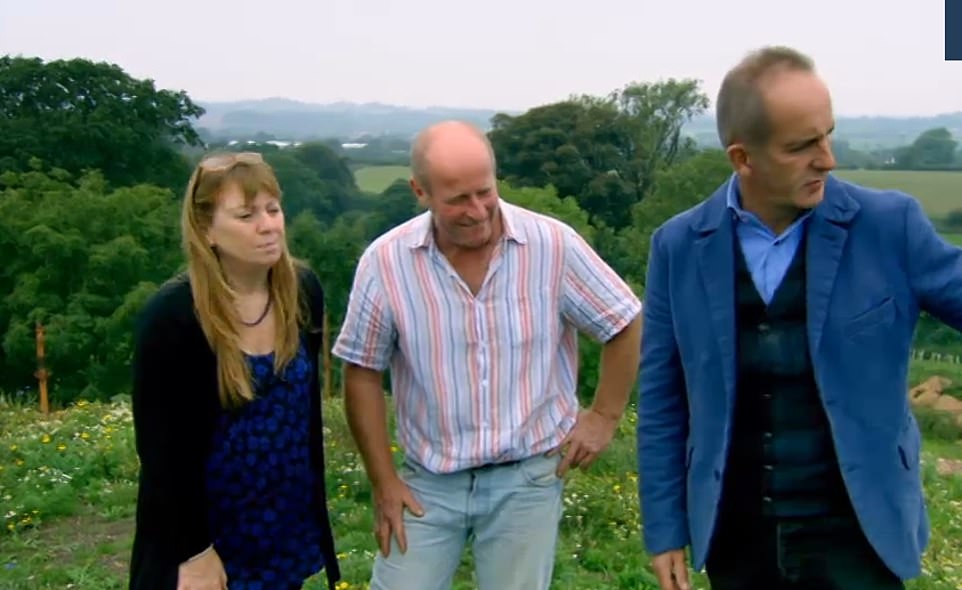 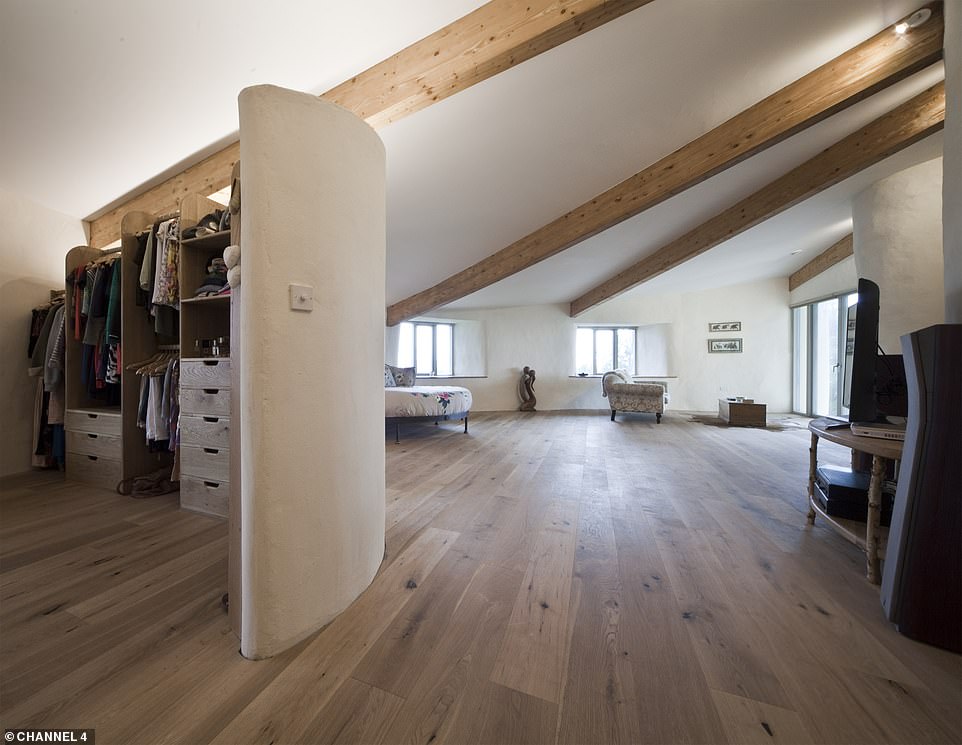 Kevin McCabe, one of the UK’s leading living exponents of the pre-historic art of cob building, was determined to show how the method could be brought up to date to produce a luxury home that meets modern building standards. Pictured, the enormous master suite in the east Devon property, which presenter McCloud compared to a ‘penthouse apartment’ 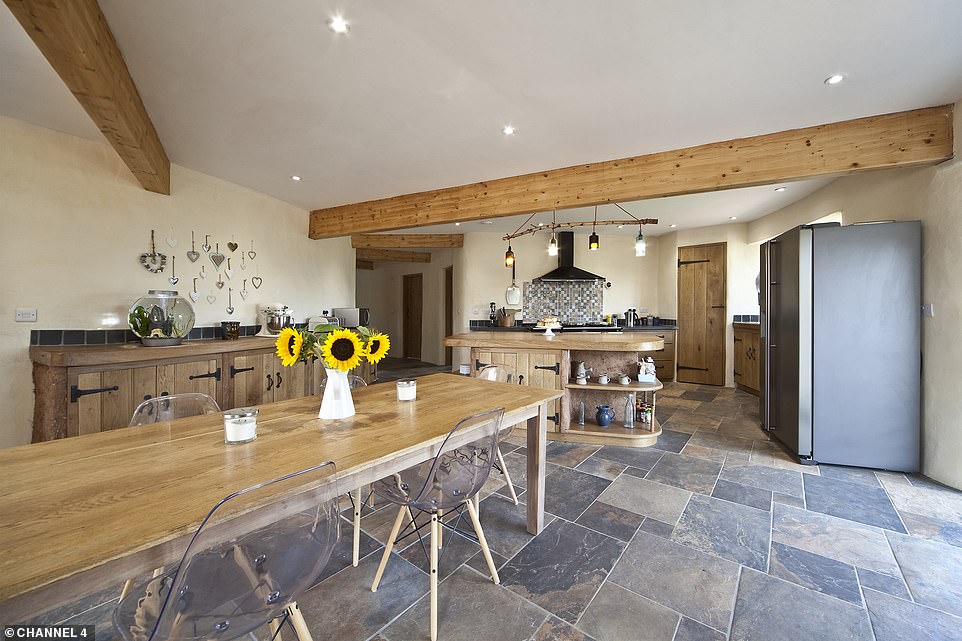 Cob is on show everywhere in the property, from the central circular staircase to the kitchen counter, pictured, and the wood burning fire in the family living room. Builder Kevin McCabe admitted he doesn’t know how much the home has cost to build 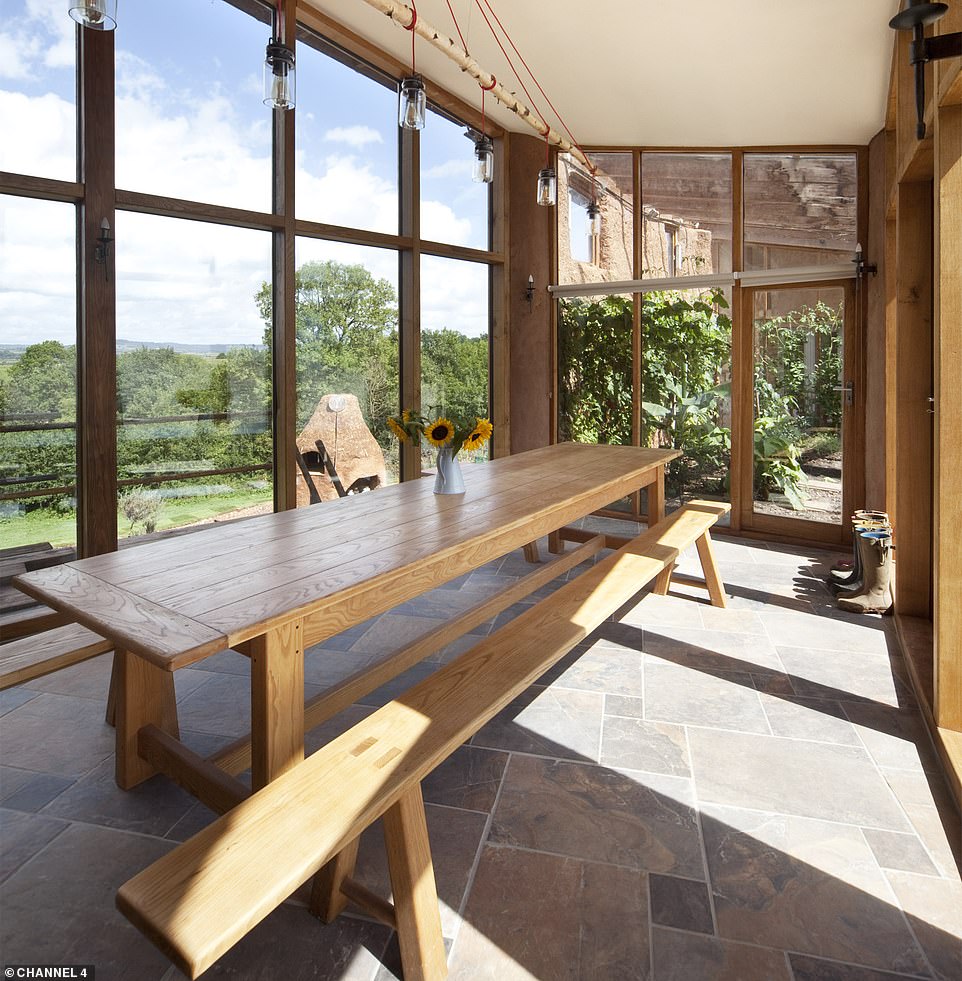 The property takes the shape of two separate cob cylinders, connected by a glass-sided greenhouse walkway. The family dining room, pictured, is also located in the walkway off the large kitchen. The windows offer views of the countryside 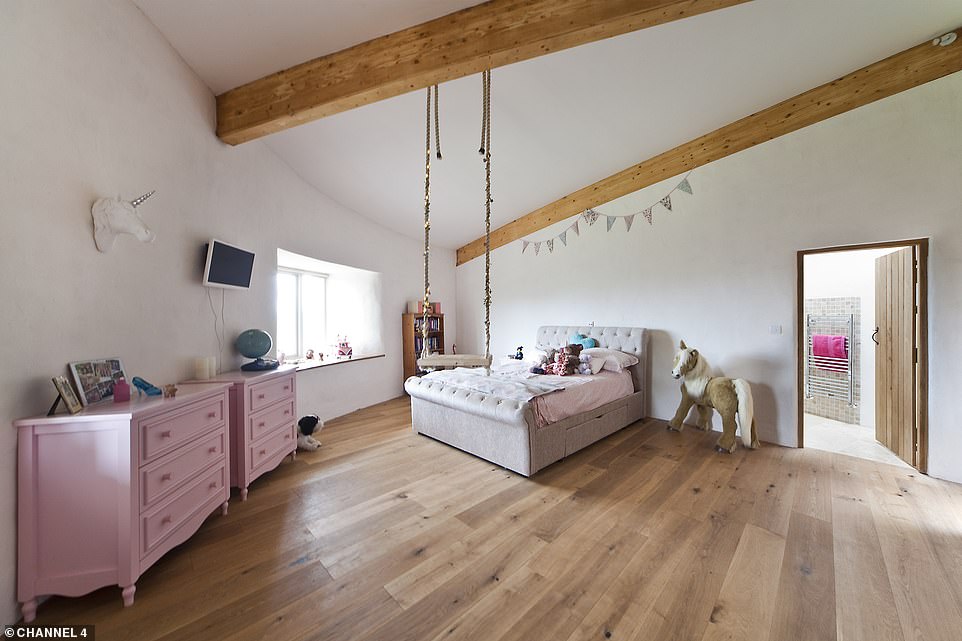 Mr McCabe started building the property with his now ex-wife but currently lives in the home with his partner and her children. Pictured, one of the large bedrooms in the main three-storey cylinder is transformed into a little girl’s dream

Setting aside a £350,000 budget, he anticipated the project, set in the rolling hills of east Devon, would be complete within two years.

On Twitter after the episode aired, many viewers said the show had set a new precedent for best ever episodes, with Kevin McCloud giving the property a huge thumbs up, saying: ‘A splendid building, eh? A bit of a marmite house I suppose.

Actually, a large and a medium marmite jar joined together with a marmite flavoured conservatory. I love marmite.’

Viewers were equally impressed; @Adam61997955 wrote: ‘One of the best grand designs ever’.

@SueMessy added: ‘Absolutely amazing, one of the best builds on Grand Designs EVER! Mind blown.’

@A_G_89 penned: ‘Right, if anyone has just watched what was arguably the greatest Grand Designs ever, you’ve just seen the best house I’ve ever seen. Wow.’

Others were sad about the couple’s divorce. @catherinebuca wrote: ‘*gasp* Is this the first divorce? Kevin’s overseen endless babies, but divorces?’

Cameras followed as work got underway but when it was featured on Grand Designs in the autumn of 2013 – two-and-a-half years after building started – it was still uninhabitable. 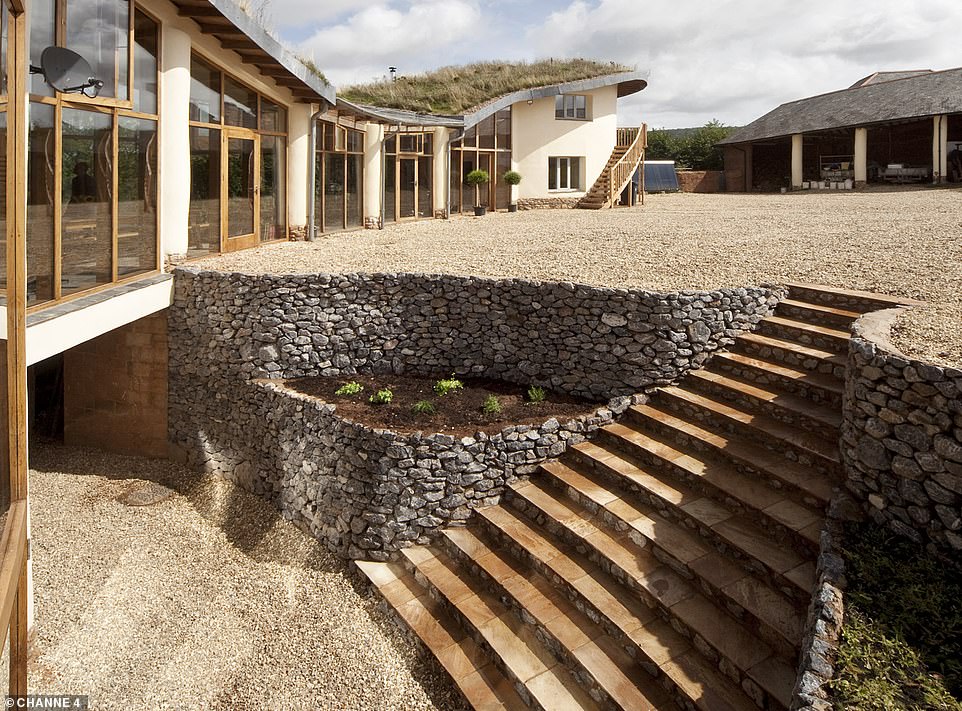 The main access is via a bridge to the second level where the living spaces are. Pictured, the view across the glass-sided walkway towards the second guest annexe, as seen from the second floor bridge accessing the house 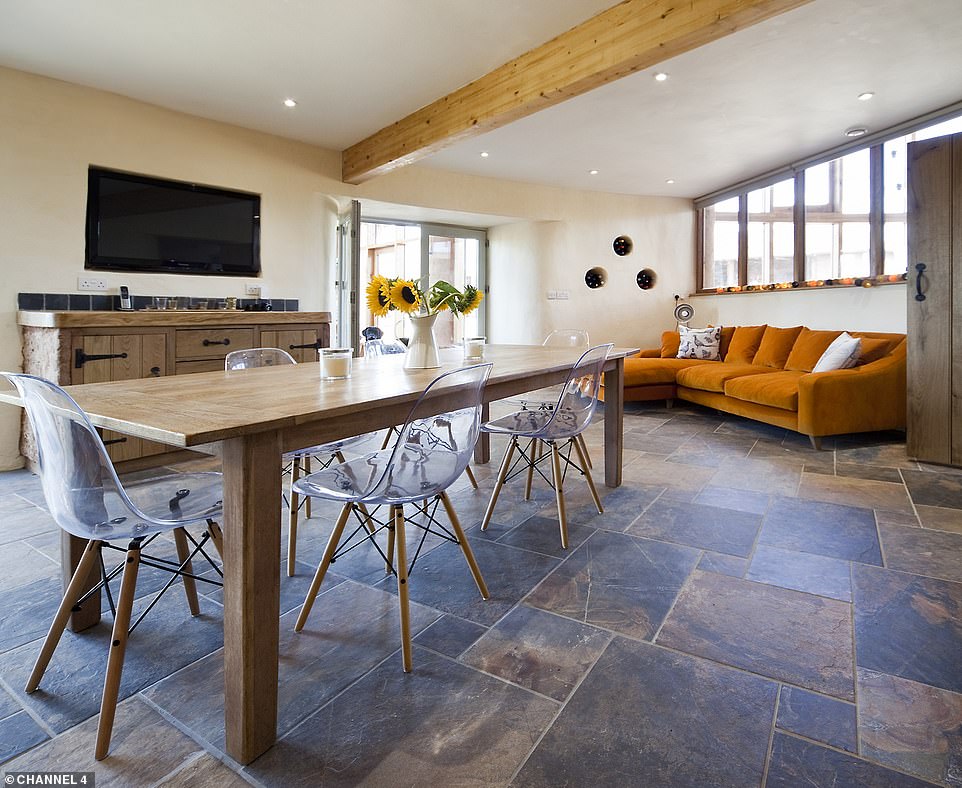 Together with his family and hired help, Mr McCabe tirelessly work to build his home with his bare hands. Pictured, the large kitchen opens out onto a dining area. The cob wall behind the sofa, pictured, has been carved to make built-in wine racks 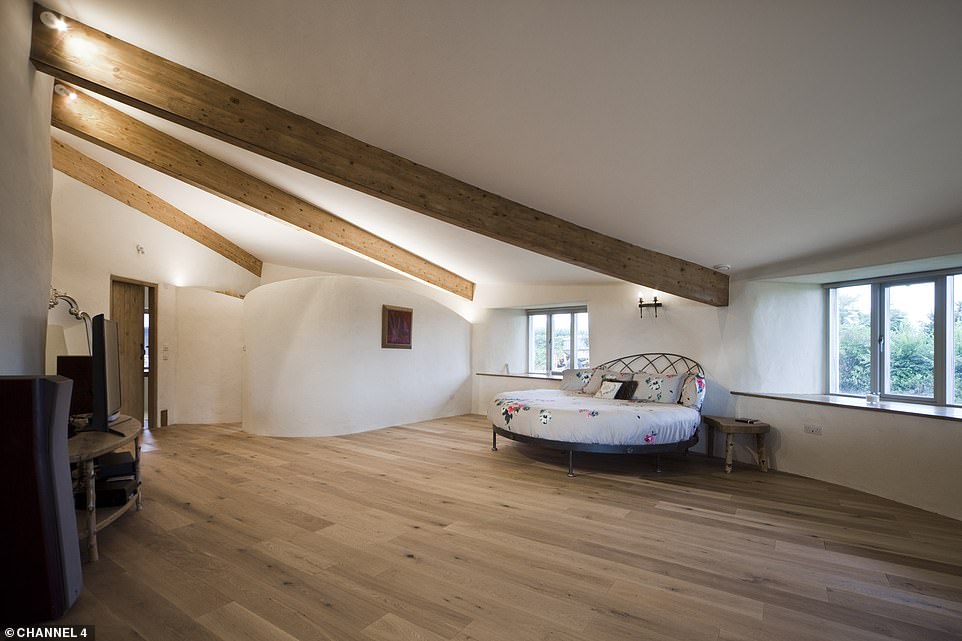 Following widespread requests from viewers, the show returned to Mr McCabe’s home for a follow-up episode that airs tonight.

Mr McCabe admits he does not know how much he has spent building his dream home but reveals the eco-friendly touches – from solar-heated water to a wildflower roof garden – means it costs ‘nothing’ to run.

Mr McCabe says: ‘Size wise it’s a manor house but its running costs are negligible. That’s what I was trying to show. You can have a very green building that is still a very luxurious building.’

The traditional material for English cob is soil (clay-based) mixed with water and straw, sometimes with crushed flint or sand added.

The mixture is shovelled or stamped together, after which a cob fork is used to ladle it onto a stone foundation, before it is trod it into place.

After it dries, the next level or ‘lift’ is added by repeating the process.

The walls are trimmed and are made roughly a metre thick.

Openings are left for windows and doors during the build.

The best time to work with cob is in the summer as the material requires time to dry out before the next ‘lift’.

This takes longer in the colder, wetter winter months.

The home – believed to be the ‘largest Cob building on the planet’ was built a stone’s throw from the cob house Mr McCabe shared with his then wife and their family.

Passionate about the historic building approach, he wanted to show how it could be brought up to modern standards by meeting the highest environmental performance targets ever set in the UK.

The property took the shape of two separate cob cylinders, connected by a glass-sided greenhouse walkway.

The basement level of the main three-storey cylinder, built into the ground, houses an ‘arcade-sized’ games room and a gym. The main access is via a bridge to the second level where the living spaces are and the third level contains the master suite and two ‘cavernous’ additional bedrooms.

The annexe is now a self-contained rental home generating extra income. The undulating roof, which mirrors the curves of the rolling hills beyond, is covered with soil and a natural wildflower garden.

At the start of the project Mr McCabe estimated it would take three months for the cob build to complete, a prediction presenter McCloud thought was wildly ambitious.

Stepping onto the site for the first time, McCloud noted: ‘It looks like they’re building a bloody bypass. And there’s a Roman ampitheatre being revealed. It’s vast.’

Together with his family and hired help, Mr McCabe tirelessly work to build his home with his bare hands. The schedule was further delayed by the torrential downpours of the summer of 2012, meaning the roof wasn’t laid until just before their deadline of winter 2012.

The cameras returned the following spring to find the home was starting to take place and by the summer of 2013 Mr McCabe had started to insulate and clad the 1m thick cob walls with polystyrene to make it more energy efficient. ‘All new houses have to meet this [new] regulation,’ Mr McCabe explained. ‘I have to show Cob can do this.’

The master craftsman revealed he had to return to full-time work in order to cover the spiralling costs and the family put their five-bedroom £1.1million home on the market. They were dealt a blow when a potential buyer pulled out, with Mr McCabe’s then wife receiving the call on camera.

On McCloud’s final visit of the initial stint, in September 2013, he noted: ‘You get a sense coming in of a farmstead really. It gets bigger. It goes from one to two to three stories. It’s a Cob castle, a fortification in mud that sits astride the hill. The rooms are monumental and the thick, hefty cob walls suggest extraordinary mass… But not a single room is habitable… It’s clear this house won’t be ready to live in any time soon.’

The property’s solar heating system is seen attached on the side of the house. It provides energy for nine months of the year and that it is topped up by the wood burner in the winter. Mr McCabe said energy costs for the home are ‘negligible’ 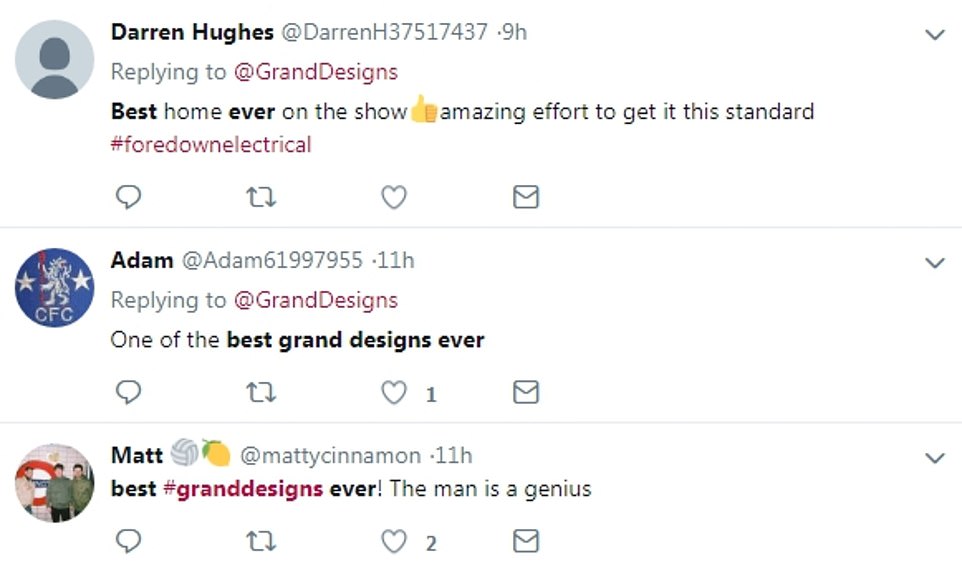 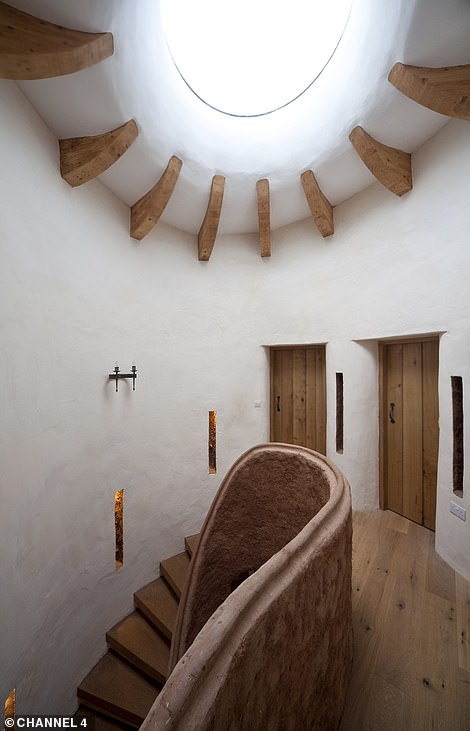 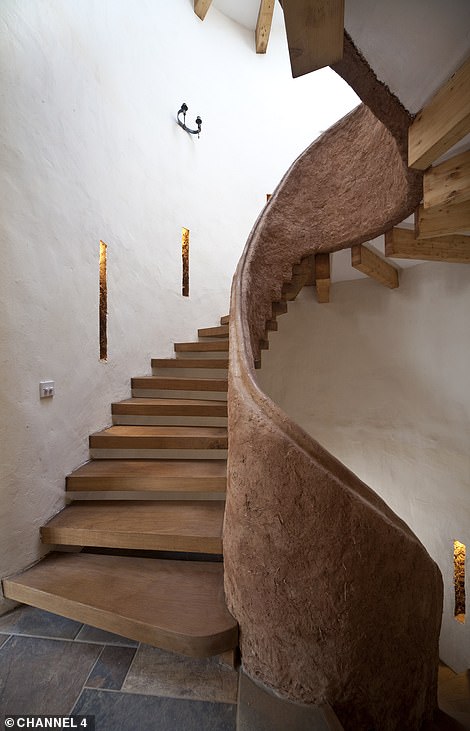 The impressive spiral staircase at the centre of the home, pictured, is also made of cob. Presenter Kevin McCloud can’t help but marvel at the natural material as he explores the property with owner Kevin McCabe 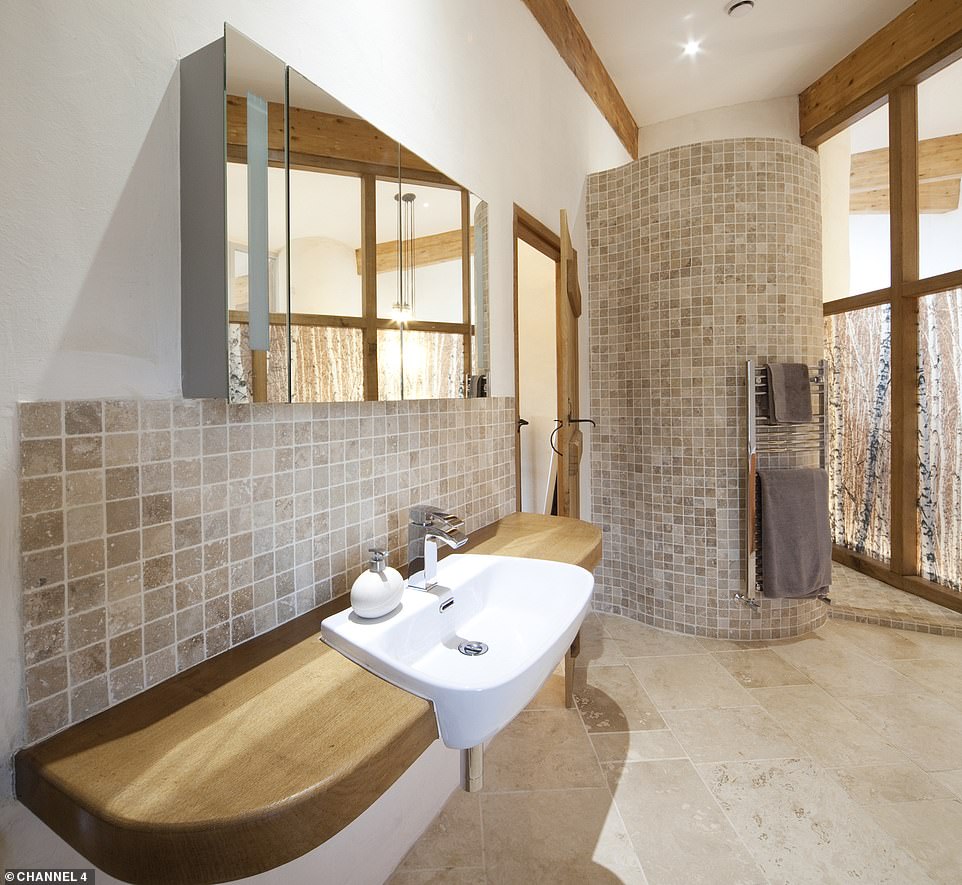 The curves of the house and the master bedroom are continued in the bathroom, where Mr McCabe added a curved tiled shower, pictured, and even a curved wooden counter top, pictured. It is one of three bedrooms in the main part of the house

Approaching the finished property for the first time he is clearly impressed, saying: ‘Wow. That looks like it’s straight off the cover of a 70s prog rock album. It’s a fantasy fusion of cob, grass and stone.’

His wonderment continues as he is given a tour of the home. ‘It looks done,’ he says admiringly. ‘It looks very beautiful and very generous, very embracing.’

Cob is on show everywhere in the property, from the central circular staircase to the kitchen counter and the wood burning fire in the family living room. 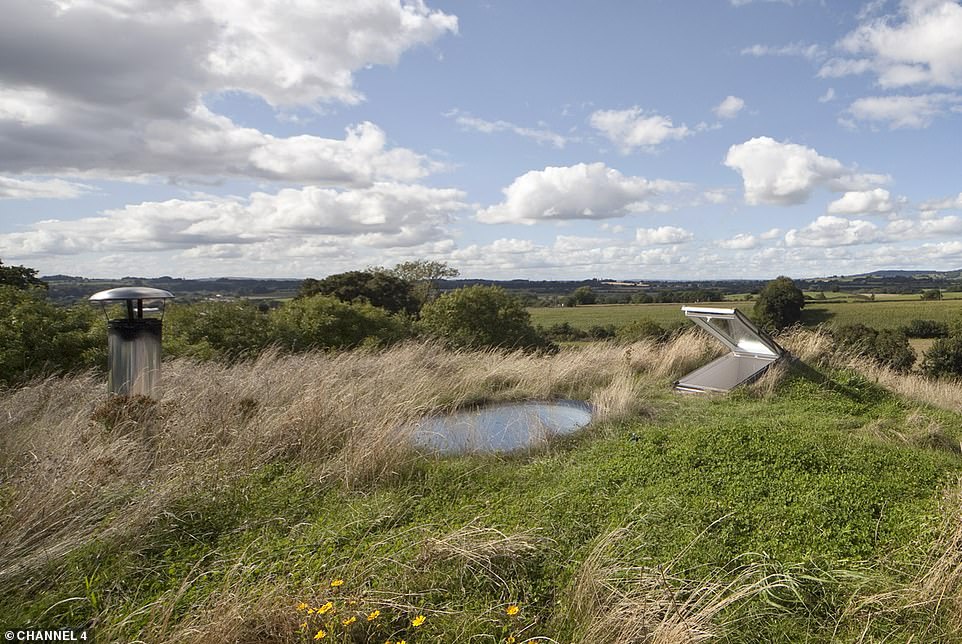 The undulating roof, pictured, which mirrors the curves of the rolling hills beyond, is covered with soil and a natural wildflower garden. The idea adds to the eco-friendly credentials of the stunning countryside home 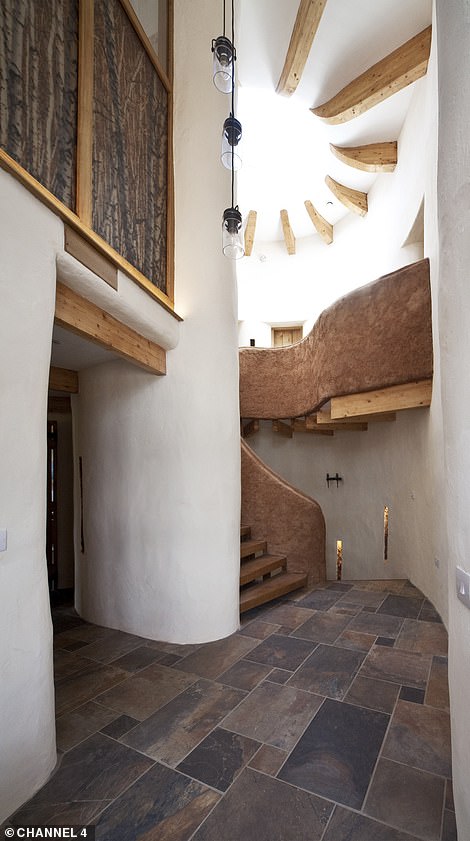 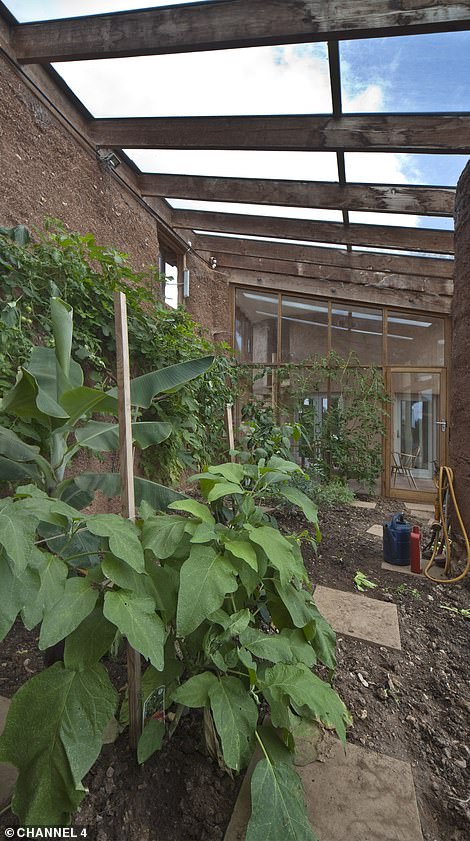 The cob staircase forms a beautiful centrepiece for the curving home, as seen in the second floor entrance way (left). Tomatoes grow in the greenhouse connecting the main home to the annexe, which is used as a self-contained rental property 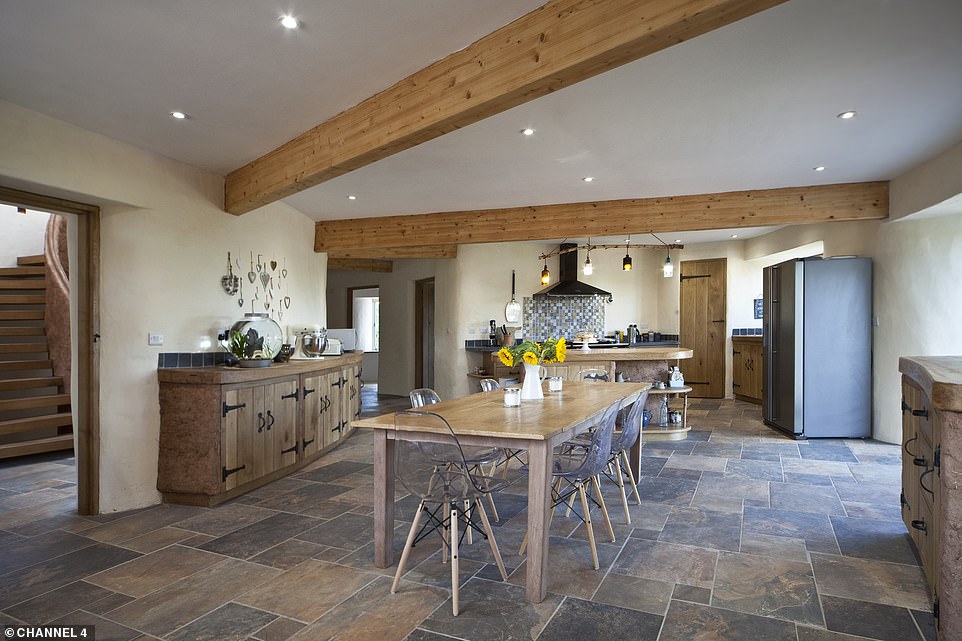 Mr McCabe wanted to show how cob can be used to create a luxurious family home that meets the highest modern building standards. Pictured, the family kitchen – complete with exposed cob counters – is an excellent demonstration of this 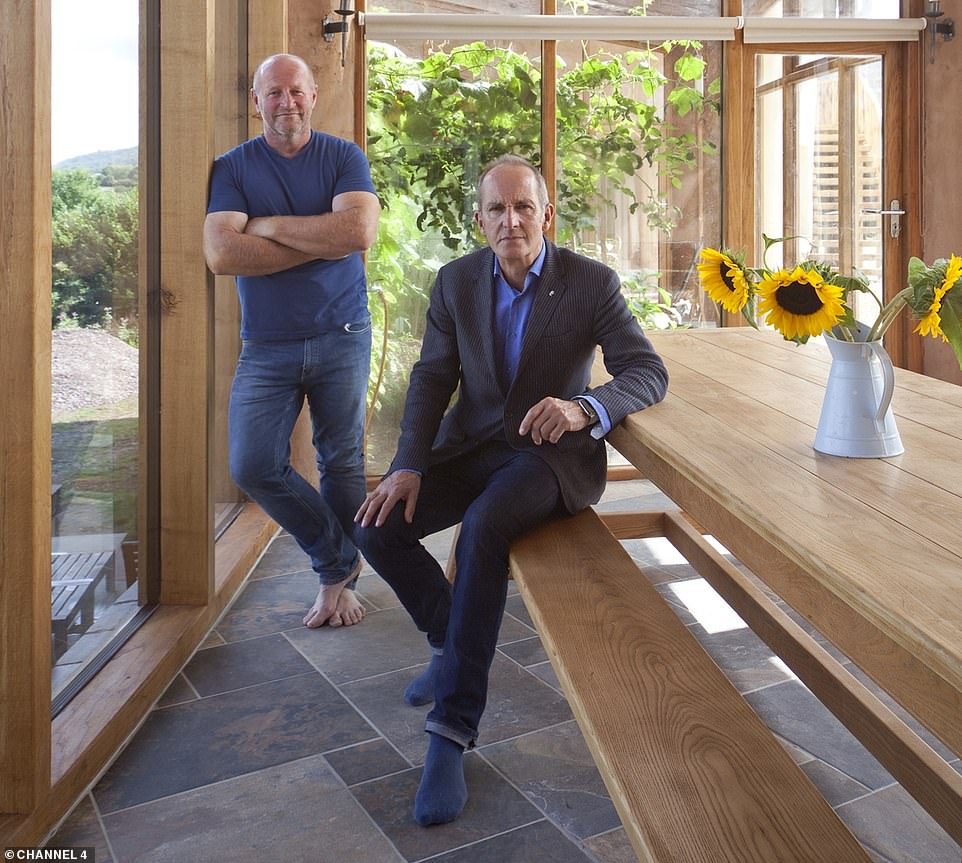 Presenter Kevin McCloud, right, first visited Kevin McCabe, left, and his then wife in 2011 when they embarked on the project. He last visited with Grand Designs in 2013 and returned this summer for tonight’s hotly-anticipated revist episode

Stepping inside, McCloud is struck by its unusual appearance. ‘Oh my word Kevin,’ he exclaims. ‘Wow. This is very beautiful. Inside is where the wibbly wobbly fantasy language of cob has been fully explored… It demonstrates what the material can do.’

Mr McCabe explains its solar heating system provides energy for nine months of the year and that it is topped up by the wood burner in the winter. This combined with its triple glazed window means the property produces more energy than it uses, he adds.

McCloud compares the master bedroom to a ‘penthouse apartment’, adding: ‘It reminds me of French castles I have been to but without the draughts.

‘The sheer scale of the place is mind boggling… There are two more equally cavernous rooms on this floor… In the basement there is an arcade-sized games room and a gym.’

Questioned on the overall budget, Mr McCabe admits he doesn’t know how much it has cost overall and describes it as a ‘labour of love’.

He says: ‘I honestly don’t know what I’ve spent. There’s no point, there’s no need… ‘Bits of it have been very challenging but it’s been so worthwhile. It’s beautiful.’