Don’t bank on getting an appointment when salons reopen! Hairdressers reveal they already have THOUSANDS on the waiting list – with appointments starting at 5am (and you can forget time-consuming hair extensions)

With the Prime Minister considering plans for hairdressers and barber shops to reopen later this month, salons have already been inundated with requests from Britons desperate for a trim.

Two central London salons told FEMAIL they have waiting lists of 2,000 and 3,000 respectively, while Treatwell – one of Europe’s biggest hair and beauty appointment platforms – has reported a 410 per cent increase in bookings last week compared to the first week of lockdown.

Hairdressers closed their doors in late March and aren’t expected to reopen until mid-July, but ministers are now discussing moving the date forward to kickstart the UK economy, The Telegraph has reported.

It is thought salons could reopen as early as June 15 – the same date non-essential shops and businesses will return – with staff wearing dentist-style masks and gloves to prevent the spread of coronavirus.

Many branches are preparing for an onslaught of eager customers – but more than three quarters of the National Hair and Beauty Federation’s 1,600 members claim they are very well prepared to return to business.

Here FEMAIL takes a look at what the hair salon experience will entail post-lockdown – and how likely you are to bag an appointment. 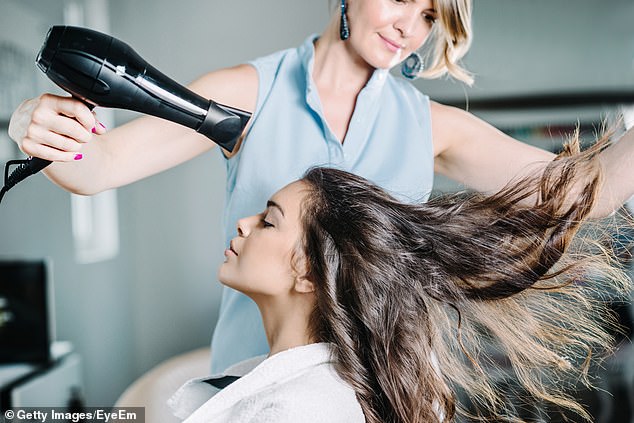 Two central London salons told FEMAIL they have waiting lists of 2,000 and 3,000 respectively, while Treatwell – Europe’s biggest hair and beauty platform – has reported a 410 per cent increase in bookings last week compared to the first week of lockdown

Celebrity hairdresser Michael Van Clarke has a waiting list of 3,000

Michael Van Clarke’s award-winning Soho salon is currently taking bookings on the understanding they may be moved.

The stylist told FEMAIL: ‘We have a long list of clients, currently at 3,000 but growing daily. Clients have asked for the first available appointments wherever that will be, and we are now hoping for July.’

‘While 3,000 clients wanting to come within the first few days of opening clearly isn’t possible, by opening for two shifts a day from 7am until 2pm, and 2pm until 9pm for seven days a week, we can operate 14 shifts across the week with a reduced team in on each shift.

‘By eliminating some longer processes like hair extensions, we think we can cater for the waiting list within two to three weeks.’

Michael said they have removed half the seating in their large central London salon to improve social distancing, with two staff dedicated to an all-day cleaning rota of high touch points surfaces, and stations will be disinfected after each client. 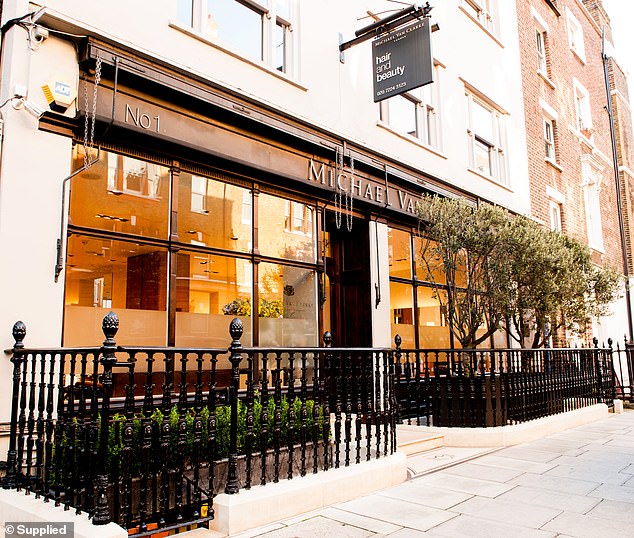 Everyone entering the building will be required to wash their hands, while masks for clients and staff are likely and visors are ‘possible’. Clients won’t need to use the reception desk as they will prepay for their booking on the phone, with any additional purchases made using touch pay on an iPad.

‘If we re-open before a vaccine or new cases are at negligible levels, it will be a more functional affair with fewer people and less of a party atmosphere,’ Michael said.

‘Long service bookings like hair extensions will not be taken, and blow-drying may be limited subject to Government advice. But we’ll find ways to compensate and make it enjoyable beyond the amazing fresh hair.

‘The more limited work hours will be more valued and so productivity may increase, too. Plus most of us will be returning to more organised homes and gardens after work!’ 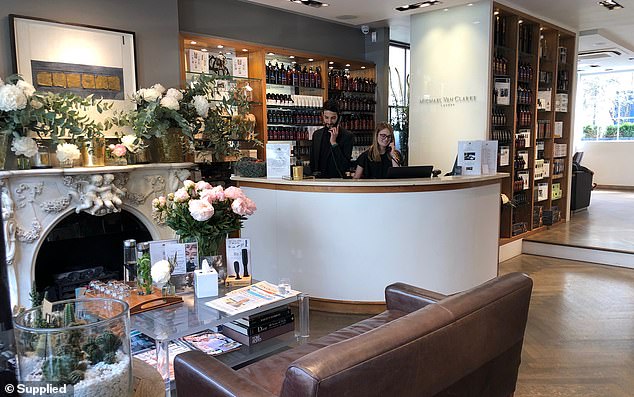 Everyone entering the building will be required to wash their hands, while masks for clients and staff are likely and visors are ‘possible, Michael said. Pictured: the salon reception pre-lockdown

Salon 64, owned by celebrity hairdresser Ricky Walters, also claims to have thousands desperate for an appointment.

Ricky told FEMAIL they too are taking every precaution to ensure the safety of their staff and clients, and will take everyone’s temperature upon entering the salon with an infrared thermometer. 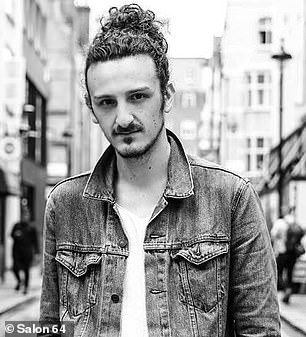 Salon 64, owned by celebrity hairdresser Ricky Walters, also claims to have thousands desperate for an appointment

‘Everything is going disposable!’ he added. ‘From the gowns our clients wear to the towels we use to dry hair, everything will be single use.

‘Still conscious of our environmental responsibility, we are using eco-friendly bio-degradable towels and gowns that decompose at the same speed as a banana skin from our favourite eco-brand Scrummi. Even our cups and glassware will all be single use.’

Ricky said they are installing ‘sneeze screens’ to protect clients at the front desk as well as floor-to-ceiling screens between each section.

‘Clients will be supplied with a face mask to wear along with the team all wearing gloves, branded 64 face masks and 64 shields,’ he said.

‘We are currently looking into pre-payment options to eliminate unnecessary human interaction when paying at the front desk.

‘We know with our innovation and high standards, we will continue to provide an incredible environment and positive energy even with these new restrictions.’

Hair and beauty platforms Treatwell warns ‘walk-ins are no more’

Treatwell has said 60 per cent of its UK customers are planning on booking in for a haircut within the first two weeks of salons reopening.

As such, the beauty firm warns Brits could see the ‘end of the walk-in’ thanks to exceptionally long waiting lists and plans to combat overcrowding.

Fewer people will also be allowed in the salon at any given time, so it follows that customers will be required to secure an appointment prior to visiting the salon to reduce the number of people waiting inside or out.

Treatwell told FEMAIL they’ve received a 410 per cent increase in bookings since the government announced salons could reopen in July. 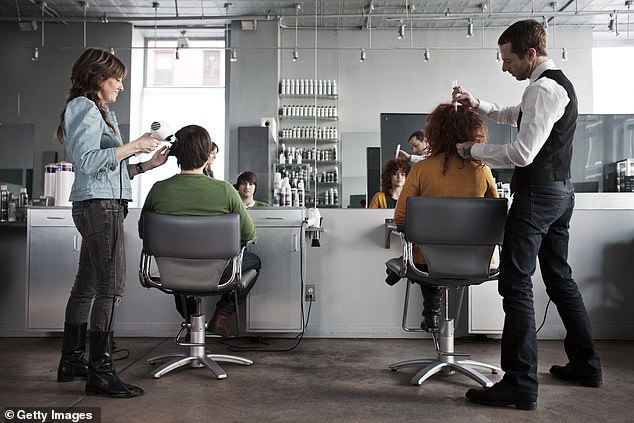 Treatwell has said 60 per cent of its UK customers are planning on booking in for a haircut within the first two weeks of salons reopening. Pictured: stock image

A spokesperson said: ‘As the date for reopening approaches, demand for hair and beauty appointments is growing daily on Treatwell – last week saw a 410 per cent increase in bookings compared with the first week of lockdown.’

Co-owner of London-based Naked Hare Group Sofia explained: ‘Planning is key post lockdown; walk-in appointments may be a thing of the past as there will be fewer appointments available during the day.

‘Each treatment will take a little longer to ensure we have enough time to thoroughly clean the room before the next client and waiting areas are a no go.

‘At least having an appointment time means we’re not waiting in a massive queue (which seems like the norm right now) but it will take some getting used to for sure.’

Gina Conway’s Aveda concessions, which boast three locations in London, told FEMAIL they will be reopening for socially distanced colour consultations and retail from June 15, and all services on July 4.

A spokesperson revealed they already had a waiting list of ‘several hundreds’ of clients after they were inundated with requests, and they initially intended to start making bookings from next Monday to start on July 4.

One of Britain’s first hairdressers ready for reopening is the Gatsby & Miller in Amersham, Buckinghamshire – one of the 25,000 UK salon partners of beauty giant L’Oreal which is creating a blueprint for the sector.

This includes a digital screen in the window to display important reminders about social distancing, and clients being welcomed by one mask-wearing stylist who will stay with them for their visit via a one-way system.

All staff will be wearing gloves and masks which will be changed throughout the day, while customers will be also asked to wear a mask during the appointment and hand sanitiser dispensers will be provided for their use.

It is understood the Department for Business has started to draw up social distancing guidelines which would force hairdressers to wear face masks, perspex visors and gloves.

However, in response to reports this week that PM Boris Johnson is considering allowing salons to reopen in June, they may reopen earlier.

‘Clients are encouraged to buy gift vouchers in advance of their appointment to benefit the NHS, as Gina will pledge £10 for every £50 voucher bought to a fund to gift complimentary services to treat local NHS workers.

‘Several new services are being introduced, including the Customised Colour Care Kit, and the Tint & Depart – which will see the colourist apply the tint, while guests will receive a timer and instructions on how to shampoo it out at home.’

They continued: ‘Rules for guests include bringing their own cup for coffee, no guests or friends in the salon, bringing your own face mask and the provision of a PPE Good Hygeine Goody Bag which includes two towels, a disposable gown, gloves, a face mask, travel colour conserve shampoo and conditioners and an Aveda tea bag and Aveda Demi+ – a reduced colour service which processes faster (under 30 minutes) for those clients who don’t need 100 per cent grey coverage.

‘There will be a surcharge for Hygiene Goodie bags of £3.

‘We will have floor mats indicating distancing indoors and outside salon, as well as chairs for waiting if the weather is good outside.’

They added: ‘We are encouraging all our clients to prepay so that we can go cashless and are just launching a new app where they can pay from their own phones.

‘We have a new software system that can check people in and out via mobiles. We’re asking clients not to cancel at the last minute either, as appointments will be highly sought after but we can’t reallocate them with just a few hours notice.’

Last week the Health Secretary Matt Hancock would not commit to hairdressers being allowed to open on June 15 but is working to ensure they are open as soon as possible.

Downing Street has refused to rule out reopening salons on June 15, but there is no final decision as yet.

A Department for Business spokesman told The Telegraph: ‘The Government has set up task forces to work with industry representatives to develop safe ways for businesses such as hairdressers to open at the earliest point at which it is safe to do so.’