Has our obsession with immersive theatre killed our imagination?

Starting next week, hundreds of Melburnians will go through the doors of the Convention Centre and be transported to the FBI’s Quantico training academy. As rookie agents, they’ll hunt down clues and solve puzzles on their way to a heroic climax. 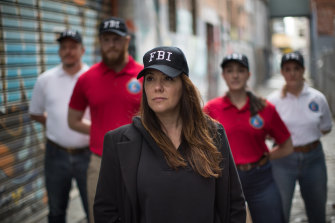 Yes, it’s another immersive theatre show. It’s considered the perfect COVID-safe solution to bring theatre back to life, and some see it as a permanent change to our arts landscape. But for others, it’s an irritating, exclusionary trend that’s killing the joy and imagination of theatre.

At Malthouse, the Twin-Peaks-Meets-Hamlet Because the Night is about to become the company’s biggest ticket seller in its 40-year history. The imminent RISING festival will see the Newport Substation transformed into THIS., a three-level extravaganza of “choose your own adventure” performance, mud wrestling and mayhem.

And the RISE pandemic arts grants, doled out from a $200 million Commonwealth government fund, promise more to come. So far the feds have stumped up cash for Underground Cinema’s FBI, a $1.7m “immersive mystery story” by artist Rone, an “immersive theatrical experience inspired by Shakespeare’s A Midsummer Night’s Dream” at the Palais, and Journey, a “multi-platform immersive adventure” from Arena Theatre Company.

Tamasein Holyman is the creative director of FBI: a show that had been three weeks from opening last year before the pandemic hit. She trained in traditional theatre in Melbourne but “even though I loved traditional theatre it somehow fell short of the way the world was changing for me,” she says. “I just wanted to explore something more.”

She set up Underground Cinema in Australia and their breakout moment was Dirty Dancing, the 2019 transformation of Flemington into Kellerman’s Mountain Resort in 1963, with 50 actors and dancers bringing life to the hit movie as 500 people a night wandered through the action.

Prep was intense: the actors had to know the show and its universe as if it was their own life.

“For a successful immersive it has to have a level of detail, attention, care on every level,” says Holyman. “I always talk about ‘not being able to see behind the Matrix’.”

When patrons discovered the secret dance in the staff quarters “their jaws dropped, they completely forgot where they were”, Holyman says. “It was just people stepping into their dreams.” 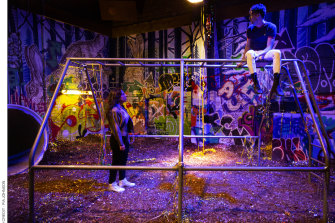 Artemis Ioannides and Keegan Joyce in the labyrinth of Because The Night.Credit:Pia Johnson

FBI, she says, will send visitors down a rabbit hole. “It’s super-satisfying, super-epic.” She suggests you keep your eyes out for a secret file, and brush up on crossword skills.

Matt Lutton, artistic director at Malthouse, says his own immersive show is about to become their biggest hit, and their data shows 65 per cent of ticket buyers are entering the building for the first time.

“This form feels very open and inclusive,” he says. “It really feels like it takes down a barrier for people.”

Audiences love the sense of control, a sense they can “curate” their experience, Lutton says. He feels the rise of gaming has created a “different type of audience member who sees himself as a protagonist, a character” and wants to explore with a level of freedom other forms don’t provide. The key to drama is always narrative and character, he says, to take it beyond a “purely sensorial experience”. 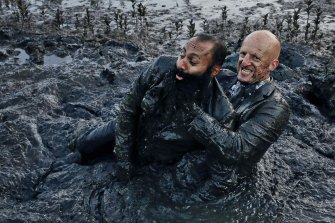 THIS. a performance work for RISING.Credit:Jeff Busby

Later this year they’re back to “putting on plays again”, he says, and they don’t plan to do immersive every year. But he wants to bottle this genie: even with conventional theatre, he feels more can be done to “activate” the audience.

But David Woods, currently directing THIS. for RISING, isn’t so sure.

”It’s big business now in London,” he says. “There are multiple large-scale immersive shows, there’s an immersive Great Gatsby, there are zombie runs, there’s Punchdrunk. It meets that hunger for people to do stuff rather than consume stuff.“

Every immersive show he’s seen “misses something of the absolute essence of what makes theatre special”.

“You’re moving away from this collective, communal experience of imagining something,” he says. “Immersive just breaks it all up and turns it into a spa experience. It becomes this isolated, solo, indulgent response to the age of entitlement.”

An “authentic” setting is “de-training our imaginative muscle”, he fears. And because you can’t fit a big audience into these shows, you bump up the ticket price. “So you’ve got to pay $150 in order to be the one that’s got the privilege to see it.“

He’s not denying the potential for amazing stunts. But too often it just feels like a tricked-up laser tag.

“It’s like we’re losing faith in theatre as an art form and I find that really worrying.”