A Dandenong North family is urging the public to help keep an eye out for their missing daughter and her little dog after the pair vanished during a morning walk near a popular park and creek.

Cara Morrissey, 30, left her home to walk her white Maltese cross poodle named Holly near Tirhatuan Park, which runs along the Dandenong Creek, between Stuff Road and Outlook Drive in Dandenong North, about 7.15am on Tuesday. 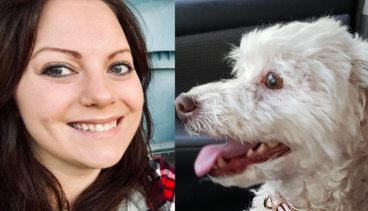 Mother Rhonda Morrissey said when her daughter failed to return home from her morning walk they began to search the nearby area, calling police who have spent the past 24 hours helping search for the missing 30-year-old.

Mrs Morrissey said the disappearance was totally out of character for her daughter and she’d recently been making plans for upcoming events.

“She walks around that park every day with the dog at different times of the day and is quite comfortable with her surroundings. She’s usually gone about 1 ½ hours as the most, but she never came back,” Mrs Morrissey said.

“She left all those things at home – phone, wallet, keys, extra clothes – so we expected she’d only be gone a short amount of time as she hates the cold weather.

Mrs Morrissey asked anyone who lived in the area to check their CCTV cameras for any trace of her daughter, between about 7.15am and 9.30am on Tuesday, and report any sightings to police.

The missing woman is described as being aged 30 with brunette hair. Holly the dog is about seven years old with white fur.

Anyone with information is urged to phone Dandenong police station on 9767 7444.