Heather McMahan’s “The Farewell Tour” is just getting started — and it’s not the only thing on the comedian’s 2022 vision board.

“It’s a joyful show. I’m poking fun at myself. It is just a night of cheater print and sequins and giggles. And we just dig through it — all the uncomfortable things we went through last year, we peel back the layers of that and just dive in. And for me, comedy is if something makes you uncomfortable, let’s talk about it,” the 34-year-old actress exclusively told Us Weekly backstage at her Town Hall show on Thursday, November 18. “If you get into it and you talk about the dark, heavy s—t, that’s when you can live in the light.”

As McMahan’s 692,000 Instagram followers know, her comedy includes celebrity impressions — “I’m not blocked by Ina Garten, but every time I try and comment on her Instagram, it just disappears” — and personal stories about her family, including the sudden loss of her dad just days after he was diagnosed with stage 4 pancreatic cancer in 2015. 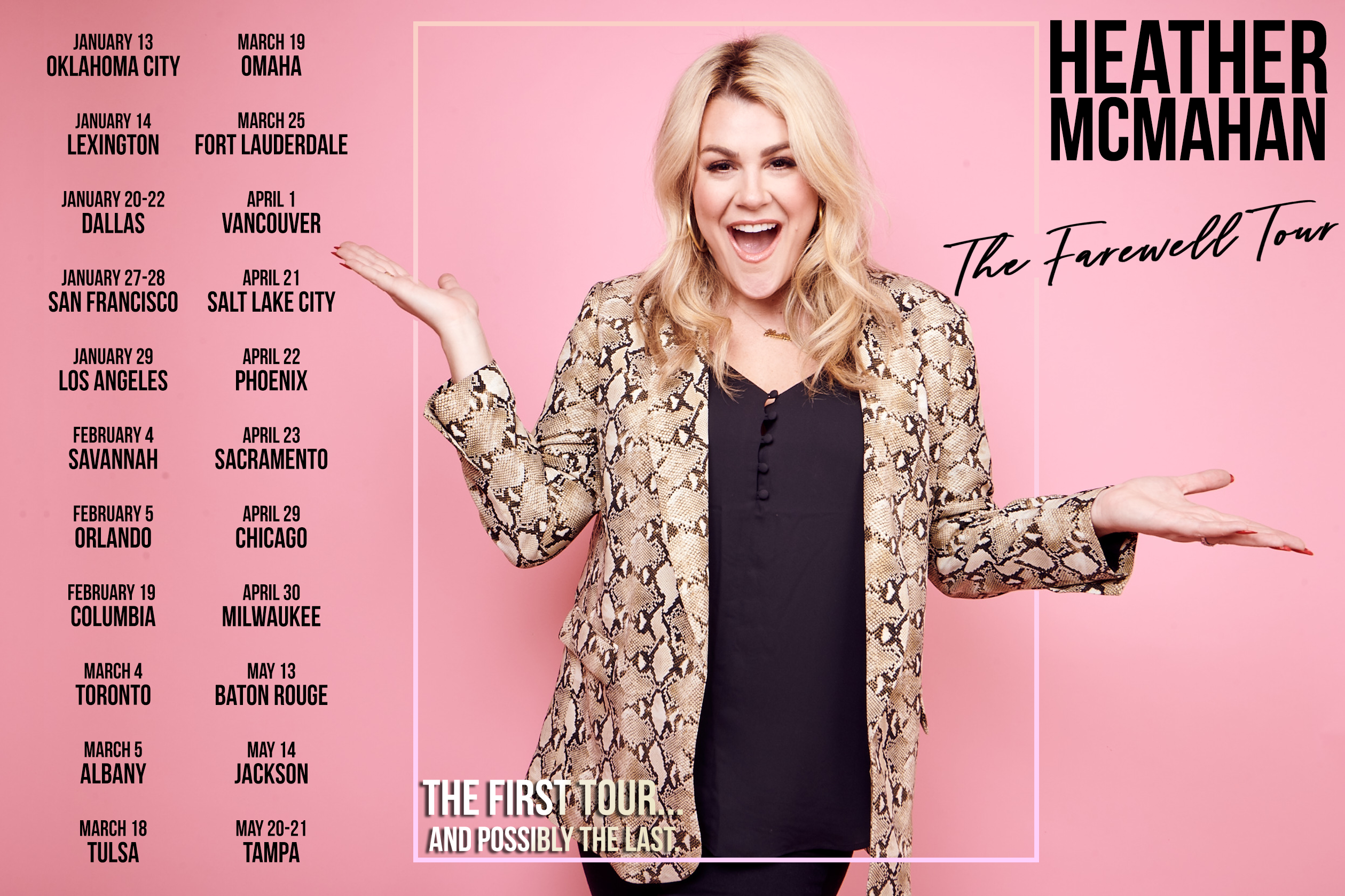 “The last 30 minutes of the show is just a solid set that I love closing with because I talk about my family and my relationship with my dad who passed,” McMahan told Us. “But there’s things that are always changing. Every city you go to, you have a new experience. I love to play with the audience and, you know, the people of that city. There’s always a new surprise every night. But it’s just friggin’ fun. Even if you are new to me, you’re gonna show up and just feel the energy of the room and we’re gonna giggle and everybody’s in on the joke.”

The Best Comedies to Make You Feel Better While Social Distancing

McMahan’s family is also the inspiration behind the series she’s developing for Peacock, which she describes as the “heightened version” of her life.

“It’s a story about three strong women, Southern women specifically, that all have to band together when the patriarch, the head honcho of the family, dies,” she told Us. “I moved home with my mom. My sister moved in [too] when our dad passed and we had to pull ourselves up by the bootstraps and just figure s—t out. And it’s hysterical. It’s a dark comedy. It’s Designing Women meets Curb Your Enthusiasm.”

Pop culture fans who aren’t overly familiar with McMahan may have seen her in Netflix’s popular Christmas movie Love Hard, which has been trending on the streaming service since its October release.

New Movies Added! Your Guide to Every Holiday Movie on TV This Season

“We’re No. 1. That was, like, the ‘Oh s—t moment.’ I’m one of those people who watches Netflix all day long when I have a day off,” the “Absolutely Not” podcast host told Us. “So to see myself in the trailer on the front homepage was just mind-blowing. It was so insane.”

In the holiday movie, McMahan plays Nina Dobrev’s best friend who encourages the Vampire Diaries alum’s character, Natalie, to visit the “perfect match” she met on a dating app. Natalie soon discovers she’s being catfished when she travels to see “Josh” (Jimmy O. Yang) for Christmas.

“The last [scene] you see her in, she says she’s talking to her sponsor,” the Mississippi native recalled. “What is going on with her husband? We need to see how she’s unraveling at home. I feel like Kerry actually is probably the real matchmaker and doesn’t even realize it. … We need a spinoff. I’m ready to go, book me.”

In the meantime, “The Farewell Tour” will continue through 2022, McMahan announced on the Today show on Friday, November 19. Tickets are available now.