Par-ra-pa-pa! Big day in Downing Street. No, nothing to do with yesterday’s soft-soap lockdown easing. It was the grand unveiling of Boris Johnson’s new White House-style press room, built for such a costly sum (£2.6million) the wallpaper may well have been woven from the thread produced by caviar-fed silkworms. (Oops, better not give Carrie ideas!)

First thoughts on the decor? Bright. Very bright. Even that preening pompadour Laurence Llewelyn-Bowen might have blushed at the brilliant blue lustre used as backgroud. Phew-wee, it was a retina-scorcher. We journalists might need to pack a pair of Ray-Bans when we’re finally allowed in there. 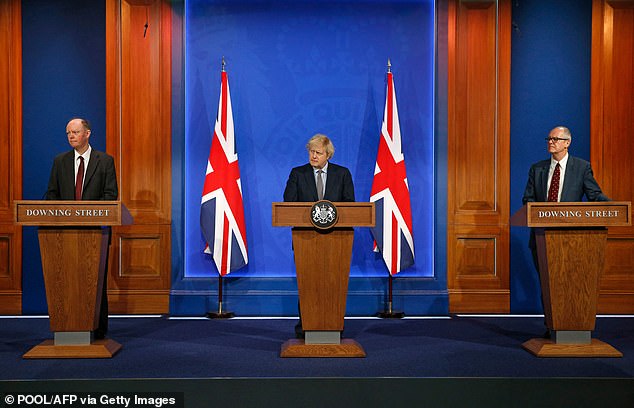 Caution coated his every word. We keep being urged to move slowly but could the country move any slower than it is right now? Sclerotic tortoises with severe cruciate ligament damage move faster than the pace we have adopted for getting out of lockdown. Agonising.

Still, Boris felt yesterday was cause for cheer. We were now allowed out of the house to meet up with friends, something – whisper it – most of the country’s been doing for the past few weeks anyway. The PM said he knew how much it must mean for people to go and have a cup of tea in someone’s garden. Tea? After this past year, I suspect most people were glugging something a little stronger.

Sounding like a pushy PE teacher, he urged us all to get outside and take exercise while the sun was shining. Boris himself was very keen to get back to charging around the tennis court. An unnerving thought.

There was yet more good news on the vaccine front. We heard that GlaxoSmithKline had reached a deal to bottle the Novavax jab up in the North East. Barnard Castle to be precise. Yes, that place made world famous by Dominic Cummings’s ill-fated sojourn there last year. Boris forgot to mention that crucial nugget of detail. Funny that.

Joining the PM were his faithful boffins Chris Whitty and Sir Patrick Vallance. They had new lecterns which for some reason now have ‘Downing Street’ enscribed on them. Horribly naff.

Whitty had brought along a record-breaking number of new graphs which he took yonks explaining.

Really, with all the money they’d spent on this new gadgetry, you’d think the techie nerds at Number 10 might have installed an ejector button for Boris to deploy when these eggheads prattle on too long. Whitty’s main concern was new variants arriving on these shores. A Sky reporter asked why that was so. Only last week he’d defiantly declared new strains arriving here would be met by a ‘wall of vaccine’.

Ah, well, it wasn’t a strong wall as most people have only had their first. ‘It’s a leaky wall,’ Whitty explained, those funny eyes of his bobbling about in their glue. 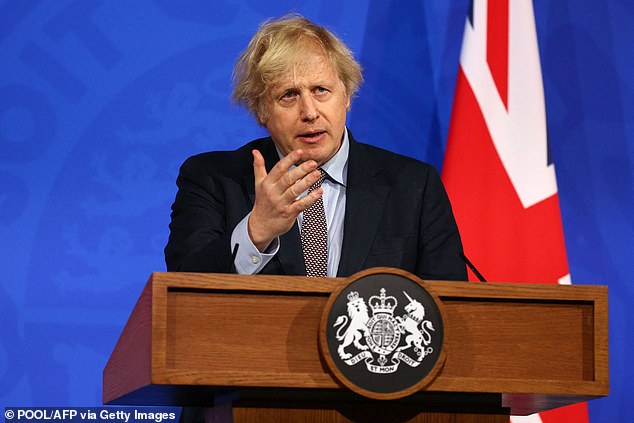 Boris was worried about Europe too. Infections rates there were on the rise, which he said were causing the lines on Whitty’s graphs to ‘curl up like British Rail sandwiches’. You never hear the scientists using such clear language.

Someone from the Financial Times asked whether it was realistic to expect the cops to keep stopping people from breaking the rules as we continue our snail’s pace toward freedom.

Police chiefs have indicated officers are fed up at having to patrol parks to prevent people breaching the regs. Message to the boys in blue: we’re not thrilled about it either.

Boris insisted the police had done an outstanding job during lockdown. He pointed out that they’d handed out around 70,000 fines. Was that necessarily a good thing?

Well, Rishi Sunak probably thinks so. When questions were over, Boris stomped out looking a tad relieved. Not a single mishap with the new set. Better yet – no one asked about that dreaded Arcuri woman, who’s been giving excruciatingly embarrassing details of their four-year affair to a Labour-supporting tabloid.

With the vaccination campaign going so well, who wants to be quizzed about historic allegations of extra-marital sofa sex in the family home?