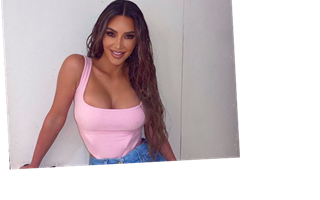 In case you haven’t noticed, the Kardashians are rich. And while Kylie Jenner is out here being an *alleged* billionaire, the entire family’s wealth comes down to another alleged billionaire (and, well, yeah, all the cultures they’ve ripped off). This gal:

Kim’s net worth is still enormous in 2021—and it’s about to be super relevant thanks to her reported split from Kanye West. Let’s get into it, but first I’d like to issue an apology to my bank account, because it’s feeling very attacked right now.

According to Forbes, KKW Beauty is Kim’s most profitable venture yet. In summer 2018, the business earned $100 million in revenue, and Kim owned 100 percent of it.

In June 2020, Kanye claimed that Kim’s massive beauty deal with Coty pushed her into billionaire territory, but Forbes quickly shot down that claim and clarified that she’s not quite there yet.

FYI, Kim launched KKW Beauty in 2017 with Creme Contour Kits priced at $48, and she sold around 300,000 units within just two hours, which comes to more than $14 million—a financial success in spite of the brand being accused of using Blackface in its promotional imagery.

Don’t Forget About Her Mobile Game!

Kim Kardashian: Hollywood is definitely not as big of a Thing as it once was, but back in 2016, it earned Kim so much money that she ended up on the cover of Forbes.

At the time, the magazine reported that Kim’s game had been downloaded 45 million times and made $160 million in revenue. Yes, that’s more money than KKW Beauty has made—but the key difference is that Kim once owned 100 percent of her beauty biz, whereas she took home “only” $45 million of that $160 mil.

Skims Has Made Millions

Skims is Kim’s latest business venture, and according to TMZ her initial launch made $2 million in just a few minutes. Cool-cool-cool.

Occasionally, Kim will donate a portion of her proceeds to charity, like she did at the height of the coronavirus pandemic. But let’s be real, she could probably donate much more instead of bragging about the 14 expensive horses on her Wyoming ranch during an international crisis. Just sayin’.

She Made SO MUCH from Keeping Up With the Kardashians

Keeping Up With the Kardashians is coming to an end, but it made Kim a lot a lot a lot a lot of money. Before we get to her specific slice of the pie, here’s a quick rundown on how much the family’s contract is worth: In 2015, E! agreed to an $80 million deal to keep the show on the air, and then it agreed to another “below $100 million” deal in 2017. That amounts to $180 million total in just four years, which is just…wow.

So how much does Kim get? While Kris Jenner tried to claim that “everybody gets paid pretty much equally,” TMZ reports that Kim split about 50 percent to 60 percent of the family’s contract with Khloé and Kourtney, while the rest of the family got the leftovers. If this is true, Kim got paid 20 percent of around $100 million for KUWTK, aka $20 million.

Obviously, the Kardashians have ended their contract with E! and are now working with Hulu, but financial details haven’t been released yet, so TBD on how much Kim is pocketing.

It might not be their day jobs, but Kim and Kanye West made a ton of money flipping properties. Back in 2017, the couple sold their Bel-Air mansion (which they bought for $9 million) for $17.8 million, earning $8.8 million in the process. According to TMZ, “The sale stands as the most expensive sale ever in the exclusive Bel-Air Crest community.”

Kim and Kanye reportedly paid $40 million for their current home and sunk another $20 million into renovations, and a source told Page Six that it’s causing an issue in their divorce settlement talks. Here’s what the Page Six source said:

And Then There Are Her Endorsements

Kim has worked with many brands over the years, even appearing in Super Bowl commercials:

If you want an idea of how much Kim gets paid per IG, she seemingly admitted that she was offered (and turned down) a $1 million deal with Fashion Nova to post just one picture.

So, What’s Her Total Net Worth?

According to Forbes in June 2020, Kim’s net worth was estimated to be around $900 million, aka so much money that she legit should never post another dangerous appetite suppressant or “detox” ad on Instagram ever again. But the magazine revised its estimation in October 2020 due to a “weakness in cosmetics sales,” putting Kim’s net worth at $780 million.

How Does Kimye’s Divorce Impact Her Net Worth, You Ask?

Kay, so Kim and Kanye’s settlement talks are not public, but Page Six claims that they do have a prenuptial agreement, which reportedly guarantees Kim $1 million for every year of marriage to Kanye (they’ve been married 6 years). Kim also allegedly gets to keep the gifts Kanye has given her, which includes millions of dollars worth of art and jewelry. Since Kim and Kanye are figuring out their settlement ahead of a potential divorce filing, it’s unclear whether the financial details of their split will ever be made public—but stay tuned.