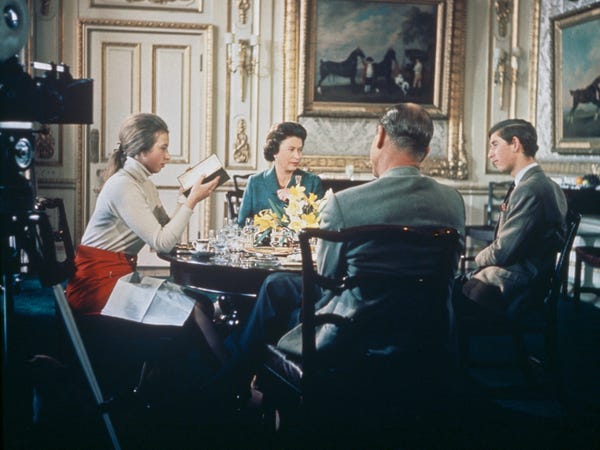 The Queen's holiday home, Balmoral Castle, is a place for the royal family to unwind each summer.

However, the same cannot be said for the staff who accompany Her Majesty to the 50,000-acre estate in the Scottish Highlands.

Insider spoke to former royal chef Darren McGrady, who worked at Buckingham Palace from 1982 until 1993, before moving to Kensington Palace to cook for Princess Diana until 1997.

McGrady recalled joining the family's 10-week stint at Balmoral each summer, which he said was "more nerve-racking than cooking a state banquet for a king, queen, or president" because of the quick turnaround that was expected in the kitchen.

The royals all got involved with the cooking, except Princess Diana, who rinsed the dishes

While life at Buckingham Palace involves tradition, protocol, and plenty of forward planning, it is not always this way when the Queen is on vacation.

During the years McGrady spent at Balmoral, he said the family usually wouldn't decide what they wanted for dinner until the last minute, and often the royals themselves wanted to help out with the cooking.

"Prince Philip always came down first, he was the master of the grill," McGrady told Insider.

"He would go over the menu, and as he was leaving he'd walk over to the pastry [chef] and say, 'Prince Edward is doing dessert.'

"Then Prince Edward would come down and say he'd like to do crepes — so you'd have to make the batter for him," he said.

"Other times it would be Princess Anne who would come down to the kitchen," McGrady said.

"She would say, 'Do you think it's too late to make a cheesecake?' By that time, it was 5 p.m. and we still had a hundred staff to feed. It was a lot of pressure."

No matter what the royals requested though, or how late in the evening it was when they added items to the menu, McGrady said the chefs would never refuse.

"You found a way, unless you couldn't. You made it happen," he said.

"It was always difficult, it was such a family affair. When they were all there in the old days — William, Harry, Beatrice, and Eugenie in the nursery with the nanny — and all the other family there, too, they'd all chip in.

"Except Princess Diana, who couldn't cook. So she just helped the Queen rinse the dishes."

The Queen's children would call her 'Your Majesty' instead of 'Mom'

During the various trips the family would make to the kitchen each day, McGrady said he noticed something peculiar about the way they addressed the monarch.

"It was always funny, they would say 'What has Her Majesty chosen for dinner?'" he said.

"You mean, your mom?" he laughed. "What's this 'Your Royal Highness, Your Majesty?' They always referred to each other by their titles."

Despite the formalities, the royals would often enjoy mealtimes with a casual barbecue in the castle grounds, rather than a typical sit-down dinner you might expect.

However, because the chefs wouldn't know when the family wanted to eat outside until the last minute, it caused some mistakes to be made in the kitchen.

"As soon as the chefs sent the food out to the hills, we'd sit at the bar, drinking alcohol and chatting away," McGrady said.

"The worst sight ever was looking out the pitch-black window to the 50,000-acre estate and seeing a Range Rover coming back with its headlights to the castle.

"It meant one thing — we'd forgotten the potato salad!"

He added: "We would get in trouble for that. All the chefs would panic because we didn't know which section it was."