Taxes should be hiked or the GST raised to fund a major increase in the aged care workforce, with advocates calling for the Productivity Commission to decide how the federal government fixes a sector in crisis as it grapples with staff shortages due to coronavirus outbreaks.

In a pre-budget submission to the federal government, National Seniors calls on both major parties to commit to investing the billions of dollars needed to deliver safe, quality care for elderly Australians – a task that would require making “difficult and unpopular” decisions to raise the cash. 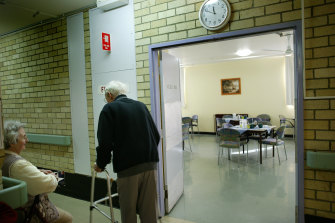 “All parties should commit to investigating the fairest and most efficient way to fund aged care reforms,” the submission said.

The advocacy group estimates between $7 billion and $15 billion in extra funding will be needed to properly staff aged care homes and expand home care packages, as providers and unions join forces lobbying for wage increases in the Commonwealth-funded sector.

An independent Productivity Commission analysis should recommend a funding source for aged care reforms, the submission said, with options including a levy, GST or another tax hike to fund pay rises and expand the workforce by at least 17,000 people a year over the next decade.

On Wednesday, Defence Force teams will be deployed to fill staffing shortages at aged care homes struggling with COVID-19 outbreaks in the Omicron wave that has spread across almost half of the sector’s 2722 homes, with almost 12,000 residents and staff infected and 682 residents dead.

Labor has stepped up its attacks on the government over aged care, moving a motion in the Senate on Tuesday calling on Prime Minister Scott Morrison to sack the minister responsible, Richard Colbeck, and apologise to residents and their families.

During question time on Tuesday, Mr Morrison said the government was focused on “the quality of care that can be provided to people living in the residential aged care facility during this very challenging time”.

The Prime Minister has promised two bonus payments of $400 each to the more than 200,000 workers in the sector, but they are seeking a 25 per cent pay increase at the Fair Work Commission – backed by employers who say they need to raise wages to attract and retain staff.

The Health Services Union, which represents about 15,000 aged care workers, recorded an increase in the proportion of aged care workers quitting the sector entirely in January this year compared to recent years, rising from 22 per cent to 43 per cent of resignations.

HSU NSW state secretary Gerard Hayes said the sector had been in serious trouble two years ago when the Aged Care Royal Commission was held and that “we are now at the point where the required staff simply aren’t there”.

“This is a catastrophe that we knew was happening and the government did nothing about it.”

National Seniors chief advocate Ian Henschke said Mr Morrison would be judged at the coming election on whether the system had improved since the Royal Commission, which “was supposed to restore faith in the aged care system.”

“I’m not sure that people feel any better today than they did previously,” Mr Henschke said.

Mr Morrison has said he called the Royal Commission to ensure the nation’s “oldest and most frail” received “the respect and care that supports their dignity”.

The Prime Minister said at the time that the report’s recommendations provided “a clear road map to improve respect and care for our older Australians” and that his government was “committed to transforming aged care”.

Since then, more than 1480 aged care residents have died with or from COVID-19 and thousands more have been isolated in their rooms, while workers report being unable to properly care for vulnerable residents due to severe staffing shortages.

A spokesman for Health Minister Greg Hunt said aged care funding decisions would be informed from July 2023 by recommendations of the rebadged Independent Hospital and Aged Care Pricing Authority.

Shadow Aged Care Services Minister Clare O’Neil said Labor would, if it was in government, “put a submission to the Fair Work Commission in favour of lifting their wages” and the opposition wanted “to fix our aged care system so that it’s driven by dignity and care” .

“We will continue to consult with aged care workers, residents, providers and experts on aged care reform,” Ms O’Neil said.