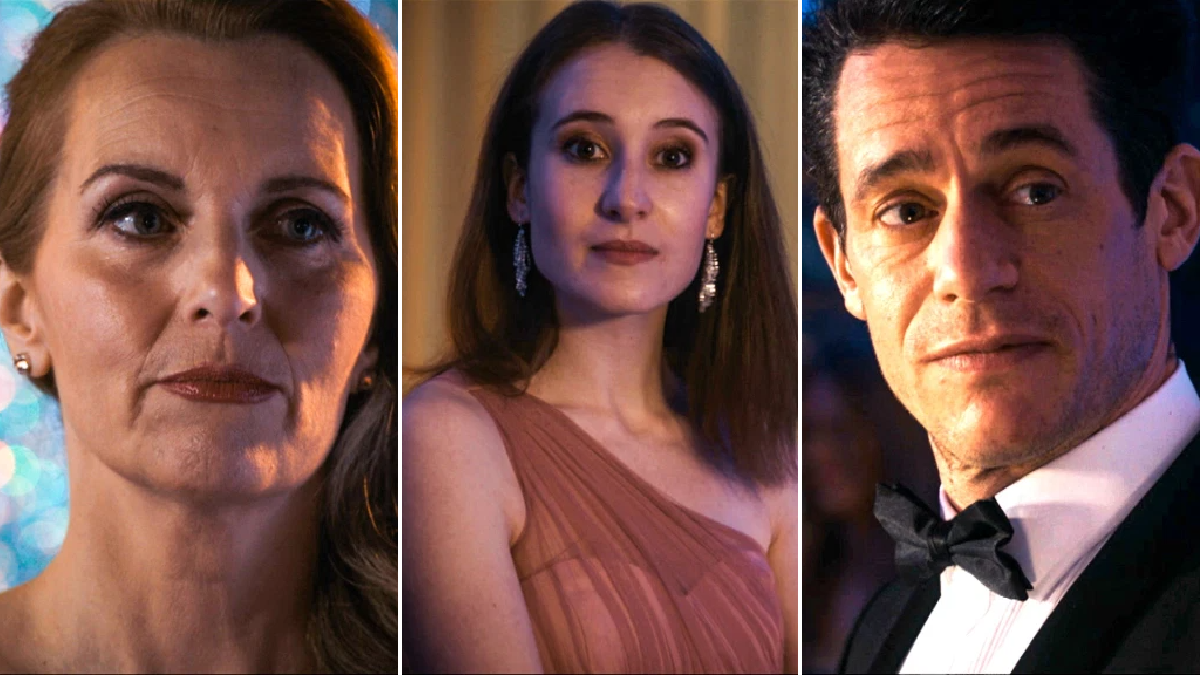 There were some heartbreaking scenes in tonight’s Holby City as Dominic Copeland (David Ames) discovered that his beloved, if occasionally embarrassing, mum Carole (Julia Deakin) has vascular dementia.

She gave him this devastating news at a hospital fundraiser where he was the keynote speaker, just before he was called up to make his speech. After a faltering start, he made the speech all about her and how she’d supported him throughout his life. ‘Behind every brilliant medic there is someone nurturing them, spurring them on, sometimes embarrassingly whooping from the sidelines,’ he said, urging the guest donors to support the hospital with their cash and ‘Be more Carole.’ This echo of ‘Be more Jill’ from ‘It’s A Sin’ carried the same meaning of unconditional love, support and empathy and everyone could benefit from being more Carole.

Then, dramatically, Carole collapsed outside the hospital and needed emergency treatment. Recovering afterwards she apologised for ruining Dominic’s evening. She told him she isn’t worried about dying, but she is scared that she might not be herself by the time it happens. Dominic isn’t ready to contemplate losing his mum and insisted he’d find a way to make sure she gets better.

There were happier times for Ange (Dawn Steele) and Josh (Trieve Blackwood-Cambridge), as they discovered they’re having twins. They’d already decided that they wanted to go ahead with the pregnancy, and Ange was reassured that Josh is mature enough to cope with the demands of being a father.

He pointed out that he’s been a carer to his mum for half of his life, so he’s not deterred even by the thought of Ange being ‘irritable, swollen and exhausted’ (her words, not his. If they were his she’d probably have dumped him on the spot).

Meanwhile, Jeni Sinclaire (Debra Stephenson) took time out of raising funds for the hospital to enrich her own bank account; as she literally sold Evie Fletcher (Phoebe French) off to the nasty man who attacked another woman in a previous episode.

Rich Peterson (Richard Pepper) is pretending to be a suave philanthropist, but we know he’s really an evil abuser.

It was horrible to watch Jeni encourage Evie to go off with him to a ‘party,’ especially given that Jeni is Fletch (Alex Walkinshaw)’s partner and she’s manipulating Evie right under his nose. How is Evie going to get out of this awful situation?

And Henrik Hanssen (Guy Henry)’s days as CEO of the hospital would seem to be numbered as the CQC are planning to install someone else into the seat of power. The rumour among the staff is that it’s going to be someone they already know, which opens up all kinds of possibilities.

But before that happens, Max (Jo Martin) managed to persuade Hanssen to stop avoiding Abs Shah (Ali Hadji-Heshmati) and talk to the boy. ‘The bravest thing sometimes we can say is… help,’ Hanssen told him, promising to be with him every step of the way as he confesses to the police that he killed Reyhan Shah – and why.

Sue Haasler is the author of five novels and the official BBC Holby City book, which you can read about here.

If you’ve got a soap or TV story, video or pictures get in touch by emailing us [email protected] – we’d love to hear from you.

Join the community by leaving a comment below and stay updated on all things soaps on our homepage.