A talented baker has shared his simple recipe for the ultimate fried chicken wings – complete with a crispy coating made from instant two-minute noodles.

Morgan Hipworth, from Melbourne, shared a now-viral TikTok video showing exactly how he created the snack in which he described as a ‘match made in heaven’.

To make the comfort food at home, the 20-year-old suggested soaking the wings in buttermilk and salt for at least one hour or leave it in the fridge overnight. 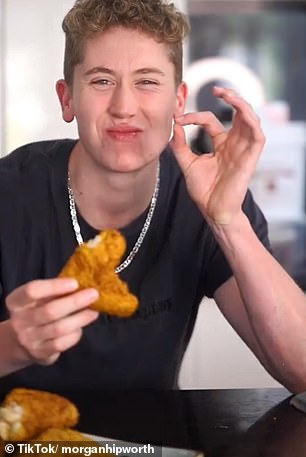 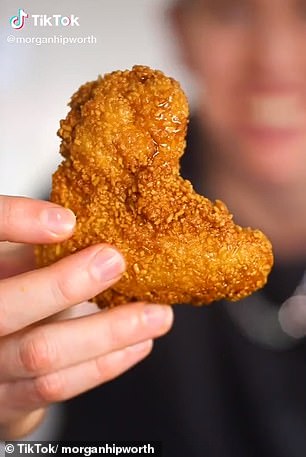 In a bowl combine the chicken wings, buttermilk and salt and allow to marinate for at least an hour to up to overnight.

In the bowl of a food processor add the dried noodles and pulse until a fine crumb forms. Transfer crumb to a bowl.

In another bowl whisk together the egg and milk to create an egg wash.

Add the plain flour to another bowl.

Preheat a pan over medium-low heat and fill with oil, fry the coated wings for 6-8 minutes turning halfway until golden brown and cooked through.

Combine the honey, soy sauce and the flavouring sachet.

Transfer the cooked wings to a bowl and toss with the honey soy sauce.

‘For the coating, we’re going to be using a crushed two-minute noodle, which is a familiar flavour we all love but with a hint of spice,’ Morgan said in the video.

Using a food processor, he blended the noodles into a fine crumb and then he placed the mixture in a bowl.

In a second bowl, he whisked together the egg and milk to create an egg wash, while the third bowl contained plain flour.

Once the chicken wings are marinated, he removed the pieces from the buttermilk, dipped them into the flour, then the egg wash, and finally into the crumbed noodles.

Over medium-low heat, Morgan fried the coated chicken wings for six to eight minutes or until golden and cooked through.

To create a tasty ‘sticky’ sauce, he mixed honey, soy sauce and the spicy flavouring sachet from the noodle packet.

In a new bowl, Morgan tossed the cooked fried wings with the honey soy sauce.

The chicken wings can be eaten on its own or served on a bed of Asian greens – bok choy and Chinese broccoli stir fried in oyster sauce.

His video has since been viewed more than 375,000 times, with hundreds of foodies saying they couldn’t wait to try out his recipe.