How did Lil Nas X become the world’s most controversial pop star?

In what’s been an eventful week for the 21-year-old he’s been called a bad role model, labelled a “satanist”, and is now being sued by Nike. 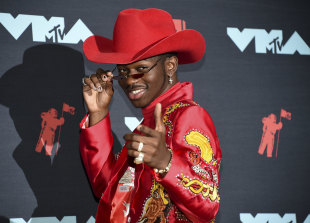 Lil Nas X, pictured here in 2019, is being accused of promoting satanism.Credit:Invision

That’s a wild trifecta. What did he do?

To start with, the singer – whose real name is Montero Lamar Hill – released a new song called Montero (Call Me By Your Name), a celebration of his newfound openly gay identity following his public coming out back in July 2019.

He also released a touching note to his 14-year-old self highlighting the personal stakes involved in the new track.

That’s a beautiful, powerful sentiment. Why would anyone get upset?

Homophobia, mainly. And then there’s the music video.

What happens in the music video?

He pole-dances down to hell and gives Satan a lap dance, before snapping Satan’s neck and stealing his crown as ruler of the underworld.

Critics said the video was inappropriate, particularly considering many of Lil Nas X’s fans are children. US artist Joyner Lucas suggested the singer forgot that Old Town Road was “every kids’ anthem”.

“Children love him for that record. They tuned in and subscribed to his channels. So with no disclaimer he just dropped some left field ish and all our kids seen it,” Joyner complained.

“Rosa Parks didn’t sit on the front of the bus so Lil Nas X could have sex with Satan in a music video,” another viral comment noted.

C’mon, pop music has been tilting at Illuminati imagery for decades.

Well, then there’s the shoes. 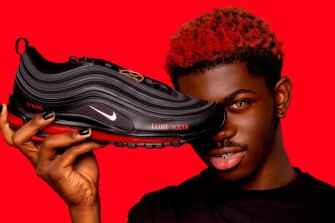 Alongside the single, Lil Nas X released 666 pairs of “Satan shoes” – modified Nike Air Max 97s containing “one drop of human blood” in their soles. A collaboration with streetwear label MSCHF, the shoes retailed for $US1,018 and sold out in under a minute. And so the backlash heightened.

No, over “devil worship”. Kristi Noem, the Republican governor of South Dakota – who earlier this year gifted Trump a mini bust of Mount Rushmore with his face etched into it – led the criticism.

“This is outrageous, disgusting and perverted and on #PalmSunday no less. Somehow Lil Nas X thinks that Satanic worship should be mainstream and normal. I don’t think there have been better candidates to cancel than Lil Nas X and these shoes,” she wrote on Twitter.

She went on to claim the shoes prove the US is “in a fight for the soul of our nation”. “We need to fight hard. And we need to fight smart. We have to win,” she wrote.

Lil Nas X is suddenly Madonna in the ’80s. How did he take the criticism?

Like any child of the internet, he’s delightfully trolled the backlash, first issuing a faux apology on YouTube and then addressing Governor Noem directly on Twitter.

“You are a whole governor and you’re on here tweeting about some damn shoes. Do your job,” he wrote.

He was also strongly unrepentant about his song’s message.

“I spent my entire teenage years hating myself because of the shit y’all preached would happen to me because I was gay. So I hope u are mad, stay mad, feel the same anger you teach us to have towards ourselves,” he added.

How’s the backlash affecting the track?

Perfectly. The video is the highest trending music video on YouTube with more than 37 million views, while the single is the #1 new song on Spotify globally.

Uh, to an extent. Nike has since announced it’s suing over the shoe. In a statement to The New York Times, the company said “it did not design or release these shoes and we do not endorse them”.

According to Billboard, Nike is “seeking compensatory, statutory and punitive damages, plus disgorgement of profits in an amount to be determined and is asking the court to order that the shoes and all marketing materials be turned over to Nike for destruction.”

Lil Nas X seems unconcerned. If anything, it’s given him more inspiration for his other favourite pastime: making memes.

Making memes vs devil worship, I’m not sure what’s worse?