How Does Arnold Schwarzenegger Really Feel About His Daughter's Engagement to Chris Pratt?

One of Hollywood’s most anticipated, and possibly secret, upcoming weddings is that of Chris Pratt and Katherine Schwarzenegger. But how does the bride-to-be’s famous father feel about his future son-in-law?

Well, according to Arnold, “He did it the traditional way, and he’s a wonderful guy, they both look really great together, they’re both happy together, so I wish them both the best of luck.”

And that’s a good since The Terminator could send shivers down even Groot’s t if he was unhappy about it!

Of course, it probably didn’t hurt that Pratt went the traditional route by asking for her Austrian-born father’s blessing on their forthcoming marriage. Maybe that old-fashioned sign of respect is why his future father-in-law repeatedly referred to Pratt as a “likable guy” and “a great guy” during his interview with Extra’s Mario Lopez.

Since his future bride’s parents are divorced, Pratt took the extra step of also asking Maria Shriver for permission to marry her daughter. Now, that’s a class act!

Arnold and Chris may bond over muscles

Six months no beer. #GOTG Kinda douchey to post this but my brother made me.

Arnold is reported to have once said: “You’ll find, as I did, that building muscle builds you up in every part of your life.” Between his multiple bodybuilding titles, a wildly successful acting career, and almost seven years as Governor of California, we think the ‘Austrian Oak‘ has certainly proved his point. Maybe Arnold hopes that Pratt’s interest in building muscle will translate into an equally strong marriage.

Pratt can’t match Arnold’s muscles, of course. But really, who could? However, the younger action star is no slouch when it comes to working out. Pratt’s workout routine consists of weightlifting, cardio circuits, swimming, mountain biking, calisthenics, and time on a treadmill or rowing machine. Whew! If you’d like to try his workout routine for yourself, head on over to Muscle & Fitness.

Since Arnold also enjoys bodybuilding (of course!), swimming, bicycling, and shooting, he and his future son-in-law may enjoy spending some quality time together in the gym or outdoors. And Pratt could always invite the ‘governator’ to his San Juan Island ranch for some skeet shooting! 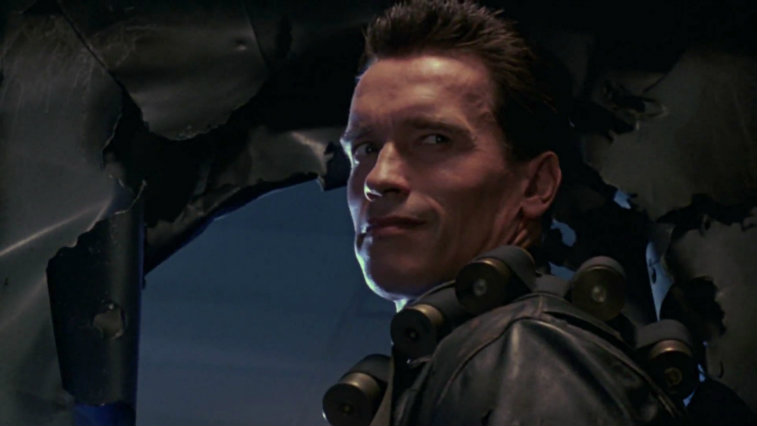 The former action star/governor has an impressive list of movie credits. Maybe he respects Pratt for the younger actor’s growing reputation as an equally good, albeit very different, action star. One source even suggests that Pratt would love to costar in an action movie with Arnold. Now, wouldn’t that be something to see!

Comparing their various action star roles, and planning a dual action adventure, would definitely give the two men something to bond over. Besides their love for Katherine, of course!

… and double the dating!

Pratt and Katherine spent a lively Sunday breakfast double dating with her Dad and his girlfriend Heather Milligan at the Fig restaurant in Santa Monica last November. It’s not the first family meal they’ve shared with her family, although it is the first time they’ve been spotted on a double date. They also shared a post-engagement celebration dinner with Katherine’s mom and brother Patrick, along with Pratt’s adorable son Jack.

Pratt and Katherine even took Jack along on a double date with Jack’s mom (Pratt’s ex-wife Anna Faris) and her new boyfriend! The five went trick-or-treating last Halloween and appeared to have lots of fun doing it. If only all Hollywood families were so classy and supportive!

Maria Shriver’s original comment on the announcement was ecstatic. She posted on Instagram, saying: “Congratulations to two loving, kind, caring, thoughtful, spiritual people. We are so happy for you. You are blessed, as is everyone who knows you. Yes, let’s go.” Later, on the Today Show, she said: “No one wants to hear from me. It’s not my moment. I know nothing, I say nothing.”

She had reason for her excitement, since she played matchmaker for the couple. That’s right, Katherine’s mom set her up with Pratt! The proud mother said, ” She’s super happy — and gave me very strict instructions not to talk about it.”