Scott Morrison will need more than a tight footy jersey with his self-approved nickname emblazoned across the back to persuade his colleagues he’s got his marketing just right this time.

Putting aside the vexing matter of who believes he or almost all of the 60 staff in his office knew nothing for two years about an alleged sexual assault that happened just down the whispering corridor; he’s now reminded that his judgement about saving an oddball backbencher created a smash-up waiting to happen. 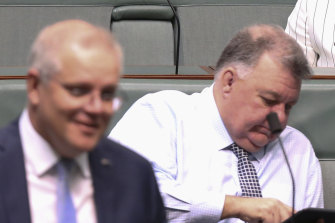 In late 2018, the bellicose Craig Kelly threatened to quit the party if moderate forces were not prevented from going after his pre-selection.

Morrison, at the time a new prime minister with a government in chaos and an election due in a few months, rushed to Kelly’s aid.

He furiously lobbied the NSW Liberal Party’s state executive to endorse Kelly’s pre-selection for his seat of Hughes in southern Sydney.

No matter, apparently, that Kelly’s views on climate change were so at odds with established science that he once claimed the island of Tuvalu was growing, not sinking, and has said the world is cooling rather than warming.

Overlooked was the diplomatic row sparked by Kelly in 2014 when he spoke at a function marking the anniversary of the establishment of the Independent State of Croatia in 1941. “Mortified,” Kelly described himself, when he discovered the group was celebrating a vicious period of fascism. Of course.

And then, in response to the grieving father of three children who died when Russia shot down flight MH17, there was Kelly’s televised comment that “some of the things that Russia has gotten away with in the past has to be slightly looked over” as “the price that we have to pay sometimes to have good relations going forward”.

Kelly back-pedalled furiously, of course, saying his comments had been taken “out of context”.

You might, as a leader, have figured that here was a time bomb in the ranks.

And of course, that is what Kelly has revealed himself to be.

Having got that lifeline from Morrison (and, it should be noted, Malcolm Turnbull previously), he built a vast far-right Facebook constituency.

And then, smack in the middle of a pandemic, Kelly danced off with his followers into a fantasy world in which masks were unnecessary, but drugs championed by Donald Trump and rejected by Australian health authorities were wonderful. Anti-vaxxers flocked to Kelly’s Facebook site, though he claimed not to be opposed to vaccination.

This time, Morrison let it be known he had “hauled in” Kelly for a “dressing down”.

Fat lot of good that did.

Finally, inevitably, Kelly himself has resigned from the Liberal Party that gave him much more slack than he ever deserved.

Morrison, should he ever indulge in a reflective moment, might ponder that just as his government launches the nation’s most ambitious vaccination effort in history, he squandered the chance to vaccinate his party against Kelly more than two years ago.

Instead, Kelly has gone viral and will go to the crossbenches, where he will be free to cause as much mischief as he wishes.