My mother was a big fan of the 1965 film starring Julie Andrews and would screen it once a month, an event the entire family was required to participate in. My siblings and I would take to the nearest staircase, dressed as the von Trapp children. 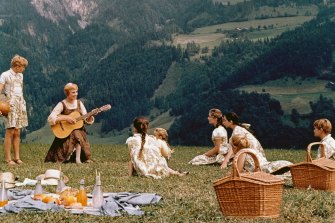 The hills may be alive with The Sound of Music, but inside musicals left me dead.Credit:Getty

Last year, when Christopher Plummer died (he played Captain Von Trapp), the family WhatsApp group lit up in mourning. It was as though an old (really old) uncle had passed away.

The net result of this childhood by chorus line was an instinctive hatred of musicals. It was all too much, too showy: the dancing, the smiling, the bursting into song. By the time I was old enough to develop my own likes and dislikes, musicals were off the menu as my tastes shifted towards:

Hip hop on vinyl and emotional punk rock
Literary fiction and films starring…The Rock.
Anything by Paul McCartney (yes, even Wings)
These were a few of my favourite things.

In my defence, hating musicals is neither an unpopular nor uncommon position; it’s not like declaring you can’t stand rom-coms. The internet is full of articles dissecting why people hate musicals or recommending 10 Musicals for People Who Hate Musicals. There’s even a podcast called I Hate Musicals. 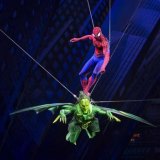 Spider-Man rides on the Green Goblin during a fight sequence during the musical.Credit:

The consensus seems to be that while mildly entertaining, musicals are decidedly uncool. Don’t believe me? Just ask The Edge. The U2 guitarist teamed up with Bono to write the lyrics and music for the musical, Spider-Man: Turn Off the Dark, but during a promo interview with the BBC, he was at pains to distance himself from the genre.

“The thing is, we don’t really like musicals. They’re not very cool,” said The Edge, known for wearing a beanie at all times. “We’re actually not calling it a musical for that reason because we don’t want to put people off.”

Ironically, the Spider-Man musical was part of a movement to Make The Musical Cool Again. Whether adopting popular films for the stage (Legally Blonde, Mean Girls and Shrek have all had the treatment) or tossing out the rule book in favour of mayhem (The Book of Mormon), there’s been an uptick in modern musicals aimed at a modern audience.

But while the musical may have experienced a reputation rehabilitation, I have kept my distance, wary that any return to the genre may trigger my VTSD (Von Trapp Stress Disorder). And then, along came Hamilton, or as the musical’s titular character belts out in his opening number: Enter me.

Few artistic works in recent memory have developed as much cultural currency as Lin-Manuel Miranda’s 2015 musical has. 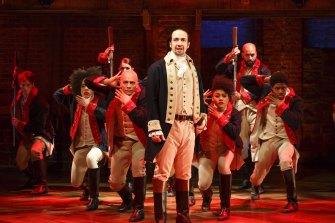 The original Broadway production won a record-setting 16 Tony Award nominations and took home 11. The cast members are now household names, who have been invited to sup at the White House, and Miranda has graced the cover of Rolling Stone (to be fair The Edge and his beanie did too).

To his credit, Miranda, who single-handedly made musicals cool again, refuses to buy into the hype, telling the Financial Times, “they were never not cool to me”.

By the time the show made its way to our shores in March 2021, tickets to Hamilton were the ultimate flex. Now perhaps the only thing I hate more than musicals is missing out, and with the clock ticking on tickets (the Sydney run ends on February 27, before the production shifts to Melbourne on March 16), I bit the bullet and booked a matinée.

Midway through the first number, I found myself budgeting how much I would spend on merch during intermission. 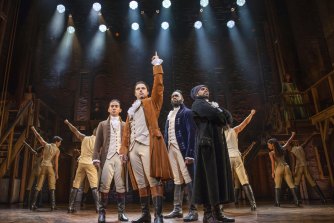 The Australian production of Hamilton opened in Sydney to rave reviews. Credit:Daniel Boud

Hamilton begins with a barnstorming introduction to the leading man, played with slick exuberance by Jason Arrow. The over-the-top optimism I’d come to associate with musicals was still there (My name is Alexander Hamilton, And there’s a million things I haven’t done, But just you wait, just you wait!) but it didn’t bother me.

This was history told through hip-hop, the story of America delivered via rap battle, it was everything, The Sound of Music wasn’t (sorry, Mum), and I loved it.

For nearly three hours, the masked-up matinée crowd was exhilarated and captivated in equal measure. Walking out of the show, I furiously texted my friends to ask if they’d seen Hamilton yet, in much the same way I would following an episode of Succession or the latest Marvel movie.

I was met with a flurry of “of course, I have” responses, even from the non-musical lovers, and I accepted just how late to the party I was. Having experienced Hamilton, I realised I’d deprived myself of so much by sidelining musicals.

I’ve already committed to seeing Dolly Parton’s 9 to 5 (Capitol Theatre from February 16), Girl from The North (Theatre Royal), as well as Mary Poppins (Lyric Theatre from May 15). And when I look at what I’ve got upcoming up this year, these dates are a few of my favourite things.

A cultural guide to going out and loving your city. Sign up to our Culture Fix newsletter here. Tour dates to comes. Please leave space.